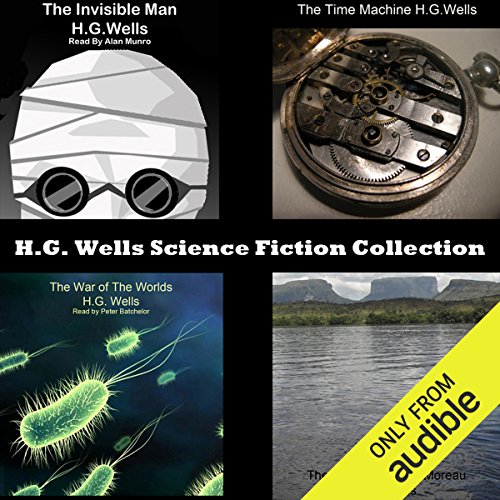 Four classic science-fiction stories: 20 hours of great listening. This collection of classic Wells tales includes The Invisible Man, The Time Machine, The War of The Worlds, and The Island of Doctor Moreau.

Good heavens! Don't believe the other reviewers about the narration. Alan Munro is by far the best of the three, I love his accent. Give me more of him. The narrator for Dr. Moreau and the Invisible Man was the same, but I saw his narrating style as being quaint and adequate for the time period. George Eustice's narration of War of the Worlds was totally within reason, and yes, there were some weird noises in the background. But hey, twenty hours of a great science fiction writer like H. G. Wells, gimme a break! WELL WORTH THE PRICE, PEOPLE! WELL WORTH THE PRICE.

H. G,. Wells is a notable author. I have been familiar with his work since Abbott and Costello Meet the Invisible Man. War of the Worlds in 1956 was one of the scariest movies my child's mind ever grasped - scared the hell out of me for weeks! I was not familiar with the Dr. Moreau piece, except in a peripheral sort of way as I am not a fan of horror films, so I can't comment too much on that. As a matter of fact, I glossed it over for the next book. Maybe I'll go back to it one day. Now the Time Machine with Rod (What's his name) was a great flick, and until I read this collection, I was not aware of how closely the film followed the book.

Now for the big reveal. All of the film versions that I remember were updated adaptations of the original work. The Invisible Man? I had no idea that the main character was so demoralized by his self-induced fate that he decides to take it out on the entire world. He turned out to be Lex Luthor, for God's sake. Mean just to be mean. What an eye opener. He seemed harmless enough in the Abbott and Costello movie, and I left it at that. But Wells shows through excellent character development how this man (told in first person) begins to deteriorate slowly as he desperately tries to figure out what he did to get in that state in the first place. Wells was a writer of contemporary fiction a la 1890s, and the descriptions he gives of the environment and the people who come across the invisible man are sensible for the 19th century and when placed in that context it was gripping, to say the least.

War of the Worlds is another story that has been corrupted over the last century. Although 1956s version is FAR superior to the more modern costly digital disaster, neither of them puts the story in its time perspective. London - 1895. Horses and carts, No huge buildings, largely an agrarian population, and the ability to stand on a hill and look over the city. The descriptive passages were amazing. I felt the angst of this man as he struggles, along with everyone else, to figure out what the hell is going on. Instantly, the entire city is in turmoil, with no relief in sight. Although we know the ending, the narration of the desperate lengths the main character goes through, the descriptions of the bodies left everywhere, dogs chewing at corpses, people fighting and robbing each other for anything and everything, and this man doesn't know what has happened to his wife. No film version can adequately depict the two weeks that he hid in the collapsed cottage, with the Martians at arm's length just outside the rubble.

Lastly, the Time Machine was perfect. The film version was faithful, but the story fleshes out the character and the environment so much better. Can you imagine? Science fiction in the 19th century?

Let me say this. I have bought some low-budget books in my time that I was immensely gratified to have made such a little dent in my pocketbook. They were garbage. At the same time, I have paid the member price for other books that I would have happily ripped to shreds they were so bad. But once in a while, something comes along that makes it all better. This collection of H. G. Wells classics is one of those.

Would you try another book from H. G. Wells and/or the narrators?

Yes on H.G. Wells, of course. I cannot fault all three narrators; but one of them I will avoid forever.

They are familiar classics to all science fiction fans and it is great fun to exam them afresh and see "what's really there." Wells has a lot to say.

This Audiobook has some very curious and highly irritating flaws. Although Peter Batchelor, narrator of the "Moreau" and "Invisible Man" books, has a perfectly wonderful, deep announcer's voice, his speech patterns are halting and maddeningly irregular. Sentences are forever falling away into fragments like lost Lego blocks. Narrative rubato? I think not. It's just plain weird. It is possible, however, to get used to it. Self-hypnosis might help. And then, in "The Invisible Man," some mischievous hacker (I suspect) has added some isolated background screams here and there, with a truly comic effect. It's just got to be a college prank played on the recording company. Batchelor also mispronounces some words: "satyr" becomes "satire" for instance. The French word "rit" ("laugh") becomes "ritt."

George Eustice is much better on "The War of the Worlds," but there are very curious background noises going on, not unlike old tape recorders being rewound, and sharply noticeable audio splices occur over and over. Alan Munro's "The Time Machine" is the least troubled of the recordings.

For the money, it's great -- but the low price surely reflects the fact that the publisher knows there are some big problems here.

I think we have all seen the movies by now! "Island of Lost Souls" (1933) is my favorite, but Wells loathed it and never granted his approval on the script. It's fun to read the original story to find out why!

With all their scientific improbabilities and impossibilities, H.G. Wells' tales are nonetheless the fount of much of today's speculative fantasy fiction. This collection, a real bargain for the price (or so it seems to me) contains the first great writings about an invasion from outer space; new human species engineered through (immoral) scientific means; the possibility of time travel and the horrors the future may hold for Man; and the dangers of experimentation with drugs that might render you invisible and turn you into an evil megalomaniac.

Lots of this stuff is utterly ridiculous, but Wells's aims go well beyond fairytale musings. "The Island of Doctor Moreau" condemns vivisection and warns us that we may at any time lose our humanity and revert to our beastly natures: Wells's hero is very much like Gulliver, and Swift is Wells's model. "The War of the Worlds" is violent and horrible, but it is also satirical in its view of late 19th-century English society and its pretentions to world power. This book too is a caveat against our losing our humanity and becoming like the genocidal Martians. "The Time Machine," perhaps the best of the novels, sees a predatory and evil caste system lurking in the future, while "The Invisible Man" takes the ageless fantasy of invisibility into a overt statement about the way such a dream can corrupt the dreamer. This is Wells's least new idea: we see it as far back as Marlowe's "Doctor Faustus." Wagner and Tolkien also link invisibility to corrupted morality.

At any rate, these are essential science fiction stories.

The narration was too jerky, this may just be a personal preference, but I couldnt listen long to his pauses in odd spaces. Ive always loved HG Wells' stories, but couldnt take this narration.

What was one of the most memorable moments of H.G. Wells Science Fiction Collection?

I love HG Wells' stories, but couldnt listen to this collection.

Would you be willing to try another one of the narrators’s performances?

Stick to the paper version!

The narrator(s).
These readers cannot be professionals. These books sound like many of the free, public domaine books offered on many other sites.

I've seen three movie versions of "The Island Of Dr. Moreau. The 1932 film was the best and more enjoyable than the book.

Island of Dr Moreau: I found myself hating the characters. I was rooting for the "beast men" and hoping they would kill the protagonist.

I'm unable to finish this compilation - the reader ("...Moreau" and "Invisible Man") is more than I can handle. He's terrible.

Alan Munro was the worst. So disjointed. Who hired this guy?

I have been doing commercial voice overs for over 30 years and if I did a read anything like 2 of your narrators I wouldn't get any work. How could Audible let this happen? I am very disappointed.

The narration was the worst I've ever heard. Aside from his strange pronunciation of the simplest words, he took strange pauses in the middle of sentences reminiscent of a child just learning to read, having to sound the words out in his head before saying them aloud. I will never purposely download anything narrated by Peter Batchelor again, and I will probably avoid anything produced by Trout Lake Media as well.

This was the first book I remember reading way back in grade school; serious science fiction, not Dick and Jane. It still is my favorite in so many ways. Calling him "THE TIME TRAVELER". Genius! His description of duration as a physical thing, one we are just beginning at sub-atomic levels to understand. Genius! He was truly visionary; far, far ahead of his time.

Great stories, performance lacking. Very monotone, no character voices or tonealities. All books are 1 track in a series, sequential chapters. no way to differentiate 1 book from another by chapters.

Stories are as good as ever!

H. G. Wells wrote such marvelous stories - whether this audio book or in any other form, I highly recommend them.