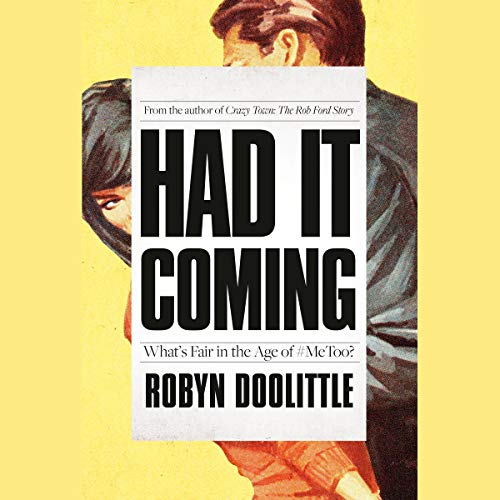 “A decisive snapshot of this moment in history that considers where we were, and sets the stage for where we might go, and will no doubt be used to describe this moment long after we move on to a new normal.” (Zoe Whittall, author of The Best Kind of People)

An illuminating, timely look at the changing landscape of sexual politics by the author of Crazy Town.

For nearly two years, Globe and Mail reporter Robyn Doolittle investigated how Canadian police handle sexual assault cases. Her findings were shocking: across the country, in big cities and small towns, the system was dismissing a high number of allegations as "unfounded". A police officer would simply view the claim as baseless and no investigation would follow. Of the 26,500 reported cases of sexual assault in 2015, only 1,400 resulted in convictions.

The response to Doolittle's groundbreaking Unfounded series was swift. Federal ministers immediately vowed to establish better oversight, training, and policies; Prime Minister Trudeau announced $100 million to combat gender-based violence; Statistics Canada began to collect and publish unfounded rates; and to date, about a third of the country's forces have pledged to review more than 10,000 sex-assault cases dating back to 2010.

Had It Coming picks up where the Unfounded series left off. Doolittle brings a personal voice to what has been a turning point for most women: the #MeToo movement and its aftermath. The world is now increasingly aware of the pervasiveness of rape culture in which powerful men got away with sexual assault and harassment for years: from Bill Cosby, Harvey Weinstein, Bill O'Reilly, and Matt Lauer, to Charlie Rose and Jian Ghomeshi. But Doolittle looks beyond specific cases to the big picture. The issue of "consent" figures largely: not only is the public confused about what it means, but an astounding number of police officers and judges do not understand Canadian consent law. The brain's reaction to trauma and how it affects memory is also crucial to understanding victim statements. Surprisingly, Canada has the most progressive sexual assault laws in the developed world, yet the system is failing victims at every stage.

Had It Coming is not a diatribe or manifesto, but a nuanced and informed look at how attitudes around sexual behaviour have changed and still need to change.

What listeners say about Had It Coming

A definite must listen!

I found this book to be extremely interesting and eye opening with a lot of insights (some good, some bad) on the #metoo movement, the relationships between men and women, and the societal structures both helping and hindering progress in this area. I thought it was exceptionally well researched and very well balanced. I highly recommend this book for both men and women.

I feel informed and empowered.

I greatly enjoyed all the unique perspectives/interviews offered up on the subject of the me too movement and sexual assault cases. It's full of stories that many women have definitely experienced and can connect with. This book is a great tool that can help us feel informed in order to break down some of the lingering aspects of rape culture. I recommend women AND men to read this :).

Such a great read!

I could not put this down. Robyn Doolittle tackles this subject from so many angles. It is clear that she is genuinely looking for answers to questions that no one was even asking. A fresh and eye opening dissection of the layers of challenges involved in getting justice for sexual harassment / assault complainants.

Loved how well researched everything was. The author researched things how I expect journalists should however I know many don't.

It had its good parts but I was disappointed

Seeing that there are not really Canadian books on rape culture, I was excited to get this book. It had a lot of good information, I just found at times she let biases show. Also I feel the author has an extremely naive belief in the police, if she had done more research on instances that the police make “task forces” to deal with an issue, she would see how they do this for show. I am still glad I bought it, but unless someone is looking for Canadian statistics, I will recommend another book that’s written on rape culture. Hopefully she inspires more Canadian authors to write on the subject. I don’t find it horrible, just that it wasn’t what I was expecting or had hoped for.

I’ve been a fan of Robyn Doolittle’s for a while now, and always enjoy her writing. This was no exception. This is a must read.