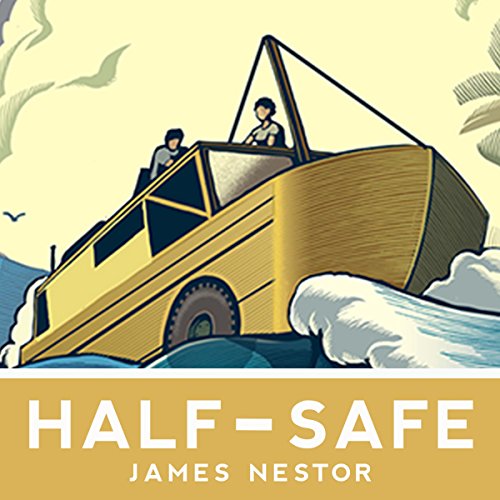 In 1948, a young Australian mining engineer named Ben Carlin set out to do the impossible: circumnavigate the globe, by land and sea, in a single vehicle. The vehicle in question was an amphibious jeep developed by the U.S. Army, which Carlin christened Half-Safe, after a deodorant slogan. It was a mechanical mongrel that was supposed to move with equal ease across land and water but in practice wasn't much good for either one. Undaunted, Carlin and his wife Elinore set off across the Atlantic Ocean with dreams of fame and fortune, and of carving a small notch in history.

What happened next is one of the most bizarre, remarkable, and forgotten adventure stories of the 20th century. In Half-Safe, author James Nestor endeavors to uncover Ben Carlin's fate and finds a gripping story of love, danger, and extraordinary perseverance that spans three oceans and five continents. Half-Safe takes us from the eye of an Atlantic Ocean hurricane to the sweltering Sahara to the impenetrable jungles of Southeast Asia - and into the mind of a man who could overcome everything but his own demons.

What listeners say about Half-Safe

whats with the jingles?

As my title says weird adventure story. Kind of a sad tale. Wouldn’t recommend to anyone unless you’re in bens position- stuck at sea going between 2-4 miles per hour.