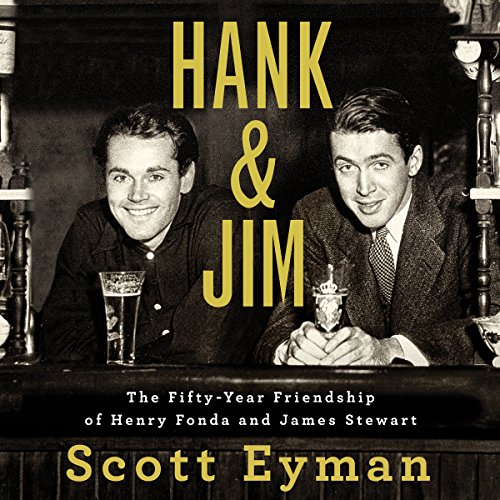 Written by: Scott Eyman
Narrated by: David Colacci
Try for $0.00

New York Times best-selling author Scott Eyman tells the story of the remarkable friendship of two Hollywood legends who, though different in many ways, maintained a close friendship that endured all of life's twists and turns.

Henry Fonda and James Stewart were two of the biggest stars in Hollywood for 40 years. They became friends and then roommates as stage actors in New York, and when they began making films in Hollywood, they roomed together again. Between them they made such memorable films as The Grapes of Wrath, Mister Roberts, Twelve Angry Men, and On Golden Pond; and Mr. Smith Goes to Washington, Destry Rides Again, The Philadelphia Story, It's a Wonderful Life, Vertigo, and Rear Window.

They got along famously, with a shared interest in elaborate practical jokes and model airplanes, among other things. Fonda was a liberal Democrat, Stewart a conservative Republican, but after one memorable blow-up over politics, they agreed never to discuss that subject again. Fonda was a ladies' man who was married five times; Stewart remained married to the same woman for 45 years. Both men volunteered during World War II and were decorated for their service. When Stewart returned home, still unmarried, he once again moved in with Fonda, his wife, and his two children, Jane and Peter, who knew him as Uncle Jimmy.

For Hank and Jim, biographer and film historian Scott Eyman spoke with Fonda's widow and children as well as three of Stewart's children, plus actors and directors who had worked with the men - in addition to doing extensive archival research to get the full details of their time together. This is not another Hollywood story, but a fascinating portrait of an extraordinary friendship that lasted through war, marriages, children, careers, and everything else.

What listeners say about Hank and Jim

Sometimes when one hears an audiobook or reads about Hollywood legends, it paints a picture so different that one can't enjoy seeing them in movies anymore. After all, acting is a job, and if people are doing their job then their personal life is their own business. I believe that as an adult. But I also know that through much of the 20th century, studios ran their actors' personal lives - with morals clauses, etc. They wanted the public to believe the actors weren't acting. Most did. Even now, people will judge people on TV and in the news by how they think they come across without knowing them personally at all....politicians, actors, news people. To some degree, anyone knowing they are appearing in front of a camera is acting.

As in most lives, Fonda and Stewart were complicated people - early on living together on a shoestring as actors in summer stock and in NYC - and competing for stage and screen roles. Both served in WWII in perilous positions, with Jimmy Stewart flying as a many dangerous bombing missions. Stewart continued his military career in the USAF Reserve and was promoted to a Brigadier General in 1959, retiring in 1968. Stewart was also only married once - Fonda a number of times. Yet they were very different people - Fonda was not a fan of the "red scare" perpetuated by Joseph McCarthy against Hollywood actors in the 50s. Stewart was a staunch conservative. They set aside their politics to remain lifelong friends.

The book doesn't pull any punches about the men's personal lives, but explains why and how their personas on screen sometimes reflected their real lives - and sometimes were the opposite. Loved the book - narration was very good.

What does David Colacci bring to the story that you wouldn’t experience if you just read the book?

The narrator was able to adopt many of the featured personalities' (male and female) general voice/tone when speaking their 'lines," without it coming across as an over-the-top impersonation. As an Audible, it made it more interesting to listen to + he did the voices extremely well.

The Story of a Wonderful, Moving Friendship

In this time of quarantine I intended to catch up on my reading, but after 4 weeks I had yet to get through even three chapters. Nothing could distract me from the news updates. So I decided to give “Hank and Jim” a try. I don’t know any greater praise for a book than to say “I hated to see it end.” For a boomer like myself, this book describes the time of our parent’s generation through the life of these two famous actors. The strength of their friendship was the central theme of the book, but it is also a thorough biography of each of them. Along the way we learn about the life’s of many of their closest associates in the movie industry. The narrator does a very good job, neither bland nor over the top. The story is well paced and never bogs down. I plan to listen to it again sometime soon.

This was an excellent book, the story of Hank and Jim's friendship was well written and researched. I enjoyed all the quotes, and stories from family and friends. It warmed my heart to hear of the great friendship that they had with each and the other great friends they met in the University Players.
I would highly recommend this book.

These two were great friends but had the very rare courage to looks past their differences, especially politics....... They had 1 big argument then agreed, because of their friendship, to never discuss it again.
How different these two men were.. FONDA was married 5 times, STEWART married once for 40+ years
FONDA was more a stage actor where STEWART was more into movies..
FONDA was a very liberal democrat where STEWART was a conservative Republican
FONDA died at age 82, STEWART lived until age 89,,,,,,but in truth, Jimmy STEWART quite living 3 years earlier when his Gloria
died when he was 86..he lost the love of his life, and those who were close to him said, Jimmy was never the same. in fact,, it is reported that his last words were ;;;Now I am going to be with my Gloria....
Anyway, Listen to this book if you have any interest in either Fonda or Stewart, You'll be glad you did ! ! ! !

good story and very interesting history. never knew how closely they were friends behind the camera.

Having enjoyed the movies of both actors, this book was very interesting. Seems well researched and narrated.

Interesting work on the relationship between Jimmy Stewart and Henry Fonda. Not written for scandal and limited analyzing ….

This was a really well told story of two legendary actors which brought together their lives with other Hollywood legends in an engaging manner.

I loved listening to the story of two of my beloved actors Henry Fonda and James Stewart. I loved hearing about their long friendship and all the highs and lows Of their lives off screen. Excellent narration