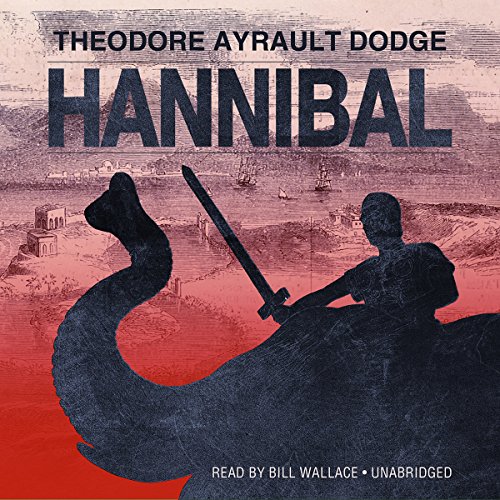 Hannibal is often considered the finest general the world has ever known. Setting out from Carthaginian-dominated Spain with a small army of select troops, he fought his way over the Pyrenees and crossed the Alps with elephants and a full baggage train. Descending into Italy, he destroyed the main Roman army at Lake Trasimeno and came close to conquering Rome itself. At Cannae, Hannibal’s brilliant cavalry tactics enabled him to destroy a reassembled Roman army, and his subsequent defeats over a 15-year stay in Italy were due more to lack of sufficient support from home than to any failings of generalship.

Theodore Ayrault Dodge’s classic history, first published in 1891, is equally perceptive of Hannibal’s military prowess and his visionary character. Dodge followed Hannibal’s route from Carthage to Italy, paying particular attention to the famous crossing of the Alps, exploring every pass in order to determine Hannibal’s route. In this book, he wrote an entire history of the art of war among these two mighty armies. Hannibal remains unequaled as the most comprehensive and readable study of history’s greatest general.

“[This book] has never been bettered.” (Michael Grant, author of History of Rome)

What listeners say about Hannibal

Top notch book from the past.

The detail in this book was amazing. I've found few books dealing with this subject that had the detail and insight provided by the author. Not only was the author a civil war veteran giving his insight to battle strategy but he had also studied the accounts of ancient authors and visited the battle sites. Because the book was written in the late 1800's the fog of time was not as thick as it is now. I also enjoyed the authors insights from his perspective as an officer and how different tactics from the American civil war were similar or different. Overall outstanding book to listen to and I wish all the books by this author were available on the audible format. If they were I'd buy them all because this book was that engrossing and informative.

What was one of the most memorable moments of Hannibal?

His strategy for crossing of the Alps.

The account of the famous strategic battle of Cannae. The author gave excellent insight into all the major characters involved in the action.

The tragic inability of Hannibal to receive the support from Carthage he needed to finish the Roman army and force a peace agreement.

History in brief, politicians in detail

History in brief. Not a detailed military text, maneuvers given in broad detail. Fairly dry material and preformed in a like manner.
Details on roman organization, arms and politicians. Hero worship of Hannibal throughout.

This book is great if you what to learn more about one the most interesting conflicts in history. You can really notice that the author knows a lot about the subject and he constantly adds valuable insight of his own (since he was a veteran of the American Army). Bill Wallace does an amazing job narrating and he was a good pick for the job because the author probably had the same accent.
In conclusion, i truly believe this is a great audiobook and it was worth the money.

A comprehensive military history of one of the greatest field generals of all time. I could literally picture all of the battles in my head.

Theres a ton of information in this book and its presented very well. In the world of military history there are some open questions surrounding some decisions Hannibal made, most notably his decision to not march on Rome. This book provides a wealth of information that, to me, makes it clear why he did not. This attention to detail is quite possibly the best part of the book.

An ok book about Hannibal

This book was so detailed, it is definitely a great work but it become so boring that I could not finish it. I would be more satisfied if this book would be more exciting instead of too focused in boring details soo often with almost no action in relation to details given.

Great book if you can speak french

Autor likes to quote Napoleon in french. He apparently also wrote a book on Alexander the Great which he refers several times for example: instead of explaining how phalanx works he just says to see his previous work on Alexander ....

Highly detailed as possible from extant sources. Very little on anything other than war.

Was overall very pleased, the one exception being that the author quotes Napoleon in French but doesn't give translation.