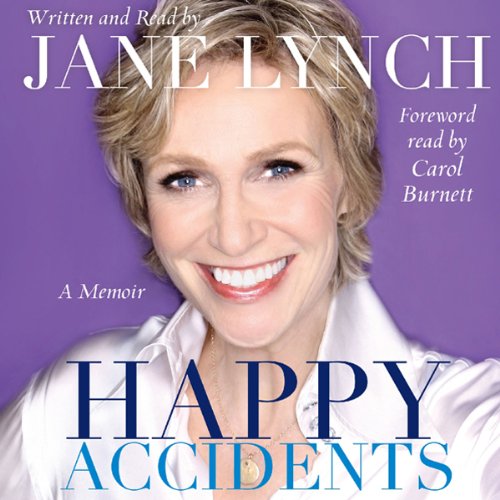 In the summer of 1974, a 14-year-old girl in Dolton, Illinois, had a dream. A dream to become an actress, like her idols Ron Howard and Vicki Lawrence. But it was a long way from the South Side of Chicago to Hollywood, and it didn’t help that she’d recently dropped out of the school play, The Ugly Duckling, or that the Hollywood casting directors she wrote to replied that "professional training was a requirement".

But the funny thing is, it all came true. Through a series of happy accidents, Jane Lynch created an improbable—and hilarious—path to success. In those early years, despite her dreams, she was also consumed with anxiety, feeling out of place in both her body and her family. To deal with her worries about her sexuality, she escaped in positive ways—such as joining a high-school chorus not unlike the one in Glee—but also found destructive outlets. She started drinking almost every night during her freshman year of high school and developed a mean and judgmental streak that turned her into a real-life Sue Sylvester.

Then, at 31, she started to get her life together. She was finally able to embrace her sexuality, come out to her parents, and quit drinking for good. Soon after, a Frosted Flakes commercial and a chance meeting in a coffee shop led to a role in the Christopher Guest movie Best in Show, which helped her to get cast in The 40-Year-Old Virgin. Similar coincidences and chance meetings led to roles in movies starring Will Ferrell, Paul Rudd, and even Meryl Streep in 2009's Julie & Julia.

Then, of course, came the two lucky accidents that truly changed her life. Getting lost in a hotel led to an introduction to her future wife, Lara. And then a series she’d signed up for abruptly got canceled, making it possible for her to take the role of Sue Sylvester in Glee, which made her a megastar. Today, Jane Lynch has finally found the contentment she thought she’d never have.

Part comic memoir and part inspirational narrative, this is a book equally for the rabid Glee fan and for anyone who needs a new perspective on life, love, and success.

Read by the author, with a foreword written and read by Carol Burnett.

"A triumphant memoir recounting the inner struggles of one of the most versatile actresses working today…Achingly sad and sweetly comic at the same time." ( Kirkus)
"[A] frank, engaging, and at times uproariously funny autobiography of a roller-coaster life." ( Vogue)

What listeners say about Happy Accidents

Jane is a joy to listen to, her inflection, vocal tone and verbal flow was perfect and highly enjoyable.

I'm so happy that I got to know Jane Lynch. Her story is an interesting one and she tells it amazingly!

I give this book five stars because it delivers as promised and the fact that I didn’t like it is rather a reflection of my poor choice in having selected the book (it was on sale) than the quality of the author’s work. Celebrity lives just aren’t all that interesting and even the most talented actors do not necessarily (or likely) have the literary skills to write compelling stories about themselves. After having read some other celebrity memoirs - “Stories I Only Tell My Friends” (Rob Lowe), “The Elephant to Hollywood” (Michael Caine) - I shouldn’t be surprised that this book fell flat for me. “Happy Accidents” follows the predictable formula of many in this genre: the misfit/defiant childhood, insecure adolescence, years as a struggling actor, first break, climb to greatness, and all the wonderful people who helped along the way. If you’re a huge fan of Jane Lynch and have seen most of her work, you’ll probably appreciate her book. If you’re looking for a good piece of literature with novel insights, then you may want to pass on this one.

I really wanted to love this

I so wanted to love this book, since I've loved Jane Lynch in virtually everything I've ever seen her in -- from The Forty-Year-Old Virgin to O Sister, My Sister. But her life story, as it turns out, is much too thin to support an entire book -- at least in this well-scrubbed, mild-mannered telling. Coming-out stories just aren't enough to warrant autobiography, at least not anymore -- and particularly not when coming out seems as painless and matter-of-fact as it seems to have been for Lynch. Moreover, everyone she's ever met is just super -- incredibly nice, warm, unpretentious, etc. Everything that's ever happened to her has at least one (if not two, or three) silver linings. And life is pretty much uneventful and awesome, such that whole hours of this audiobook can be spent (and are) on the life-changing dilemma of what color to paint the master bedroom in her fabulous new house.

I enjoyed it overall, although Jane Lynch's life hasn't really been dramatic or traumatic enough to put this at the level of tell-all Hollywood bio, and she doesn't dish about other stars much, either.

All that's undoubtedly to her credit, but it doesn't exactly make for a page-turner. Still, if you like her work in Glee or anything else she's done, it's a pleasant listen. Not up to the humor in Tina Fey's Bossypants, but interesting enough for listening while driving or walking.

I'm not sure she could have changed it. It was honest, or at least, honest enough.

Her struggles with coming out were probably the most interesting parts of the book.

Was Happy Accidents worth the listening time?

Overall, yes, but I'm a fan of her work.

I would recommend this book. I enjoyed the book, I loved listening to Jane.

I enjoyed hearing her story about coming to terms with herself, and how she evolved over the years.

A name dropping blow by blow of average

What would have made Happy Accidents better?

Less detail of every person's name, every show, every flight etc. After a while just felt like a long thank you to every person she had ever talked to. And every instance was an "it was amazing." “I was so happy”.

It was great to hear the actual author read the book.

Many of the personal stories were insightful and interesting to hear about.

Unlike Bossy Pants by Tina Fey where I laughed through most of the book, Jane Lynch’s story was lacking humor. The last few chapters are slogging through every show she was ever on and every person she ever talked to … it was drudgery.

Will the real Jane Lynch please stand up!

Hearing Jane's telling of her life makes her more likeable and real to me now!

What other book might you compare Happy Accidents to and why?

Jane's voice, with her sly vocal movements make it so much more consumable.

Will the real Jane Lynch please stand up!

Would you listen to Happy Accidents again? Why?

I might listen to it again, or to parts of it that are particularly compelling and that describe transformative moments in the writer's life.

It's an autobiography so obviously the favorite character is Jane Lynch, the author and narrator of her own story.

Anytime an author narrates his or her own autobiography, it's a plus. A third-person narrator often misses the appropriate tone for specific incidents and feelings that are being conveyed. Carol Burnett's foreword did not add much. It seemed more like a kind of requisite endorsement from an established comic actress (

An unlikely star sees all her dreams come true.

Much better than I expected

What made the experience of listening to Happy Accidents the most enjoyable?

The entire book: from hearing Carol Burnett's voice as well as Jane's, hearing about Jane's,

What was one of the most memorable moments of Happy Accidents?

What about Jane Lynch and Carol Burnett (foreword) ’s performance did you like?

All of it. Well read/written.

All of Jane's experiences.

I really enjoyed listening to Jane’s story, especially that she told it, she was a pleasure to hear.

This was so well done. Great and honest story. Awesome to have story teller telling their own story.