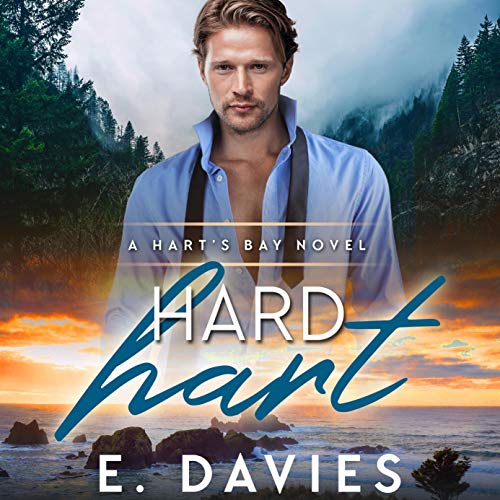 Written by: E. Davies
Narrated by: Greg Boudreaux
Try for $0.00

I felt all wrong until I met you.

Jesse Stone is rebuilding his life. He’s ditched his no-good ex, sworn off men, moved to a new town with his four best friends, and started the pottery business of his dreams. And then he slept with his hunky new neighbor. Oops. Jesse needs to focus on work, but all he can think about is getting Finn between his hands like a perfectly-shaped work of clay.

Trouble just blew into town, and his name is Jesse. Finn Hart knows that pursuing Jesse will ignite old family tensions, but he can’t stay away. The construction foreman has never built a lasting relationship. He’s too busy keeping the peace in a town that was founded by one Hart, but is slowly being strangled by another - Finn’s grandfather.

Finn and Jesse are on the same page: they want to save Hart’s Bay, and it starts by bringing tourists in with Jesse’s new art gallery. But their hearts are bruised, and taking a chance comes with a price. Not everyone in Hart’s Bay wants change. For a few narrow minds, nothing good should come to Finn’s branch of the Harts, and that includes love.

Can love wash away 20 years of bad blood and bring a new dawn for Jesse, Finn, and all of Hart's Bay?

Hard Hart is the first book in the new Hart’s Bay series about a small town full of nosy but well-meaning neighbors and brotherly banter. It’s a stand-alone novel with a happily-ever-after ending, and plenty of smiles and steam along the way. If that cove could talk…oh boy, has it ever seen things.

What listeners say about Hard Hart

Sexy with a dash of mystery and family drama

4 Blue Roses
4 Blue Flames
Sexy with a dash of mystery!
Narrator Greg Boudreaux gave a superb, well-rounded performance filled with dramatic tension which stirred a hunger to hear every ravishing moment in this exceptional contemporary romance.
The most memorable scene was the heart pounding, beautiful fornicatication up against the rocks at the beach in open air.
This was the perfect kick-off to a fantastic new series.
I loved the drama, intrigue and secrets yet to be revealed about Hart’s Bay. The plot and character development was well rounded, with the right amount of mystery sprinkled on top.

I definitely recommend this audiobook if you like romance and drama. I will be listening to the rest of the series.

Finding your Hart and learning to love!

Delightful discover of friendship, love, acceptance and the inspiration for a town coming together. I loved the narration, it really brought the characters alive to me.  I really enjoyed reading this book, but the audible version just makes it really awesome!

I just so enjoyed these two MC's and their honesty, caring, insecurities and hopes all blended together to create the perfect balance of finding love and happiness together.

Jesse and Finn have a very intense and wonderfully steamy connection and i loved how they explored.  These guys are both lovable and i would want to live near and work with these guys.  I loved their back stories and how they found their way to grow and become more than they were apart.

A solid group of friends, artists, join together to rent a building for a studio to work in and gallery space to showcase their pieces.

I enjoyed the friends' interactions within the group and with the locals in town. An old family feud, though, is threatening to break the friendships the artists have made. Do they need to understand the feud to bring joy back into the town?

Narrator Greg Boudreaux excels at character personalities, and pinpointing key phrases to make the story one you will listen to again and again.

Overall the story was well written and the characters were well defined.
The narration was done well and Greg has a great voice to mix things up.
A small town romance with an internal feud going on makes for a good start to having a nice story line.

Thank you Ed for letting me listen to this audio.

Hard...in all the right ways!

I REALLY LIKED this novel more than the 3 Stars imply. I listened to a fabulous narration by Greg Boudreaux who brought the characters to life!

The first half of this hook-up turned relationship book was FUNNY and HOT 🔥🔥! Davies can write a hell of a sex scene full of dirty talk!!

The two MCs had fantastic chemistry and some good tension. Them I liked.

What made this a 3 star read instead of a 4 Star was the OTT plot which revolved around a long-standing family feud and major homophobia. It felt quite contrived.

But...like I said, I truly enjoyed this and will definitely listen to the next books in the series!

My rec? Give it a shot (thanks Trio for putting this series on my radar)!!

I loved this story the first time I read it. Greg's narration is perfection and brings even more life to such wonderful characters. You will not be disappointed when you listen to this story.
Jesse is trying to make his dreams come true and he plans on doing it without getting distracted. Finn is the best distraction, b it he comes with baggage that could ruin Jesse's chances to reaching his dreams. These two need to overcome the obstacles in their relationship to both reach for what they want.

A brand new series by E. Davies set in the small town of Hart's Bay in the Pacific Northwest. Jesse, an artist, moves to Hart's Bay with his four best friends, and promptly hooks-up with his new neighbor (without either of them knowing they were ever going to see each other again!)! Finn has not only grew up in Hart's Bay, but his family is who founded the town. Now though he is working to improve the town, not everyone in his family feels the same way. In addition to this, they are also homophobic, and Jesse & Finn's new connection raises some family tensions. But can these two men work together to go against Finn's family and help save the town? Or will they let their pasts, his family and some narrow minds drive them apart?
This book is one that has so much going on in it, but it all fits together so well that the book was a great read. There are some difficulty parts of the book that include some homophobia and harassment, but the relationship between Jesse and Finn and the friendships between Jesse and his friends makes those parts a little easier for me to read. The family aspect of the book is intriguing and watching Finn go against his family for who and what he really wanted was nice. The small town feel was spot on - E. Davies truly nailed what it is like to be in a small town.
Greg Boudreaux nailed it with the narration! The characters’ voices were unique and easy to listen to and distinguish!
Overall, this was a great opening book to the series, and I'm looking forward to the next in the series!

What a Hart Wants

Fin is a man burdened by a terrible sense of responsibility. Believing that because he is a Hart that he has a duty to the citizens of the beautiful but declined town named for his family, Hart's Bay. He does what he can to improve the lives of those living in the city as do his part of the Hart family (referred to as "good Harts") but their efforts are constantly undermined by the "bad Harts" (Think Hatfields and McCoys except all within the same family it's brutal).

Jessie found the courage to leave an abusive relationship standing up for himself wasn't easy and he is marked by the relationship and has sworn that he will not be put in that position again. With the help of a motley crew of amazing friends he sets out to create a new life for himself. Life in a small town may be just what the doctor ordered but is the reclusive community ready for a gaggle of proud men to enter their city?

Fin meets Jessie and sparks fly but Jessie is determined not to be distracted by anyone, this is his life and he has to make it work, dependent on nobody...but maybe Fin is just what he needs a friend and possibly more. You can never have to many friends right? And passion...what is life without passion. Passion creates art and he is an artist so it's kind of job requirement and it's something that has been missing for so long. But will he get distracted by the power of this beautiful man with haunted eyes? Will Fin chase Jessie away when the family feud threatens Jessie's new life?

Listen to the melodic voice of Greg Boudreaux and find out. I personally cannot wait for the rest to come out. Greg is outstanding as always and E. Davies knocks this one outta the park.

Good story sprinkled amongst the sex

Good story sprinkled amongst the sex.
Likable characters, even the bad guys.
Good story.
Lots of sex scenes, perhaps a little too many. Sometimes more is just more. A little fewer would actually be better, more anticipatory, if you get my drift.
Excellent narration by one of my all time favs.

Jessie and his friends arrive to a small town for a new start and business. Finn has dealt with his family's feud for years, and he does not even know what its for. Jessie challenges him in all the best ways, but they must decide if relationship is worth the pain.

I loved this book! It will be definitely be on my list to listen to again!