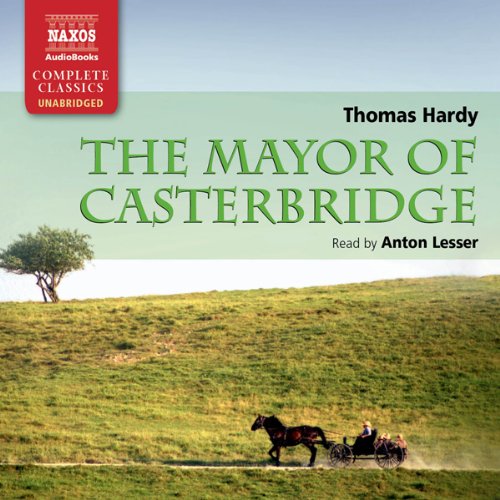 Hardy: The Mayor of Casterbridge

Written by: Thomas Hardy
Narrated by: Anton Lesser
Try for $0.00

Michael Henchard, drunk at a country fair, sells his wife and baby daughter for five guineas. The following day, in despair and remorse, he forswears alcohol and sets out to redeem himself. In time, he becomes a respected merchant and eventually the mayor of the town. But Fate is not to be so easily appeased, and Henchard finds his past actions resonate through and destroy his plans for the future.

One of the greatest novels in the English language, The Mayor of Casterbridge sees Thomas Hardy at his best, bringing landscape and richly imagined characters to life, and setting the hope of love against the forces of Providence.

What listeners say about Hardy: The Mayor of Casterbridge

Loved the story from beginning to end

I wondered whether I'd enjoy Lesser's voice. His narration of Hardy's bittersweet tale was absolutely spot-on and simply brilliant! I simply couldn't get enough of the book and was sorry when it was finished. But it tidied up nicely at the end leaving the listener satisfied. This is my second read of Hardy and first of Lesser and I'll be searching more books from these two. I will most likely be listening to this book again. I completely recommend this book!

If Anton Lesser ever gets tired of narrating Dickens, he can always do Thomas Hardy. His reading of this (very) sad book is superb: well-paced, resonant, and brimming with voices. He even manages to get some humor in -- not over Hardy's head or behind his back, just bringing out a quality in some of the dialogue that I totally missed when I first read this book many years ago.

Of course, this being Hardy, nothing works out the way you want for the characters you care about. His main character, Henchard -- the Mayor of the title (or one of them, at any rate) -- is a morally complex man, someone who really wants to do the right thing but is often overtaken by his own passions, coincidence, or bad luck. (At one point near the end of the story, he starts out to do something really nasty, then changes his mind and decides to the right thing, but by sheer accident the nasty thing happens anyway.)

You either like Hardy or you don't. If you like him, you'll probably like Anton Lesser's interpretation as well. I really do hope Lesser takes on a few more of Hardy's books.

Hardy has weathered less well than I expected.

This was one of my favourite books as a young man,and I downloaded it expecting to relish it as I did 30 years ago.
Well,although the story still holds the attention,it seems that Hardy and I have grown older.
The portrait of English country life and morals in the early 19th century is as interesting and detailed as ever, but the plot is too predictable.
The narration is excellent,with the narrator switching easily and convincingly between male and female voices,between characters with rustic,rural accents and those with more sophisticated speech.
I still intend to download more of Hardys' books,they are after all,classics.

At first I thought it was slow. But then, I got used to the language and the beautiful way Alton Lister brought the characters to life.

This narrator had excellent variation in the number of voices performed. Additionally, he conveyed much of the emotion of the characters, something unusual in an audio book.

Thomas Hardy is a favorite of mine, and this narration did the work full justice

Okay, Hardy #2 down, another lovely idyll of beautiful writing and narration. As with Far From the Madding Crowd, this book kept me engaged and engrossed, sort of floating along on the lyrical writing, the interesting plot, and Anton Lesser's narration. This is the portrait of a deeply flawed man, an inherently selfish and boorish businessman and politician (can you say Republican field 2016? There are parallels) who is not without his redemptive qualities. I enjoyed it tremendously. Lesser's narration is marvelous . . . as with the works of Dickens, there is an embarrassment of narrative riches, but you certainly can't go wrong with this one. With the "get the narration for $2.99 when you buy the Kindle book" deal, and the Kindle book costs 99 cents, there really is no excuse for not giving it a try!

What made the experience of listening to Hardy: The Mayor of Casterbridge the most enjoyable?

The reader was excellent. And the story was tight and true to his development of the characters.

What was one of the most memorable moments of Hardy: The Mayor of Casterbridge?

Excellent depiction of each character.

Henchard's inevitable return to his beginning.

Hardy is not optimistic about human nature or life but quite realistic. So much of his depiction of us human beings still rings true--a classic.

A very well-narrated version of a compelling classic about a tragically flawed man who turns out to be his own worst enemy at every turn.

In reading Hardy you don’t expect Hollywood endings. What you can expect—-and get here are moving portraits of complex flaws protagonists. Well done.

This is a beautiful audiobook. Wonderful characterizations. Accents superb. I highly recommend this version in audiobooks.

I studied this novel in school 45 years ago. Although I remembered the basic story and some details, the novel and the writing is so rich that I could have been reading it for the first time. The story is excruciatingly tragic, and possibly Hardy could be criticized here, as in some of his other novels, for a certain amount of gratuitous sadness. Even so, it's one of the great novels of the 19th century. The narrator, Aton Lesser, is, as always, superb.

This 19th century novel is based on the very peculiar premise of a man selling his wife and daughter to a stranger for five guineas. Though this was probably as preposterous when the novel was written as it is now, the result is surprisingly coherent and pertinent.
Indeed, though somewhat predictable, the plot is well conceived with no loose ends left in the end. Clearly, unlike so many of say Dickens’ novels, this work was carefully constructed from the start.

The changing relations between characters as their relative status evolves are the true theme of this work. This strikes a bell with respect to our own times not only because of changing family relations through divorce and remarriage but also of promotions, demotions and restructuring in the workplace.

Overall, this enjoyable work is warmly recommended to all.