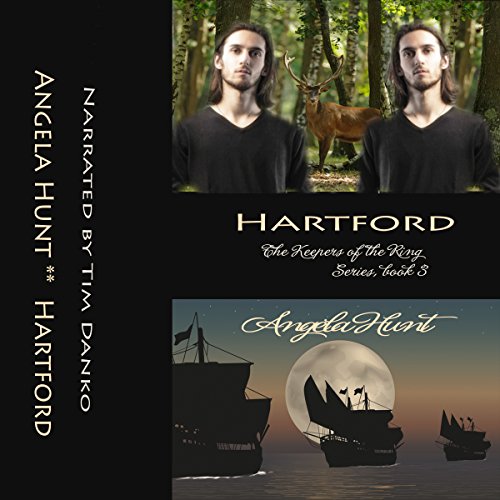 Daniel hated his brother. He knew it was wrong; knew his parents would be grieved if they discovered what was in his heart. But he had his fill of living in Taregan's shadow… Taregan the bold, the athletic, the courageous. How Daniel despised him! His only hope was to somehow escape Taregan and the life he'd always known. Then British soldiers arrive, bringing with them the perfect opportunity, which Daniel accepts… never dreaming his choices will lead them all into danger, betrayal, and the greatest trial they have ever faced. The adventures of Gilda, Fallon, and their children continue as the keepers of the ring.

What listeners say about Hartford

The story was good, but the narrating was terrible. He tried to do different voices and such, but it was just a bomb all the way across the board.

I don't think I could have gotten through this if I had not seen the review that suggested ramping the speed up on the narrator to 1.25. After that it became tolerable and I was able to get into the story. The narrator was not right for this book.

I really enjoyed this book. I have enjoyed all of her books that I have read so far.

Exciting story if you can endure the reader

Unfortunately, as others have said, the reading is very stilted and unnatural and can ruin the experience. But if you're patient and really want to hear a great story, then speed it up to 1.25 and it will be worth it.

The story line was good

I wish this series had been read by one narrator. It's hard to have the characters voices change with each new book.

I have enjoyed the other two books, then came this one. The Narrator is awful. If there wasn't a book 4 with a different narrator I would have given up on the book, but I stuck with it till the end so I would know what was happening with the story.

Good story, but the narrator is sub par, especially compared to the two who read the first two books. I could barely finish it save the story itself. Should be redone by someone who can handle emotion, gender voices, and pronunciation.

good book but not so good reader

the book is captivating and the characters go through many trials but in the end love conquers all.

The narrator has a clear, pleasant voice, however, his narrating style is slow and awkward, almost as though he is reading to a child. I found it hard to enjoy the story because of the pace and style of the narration. Even when I increase the narration speed, it did not help with the flow. The precious narrators for books in this series did a much better job, in my opinion.