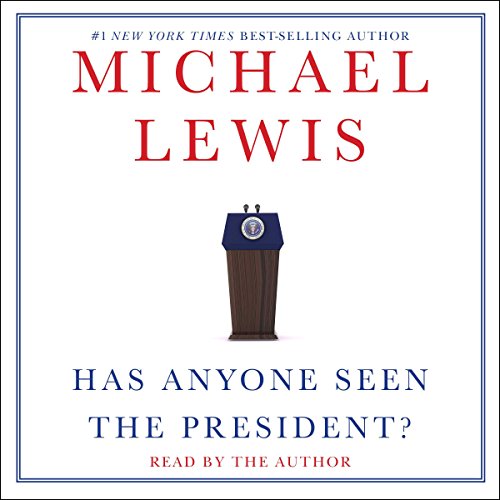 Has Anyone Seen the President?

Who better to shine a light into the shadows of the nation's capital in the age of Trump than the best-selling author of Liar's Poker and The Big Short?

In this audio investigation - unavailable in book form - Lewis narrates his 2018 report from Washington originally published in Bloomberg View. From inside the White House press room - which Lewis describes as having "the cramped, uncared-for feel of a public toilet" - to a balcony overlooking "a sea of white people" in the Trump International Hotel, to Steve Bannon's Capitol Hill townhouse, where he joins the former campaign CEO to watch the State of the Union address, Lewis takes listeners on an unforgettable behind-the-scenes tour.

What listeners say about Has Anyone Seen the President?

good story, not as captivating as most Lewis books

it's a good story and insight of the white House, Micheal Lewis has a great talent of explaining complicated topics in a simple way the average person can understand

This is a new format, and I like it. Instead of reading a 5000 word article I can listen to it. Was that worth $3? Yes. Not worth a full credit on audible so just buy it outright.

Interesting... not sure where he was going with this or why posted, was an intresting account of the green room at the white house.

Just send me anything this guy writes. I'm always disappointed when they end. I think he could make anything interesting.

Not to be confused with his books this is a straightforward reading of an article he published. There is one story being told in a linear fashion. If you know and like Michael Lewis's work he has published in magazines you will probably like this too.

An American Crisis in the White House

Sadly more of what we already know, the American Citizens are being manipulated against themselves.

Brief story of Steve Bannon and the President

Brief but interesting story of the President, Steve Bannon and the state of the union speech. Good and worthwhile story

I typically like reading the books of Michael Lewis. But this was just mindless ramble of almost an hour with no substance or point. Sad!

Sad, depressing, but insightful as always by Lewis

This insightful work by Lewis runs just under one hour, it is both entertaining and informative and the hour flies by. As for the state of the presidency, that is another story. The picture Lewis paints is sad and depressing.

an uninteresting book with no thought provoking revelations or discoveries. read the 5th risk intead

Would love more Michael Lewis in this short, magazine-like form, in addition to his books!