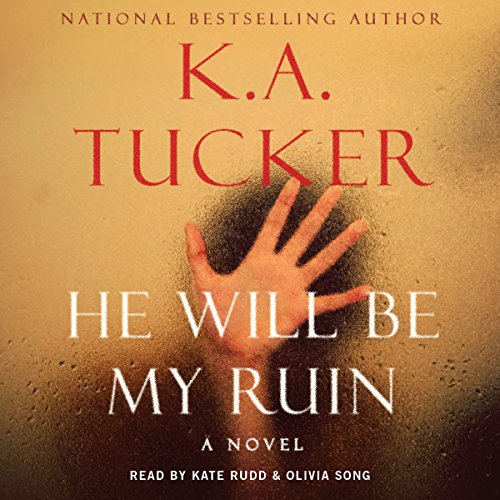 He Will Be My Ruin

The USA Today best-selling author of the Ten Tiny Breaths and Burying Water series makes her romantic thriller debut with this heartpounding story of a young woman determined to find justice after her best friend's death, a story pulsing with the "intense, hot, emotional" (Colleen Hoover) writing that exhilarates her legions of fans.

Twenty-eight-year-old Maggie Sparkes arrives in New York City to pack up what's left of her best friend's belongings after a suicide that has left everyone stunned. The police have deemed the evidence conclusive: Celine got into bed, downed a bottle of Xanax and a handle of Maker's Mark, and never woke up.

But when Maggie discovers secrets in the childhood lockbox hidden in Celine's apartment, she begins asking questions. Questions about the man Celine fell in love with. The man she never told anyone about, not even Maggie. The man Celine herself claimed would be her ruin.

On the hunt for answers that will force the police to reopen the case, Maggie uncovers more than she bargained for about Celine's private life - and inadvertently puts herself on the radar of a killer who will stop at nothing to keep his crimes undiscovered.

What listeners say about He Will Be My Ruin

This author is why I am going back to catch up on my old favorite authors and read more books by her.
This was my first book by KA Tucker. I appreciated her style of writing; she spun an interesting tale with interesting characters and sub characters. Celine has died. Speculation is that it was an apparent suicide/ accidental death. Her friend Maggie has returned from overseas to pack up Celine’s apartment. While packing away her friend's personal items, she finds diaries that disclose a side of Celine that Maggie had no idea existed. Maggie’s findings cause her hire a private investigator. Her only clue continues to haunt Maggie ... "he will be the ruin of me." As the story unfolds, Maggie begins to believe that he may also be the ruin of her as well. You will need to read it to find out if he does.
I read this book on Audible narrated by: Kate Rudd and Olivia Song. I ordered the Kindle edition for $1.99 and the Audible for a reduced price. I was so glad that I have both media as I couldn't put the book down. Being able to plug in while driving or walking made me very happy.
I wouldn’t say it was the best book I ever read, but it is in the top 25, was a fun read, and a good mystery. Kept me guessing and for once I got an ending I did not expect. I am sure that I will read this one again in a year or so when I have forgotten the details.
http://www.audible.com/…/He-Will-Be-My-Ruin-Audi…/B019HMSYQS

KA Tucker kept me guessing until the end

I am really impressed! KA Tucker just slipped into another genre without losing her trademark storytelling or the angst. I will admit that I came in expecting a romance, but the love was that of a friend. This sisterly love was just as powerful and it was just as deep so the story really resonated with me. The author weaved the story in dual POV with Maggie being the present voice and Celine being the past. The narrators were very easy to follow, so I never had difficulty knowing who was leading the dialogue.

Maggie Sparkes came to New York City to settle her best friend Celine Gonzalez’s estate after Celine’s body was discovered in what the police ruled a suicide. As Maggie walked through what she supposes were Celine’s last couple of weeks, things didn’t add up. Coupled with the discovery of Celine’s diary, and a plane ticket for Celine to visit her mother in a few days, Maggie believed that what she had was a murdered friend. When the police brushed her off, Maggie set out on her own to find evidence to support her suspicions that Celine’s death was staged to look like a suicide.

This book definitely kept me guessing as to what was going on. I think I suspected almost everyone in the book except Celine’s own mother and the PI firm. The author peeled away layer after layer of carefully laid foundation exposing Celine’s life as the 28 year old had fallen prey to trappings of a certain lifestyle. The writing was suspenseful, mysterious, and fascinating. The characters, the protagonist and the antagonist, were multifaceted. At certain point, I was exasperated with Maggie’s decision making, and the other times I was impressed with her tenacity and loyalty. Similar Celine evoked both sympathy and frustration. There definitely was some resentment and jealous issues at play, but there was still love underneath it all.

Many times I thought I had the mystery figured out, only to realize I fell for a red herring. It wasn’t until the very end that things became clear. This is a book a reader will want to finish in one sitting because it’s that engrossing. I don’t know if the ending was a shocker, but I didn’t conclusively put it together until the end. While I prefer KA Tucker’s romance novels, this one was a good mystery and suspense novel. The author took time and delivered a great plot with conspicuous characters. This was an enjoyable read.

Kept my attention but def. not great literature

The story was entertaining enough and kept my attention, but there were definitely moments where I rolled my eyes. The Celine character was especially irritating and acted stupid often enough that fast forwarded through her boots a couple times. The narrator doing Maggie was fine, but the the narrator doing Celine had A TERRIBLE male voice. Her attempt at a British accent was beyond the pale, making him since middle Eastern and was extremely difficult to listen to. The character of Ruby made the whole novel with it though and she needs her own book!

Suspense, Mystery & "Romance" all in one!

I was in the mood for something different from my normal reads and a friend recommended this book and it ended up being EXACTLY what I was looking for. This story line keeps you guessing and changing your mind about who is good and who isn't. The characters were all so real, some I loved, some I wanted to trust so much and some that I loved to hate! Loved the ending so much too!
This audiobook is action packed with lots of suspense, some mystery, sex and great narration! I want more like this!!

This book was absolutely amazing and had me going to the very end. Perfect

This book wasn’t worth the money I spent. The lead character was very narcissistic— wanted to figure out the mystery “just to be right”. She did have some level of compassion for her friend but this book had a lot of things that just didn’t make sense. Especially the two men... I think the concept was great but the execution on it didn’t work.

I couldn't pry myself away from my headphones with this enthralling story! I've read many of K.A. Tucker's before and this is my favorite to date. I am really hoping we might see a sequel to continue Maggie's story.

Loved it except for one big thing

For me this was an awesome story. Full of suspense and mystery and just the right amount of steaminess, this had a lot of dimensions and subplots to it that were all related to the main mystery enough to keep me guessing, keep me hooked and wanting to read more.

However.......I really, really did not like the main protagonist (Maggie). She was just very judgmental and sheltered (for someone who had traveled around the world, she was extremely naive and I feel like there's no excuse for it when someone has the means she has), I just got this sense of a holier-than-thou mentality from her. She has some moments of clarity where she starts to see things from Selene's perspective, but it wasn't enough for me. I just got really frustrated with her and it made me not want to keep listening sometimes.

Mixed Reviews For a Reason

this was the best book ever holy moly I couldn't stop listening. read this book! highly recommend