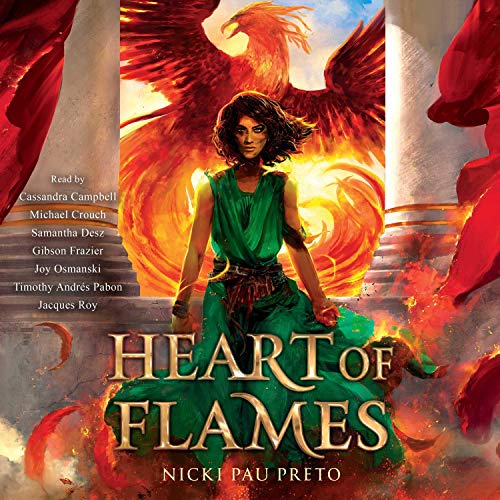 Veronyka, Tristan, and Sev must stop the advancing empire from destroying the Phoenix Riders in this fiery sequel to Crown of Feathers, which number one New York Times best-selling author Kendare Blake calls "absolutely unforgettable!"

You are a daughter of queens.

The world is balanced on the edge of a knife, and war is almost certain between the empire and the Phoenix Riders.

Like Nefyra before you, your life will be a trial by fire.

Veronyka finally got her wish to join the Riders, but while she’s supposed to be in training, all she really wants to do is fly out to defend the villages of Pyra from the advancing empire. Tristan has been promoted to Master Rider, but he has very different ideas about the best way to protect their people than his father, the commander. Sev has been sent to spy on the empire, but maintaining his cover may force him to fight on the wrong side of the war. And Veronyka’s sister, Val, is determined to regain the empire she lost - even if it means inciting the war herself.

Such is your inheritance. A name. A legacy. An empire in ruin.

As tensions reach a boiling point, the characters all find themselves drawn together into a fight that will shape the course of the empire - and determine the future of the Phoenix Riders. Each must decide how far they’re willing to go - and what they’re willing to lose in the process.

I pray you are able to pass through the flames.

What listeners say about Heart of Flames

Typically I do not like multiple narrators. It was hard here when one narrator pronounced a word one way and the next another. Other than that this was a good listen. I enjoyed it even more than book 2..

If you’re looking for the main character to finally become strong and confident you’ll be sorely disappointed. Veronica is still very gullible and naïve when it comes to her sister. The story drags until the end when it finally gets interesting. At times I became very confused when they would pause the story to give the history and names of ancient phoenix riders.

Great performances, truly was a super listen. This book was a great story, but I hope there is more to come.

It hooked me from the beginning. Outstanding narrators and fantastic storyline. I loved it more than the first.

This book was AMAZING! I can’t handle how amazing this author is. And I love the cast of narrators. I am eagerly awaiting the next book!!

I loved this so much I bought the trilogy for my Mother for Christmas. Fantastic story. Original ideas. Lots of twists and turns. Lots of action. The narration is excellent! Highly recommended!

Just As Good As the First

I actually enjoyed the second book more. More questions were answered. And we got more passages from Val which I really enjoyed.

2nd book in the heart of flames series was even better than the first. It wraps you into so many different story lines, and makes you care about each of them. The turns and surprises happened at just the right points, never seeming forced. Can’t wait to listen to the next installment.

kade's voice actor pronounces things weird and it's annoying; as new character perspective that's added so far into the story, he should at least be consistent with the rest of the actors.