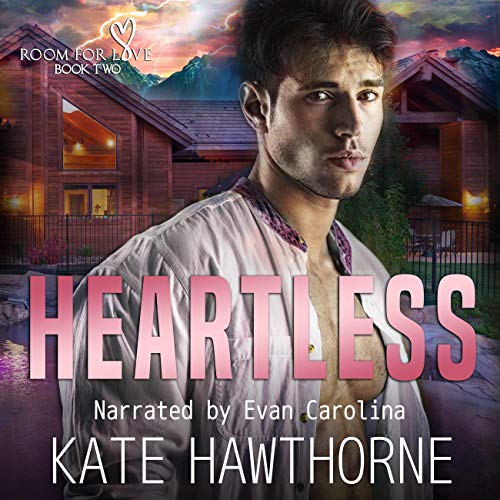 Written by: Kate Hawthorne
Narrated by: Evan Carolina
Try for $0.00

For James Motel and Levi Kadish, it's hate at first sight.

Levi thinks James is an arrogant out-of-towner, and James thinks Levi is a smug local with an overblown opinion of himself. Together, the two of them are like oil and water, but Levi likes the way he feels when James looks at him, and James really loves the sound of Levi's voice when he says....

When he says those heartless things.

In the middle of a baking lesson James never wanted, the unresolved tension between Levi and him boils over, and James is left with more than rug burn. Levi's words are emblazoned in his heart, and he's eager for more.

Levi has never had something feel as right as his unconventional relationship with James, and when he finds himself with nowhere to go, he turns to the one man he knows who won't turn him away...even though he's the only man who should.

Heartless is Book 2 in the Room for Love series. It is a 67,000 word romance that explores an unexpected love, harsh words, soft hands, and some fun in the shower. Heartless has EVERYTHING you would expect from a Kate Hawthorne book...and more.

What listeners say about Heartless

This was one of the best audios I’ve listened to a while! If I could give it more than 5 stars, I seriously would! Loved Levi and James so much! Their snark and banter was fantastic! Evan Carolina did a fantastic job with the narration!!

Enemies to lovers at its finest!

Levi and James were everything I didn't know I needed. I'm a huge fan of enemies-to-lovers books, so the aggressive tension between these two hit all the right notes for me. If you haven't read Book 1 of this series, I highly recommend you do so first because there are some spoilers for it in this one (also because it's just an amazing book).

When Levi and James met for the first time, I could practically see daggers shooting out of their eyeballs towards each other. Their banter was snarky and snippy and I loved it. Evan Carolina did a fantastic job depicting both men--I seriously could not get enough of Levi's sarcastic drawl and James's indignant fury. Much to Levi and James's dismay, their mutual dislike wasn't enough to stop the intense physical attraction they had for each other. I didn't realize how thrilling it would be to listen to all that hatred turn into intense, messy, erotic sex, but oh my god was that first encounter incredible. Levi's cruel words, the way James softened under the humiliation, and the rough passion were overwhelming in the best way. I honestly didn't expect their encounter to be anything more than a one-off, but I was intrigued to see their relationship evolve over the course of the book. What seemed like pure, unadulterated hatred started to give way into something new and unexpected. Levi's compulsion to make sure James was okay at the clinic; James in a near panic to rush over and apologize to Levi; Levi cooking comfort food for James after a hard day... As much as I loved their snippy banter, these little moments snuck under my skin and made me fall in love without even realizing it.

When things did start to get serious between James and Levi, I was sad to see everything start falling apart. James struggled so much to accept the things he liked in bed, and even after Levi accepted that he wanted James he had his own family issues to deal with. Their journey was full of ups and downs, stops and starts, and there were a few moments when I genuinely doubted they could find a way to be together. The Levi and James at the end of this story were so different from the men in those first pages, and I was thrilled to see them grow together instead of apart.

**I voluntarily listened to a free copy of this book. This review expresses my honest thoughts and opinions.

If I could go back in time and listen to this again, I totally would. This series is my favourite of Kate’s and the way that Evan narrates it really brings the characters to life and helps visualize them a bit more. The different voices really help in distinguishing who’s talking and the pace was perfect. Amazing book, amazing narration, 5 stars.

I have to admit that Levi and James were never a favorite of mine because it was hard to understand their type of love but after listening to it and being able to hear the affection and love and tone of voice thru Evan that Kate wanted these guys to express, it really made a difference in how I viewed them. I love audio books for that very reason. Levi and James came to life in a way I could better understand thru Evan's storytelling and he did an amazing job at it.

I’ve read the series before and this is by far my favorite couple. A complex hate to love relationship with a couple interesting kinks thrown in. Really enjoyed the narrator as well.

Such a good listen!

Such a great listen. Evan narrates the story so deliciously. Kates Motel boys are so fun to read/listen too. I can’t wait to listen to more of them in the future. This book was full of exploration into James and his preferences. Levi is trying to figure out his life and finds common ground with James.