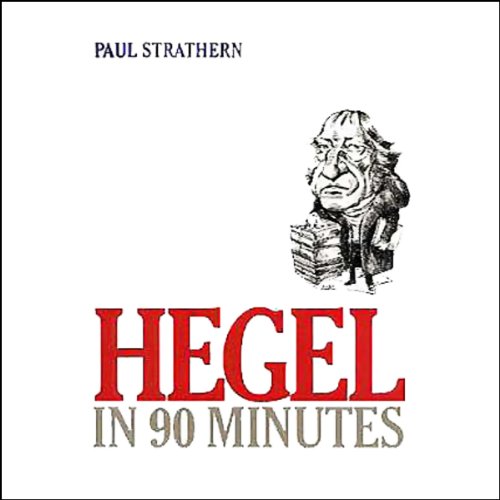 With Hegel, philosophy became very difficult indeed. His dialectical method produced the most grandiose metaphysical system known to man. Even Hegel conceded that "only one man understands me, and even he does not." Hegel's system included absolutely everything, but its most vital element was the dialectic of the thesis, antithesis, and synthesis. This method sprang from Hegel's ambition to overcome the deficiencies of logic and ascended toward mind as the ultimate reality. His view of history as a process of humanity's self-realization ultimately inspired Marx to synthesize his philosophy of dialectical materialism.

In Hegel in 90 Minutes, Paul Strathern offers a concise, expert account of Hegel's life and ideas and explains their influence on man's struggle to understand his existence in the world. The book also includes selections from Hegel's work, a brief list of suggested readings for those who wish to delve deeper, and chronologies that place Hegel within his own age and in the broader scheme of philosophy.

"Well-written, clear, and informed, they have a breezy wit about them. I find them hard to stop reading." (The New York Times)

The author of this book I think does not take the time to carefully examine Hegel's contributions and to grasp his influence. He concentrates instead on criticizing Hegel, to the point where one wonders whether the author's intent is really to help the reader understand Hegel or just to see how cleverly he can insult him. For example, he spends rather a lot of attention for such a short book on Hegel's affair with his landlady - why?

I like a good poke at a pompous figure, and I have no special love for Hegel, but when I buy a book like this I hope for some insights even in the midst of criticism, and I expect the author to help me gain some clarity on the subject. Instead I got a crude body slam.

A body slam is too much effort

This is more like a slap in the face. The writer is more interested in pulling off the cynical tone that Fitzgerald criticizes in This Side of Paradise. How useful is this review if you haven't read Fitzgerald? About as useful as this book is to illuminating Hegel if you haven't read Hegel. Stay away.

What would have made Hegel in 90 Minutes better?

What could Paul Strathern have done to make this a more enjoyable book for you?

Have some genuine interest in the subject matter.

If you could play editor, what scene or scenes would you have cut from Hegel in 90 Minutes?

Don't waste your money. If you are interested to understand Hegel this work IS NOT going to help at all.

What disappointed you about Hegel in 90 Minutes?

I was hoping for something more straightforward and less opinionated, with more content and less skewed commentary. The author clearly has personal opinions about Hegel that obscure and color the text, and not many of Hegel's actual ideas are presented.

Would you ever listen to anything by Paul Strathern again?

The Philosophy of Port

Take a bottle of port, the feast of St. Stephen and the gaze of your giant gray cat and you have the fertile ground for 90 minutes of pure joy. Hegel in the words of Paul Strathern is hilarious. Add that to the voice of Robert Whitfield and you have intelligent entertainment. After a day of opening presents and wondering if any of your children will visit you, which one does, you can sit and listen to Hegel in 90 minutes. Listen to concepts of rationalism and State, forms of "ality," nationality, minimality, commonality, finality, and the like, as part of the mind. As long as you have a mind and a State, all things can make sense, hopefully.

If you could sum up Hegel in 90 Minutes in three words, what would they be?
aka Cliff Notes

Would you recommend Nietzsche in 90 Minutes to your friends? Why or why not?
Yes - I've listened to each book in the series about a major philosopher that is available on Audible. Strathern's books don't have the analytical depth found in Will Durant's "The Story of Philosophy" books, but he does a good job summarizing each philosopher's biography, major philosophical points, and criticisms. Additionally, Strathern's breadth is broader than Durant's in that he covers a greater number of philosophers. I believe that the time spent listening to these books has been well-spent.

My reviews for each book in the series about a philosopher are identical.

What about Robert Whitfield’s performance did you like?
Voice is clear, well-modulated, and easily understood, even at 1 1/2 speed.