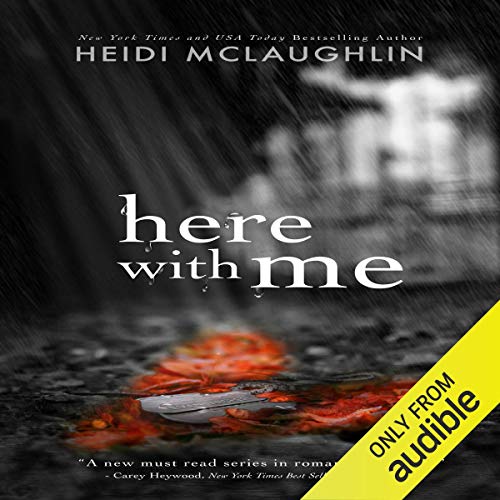 Ryley Clarke has grown up with the military in her blood, with both parents serving their country. Ryley knows the risks of being married to the military. But when the unthinkable happens, and her future husband is killed in action, Ryley can barely survive... until Evan's twin brother, Nate, helps her pick up the pieces.

After serving on a special mission with the military for six years, Evan Archer returns home to find the unthinkable: the love of his life, Ryley Clarke, engaged to his brother, Nate. With Nate on deployment, Evan needs to figure out what happened in his absence, and more importantly, how to win Ryley back from the man he once considered his best friend, but now thinks of as his rival.

What listeners say about Here with Me

My husband and I love this story.

Here With Me is a contemporary romance book told from Evan and Ryley’s POV. It is the first book in The Archer Brothers series. This was my first audio-book. My husband and I listened to this book together one day when I was sick. This was my husband’s first romance book.

I loved how the story was told. You got past flashback told as a story to someone. It made me feel as if I was having a conversation with the characters. The emotions of Ryley and Evan felt very authentic. I enjoyed the rediscovery of their relationship. My husband said he didn’t like the story because it made him “feel.” I told him that it was awesome because it gave you all the feels. The story had humor and made both of us chuckle out loud. My husband became addicted to the story. I wasn’t allowed to listen without him.

The book ends with a cliffhanger and a HUGE book hangover. My husband ordered the book as soon as the audio-book finished.

**My husband is making me type this: Glocks do not have a true safety as described in this book.

Charmingly suspenseful, with characters I could relate to. A well-written story worth anyone's time. Wonderfully narrated, and highly recommended!

ok. I'm completely annoyed by this book. It wasn't "bad" but it was a little slow & basically a back drop to the next book. I have no choice but to get the next one now! I've decided I don't love Ryley. she's in a bad situation and I would probably unfortunately act just as she does but for some reason i just wanted to smack her at every turn. But here I go into the next book...

The plot is great it just goes no where. I mean I get there will be a book 2 but really. I feel like I just read a prologue with so feelings thrown in for good measure. Not sure I will read book 2....

Awesome book to listen to. Angel Clark and Kirk Harnack both do an exception job narrating and there are many twists to keep listeners engaged

The story is good but it is really slow to start out. Once it got going it had me hooked and now I am looking forward to book 2.

Crazy military suspense serves as the back drop to a heart-wrenching love story. Such a well-written story. Solid dual narration, though the male was a bit breathy. Note: you will need to read book two to complete the story.

Male narrator needs to have a tall glass of water.

Too much mouth sounds. I could not concentrate on the story. I don't understand why this was published with such poor sound quality.

Would you be willing to try another one of Angel Clark and Kirk Harnack ’s performances?

There is such anticipation of each chapter. Love this book.
The story line keeps you glued to the book,

I wasn't too fond of this story. Not sure if it was because I couldn't connect to the characters or if I just didn't enjoy how the narrators read the story.