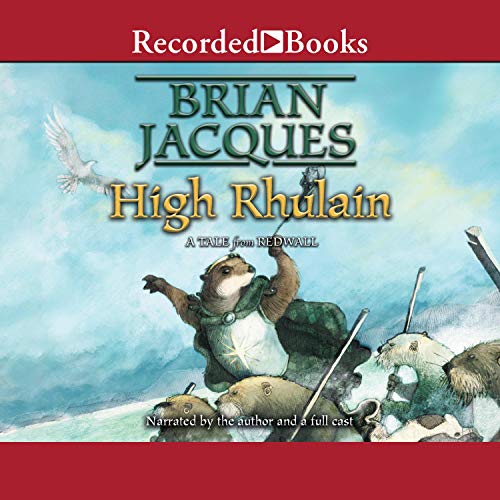 The otters of Green Isle have long been enslaved to the Wildcat Riggu Felis and his catguards, who torture the otters at every opportunity. The otters trudge on, waiting for the day their savior will arrive, the prophesized High Rhulain, who will lead them in battle and a return to glory. Meanwhile, young Tiria Wildlough, an ottermaid at Redwall Abbey, pines for her chance to learn the ways of the warrior, much against the wishes of her father. But when an injured osprey arrives at the Abbey, seeking help for its wounds and carrying tales of an embattled clan of otters, young Tiria knows what she must do.
©2005 The Redwall La Dita Co., Ltd. (P)2005 Recorded Books, LLC
Science Fiction & Fantasy
Show more Show less

"There is sacrifice, death, and bloody battles galore. Readers familiar with the series will relish returning to the Abbey." (School Library Journal)

What listeners say about High Rhulain

A stable book in a great series.

Yes. I would recommend this book due to the fact that while not the best Redwall book, it show cases the best traits of the series. The story moves along well, the characters are engaging and the villains are a well written bunch.

What was one of the most memorable moments of High Rhulain?

The moments are not nearly as important as the choices of Atunra and Riggu Felis. Well chosen and delightful to listen too.

What does Brian Jacques and Full Cast bring to the story that you wouldn’t experience if you just read the book?

Aside from the well played songs of the book, it gives the characters a new life due to the characters, making the world seem more realistic.

Not particularly, though listening to the villains bickering was always fun.

The biggest flaw of the book comes about as the sense of danger is minor. It is a very middle of the road book, and one of the few with an otter main character (as well as the only female otter main character). So it is not the best, but far from the worst.

Not in the same class as his first novels. Redwall was really very good. This novel did not add much to the series. A case of an author putting out books on a schedule rather than as a work of art.

I LOVE THIS BOOK

THIS BOOK IS SOOOO GREAT! I love this book so much! Amazing book the storyline is great! I would not recommend this book to young kids because it is pretty gross at times.

One of Brian Jacques's best works

It's simply the story of a warrior princess who travels to a far off land to save her people from wretched slavery, and become the high Rhulain.

The best book ever

This was the first redwall book I read about 10 years ago. Since then I read all of the books in the redwall series and this one remains one of my favorites! Here's some of what there is to see in this book (without giving spoilers)

1. A vicious wildcat ruler wages war with a group of robin-hood-like outlaws on a secluded island, with a dangerous son plotting against him all the while

3. A warrior so mad they think they're a shrew, sea otter, hare, and badger, among other things

4. A strong female protagonist who embarks on a journey worthy of standing out as one of the best in this enitre series

5. A really good set of songs and riddles (custom in redwall books)

I have always had a deep soft spot for the Redwall books, this book is performed so nicely by the author and others who worked on it. The acting is fun and engaging and it is superb.

Whimsical and Fun to listen to, a joy for all

Narrated beautifully, this book is lighthearted and easy to listen to. I'll be listening to many more from the Redwall series!

Brian Jacques did it again!

Best redwall book so far... I love everything about this book!! Redwall is an amazing book series!