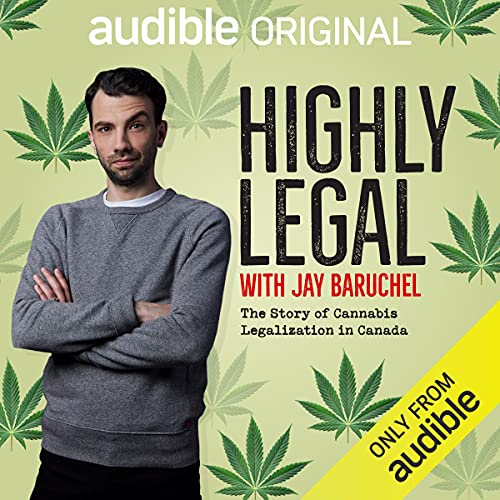 Written by: John Semley
Narrated by: Jay Baruchel
Try for $0.00

Jay Baruchel continues to cement his leading man status with many exciting projects. He currently stars in the FOX series The Moodys, alongside Denis Leary and Elizabeth Perkins. He also recently starred in the critically acclaimed FXX comedy series Man Seeking Woman, based on Simon Rich's book The Last Girlfriend on Earth and executive produced by Lorne Michaels. Jay co-wrote the hockey cult feature film Goon with Evan Goldberg and was nominated for two 2013 Canadian Screen Awards in the Best Supporting Actor category and for Adapted Screenplay. He then reprised his role in Goon: Last of the Enforcers, which he also co-wrote and in which he made his directorial debut. Other selected film credits include This Is the End, Knocked Up, She's Out of My League, Tropic Thunder, The Trotsky, The Sorcerer’s Apprentice and the Academy Award-winning Best Picture Million Dollar Baby. He also voiced the lead role of Hiccup in the DreamWorks Animation How to Train Your Dragon franchise, in which all three films grossed over $1.6 billion dollars worldwide. Most recently, Jay starred in, co-wrote, and directed the horror thriller Random Acts of Violence, starring Jesse Williams and Jordana Brewster.

What listeners say about Highly Legal

HIGHLY LEGAL gets it right!

This podcast covered it all. Excellent content! Entertaining AND informative.
Bottom line:
I can't wait for the Craft Cannabis shops to start popping up!
Closer to how it worked before 'they' mucked it up.
Toking since 1959.
As an example of ineptitude: In order to purchase a small bud I can only receive it packaged IN a wrapper, IN a box, IN a double walled PLASTIC jar(at least 50 times larger capacity than is needed), without even being able to see it, smell it, or see the condition it is in UNTIL I open all that packaging. Makes no sense and makes the regulations look stupid.

As someone who consults for, is heavily invested in, and earns income from the Canadian cannabis industry I really enjoyed this series. I think some topics and concepts are a little bit oversimplified for the sake of the audience, but generally speaking, it's really well produced, informative, and accurate and even for those like me who have lived in this space there are some new insights and information to be learned. I've only listened to five episodes, so I may come back and revisit this review, but I'm loving it so far.

This well-written series is interesting, informative and fun. Jay is the ideal narrator, and it contains lots of other speakers. Fascinating story. Highly reccomended!

I really liked it! Lost of information that I didn't know and I finished with a better understanding of legalization than when I started. Plus it was so wonderfully Canadian.

no not till 22 in age it welĺ take away your

get up and go. you will be hungry, but to la,zy to get the meal. you will want to drive and not a good driver
then you not remember where the house is nor where your wallet is. the better the smoke , the worse your mind is
.

Couldn't have had a better Host!

Loved every single episode! A chronology of weed legalization we didnt know we needed! Jay was fantastic as host to this very intriguing doc!

insightful, funny, uplifting and grounding. From content to narrative it is all Canadian. 10/10 !

well thought out and thorough with plenty of fun stories. the only bad part was the end of episode 7 as it was the end of the series and I had no more to listen too....sad face

I learned so much.

I loved this. I learned lots. This is globally relevant. It's also delivered well and fun to listening to...which I usually did a little high. I am late to the game as someone who hadn't tried weed until it was legal. This series had so much great information.

Missing a part of the story!

Great podcast! I'm a fellow cultivator with Anchor Cannabis and listening to this gave me extreme anxiety as I relived the trauma of legalization... Unfortunately the section on corporate sabotage against small business was missed-although it may need it's own podcast! The only thing applying got us was a government record on the grounds of whether it was known or not, we were terrorists. After year's in the legal system it would have been far easier to not follow the rules.

Looking forward to hearing more from Jay B. Fantastic! Thoroughly enjoyed listening to this

This was a fun episode to listen to. The storytelling is really well done, and I enjoyed the narrator's approach with it. Overall a great listen, fun, and informative as well.

Sucks that this is over

This was a great podcast to listen to. It gave great information while still being entertaining!! I wish this series would continue.

it's well produced and I can identify with the content, also an informative timeline. I'll listen to more episodes an give a better review.