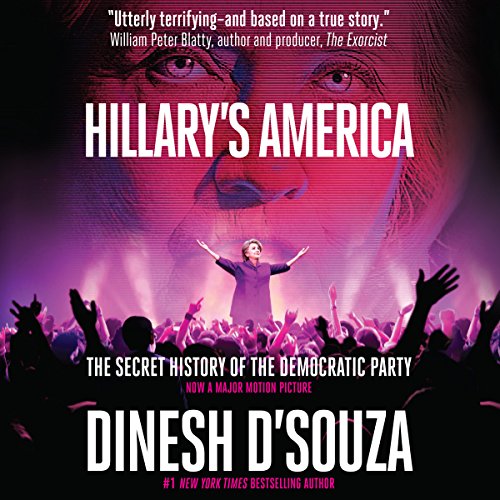 Written by: Dinesh D'Souza
Narrated by: James Foster
Try for $0.00

Dinesh D'Souza, author of the #1 New York Times bestseller America, is back with this darkly entertaining deconstruction of Hillary Clinton's flawed character and ideology. From her Alinskyite past to her hopes for America's progressive future, the presumptive Democratic nominee is revealed to be little more than a political gangster intent on controlling the nation's wealth. D'Souza chronicles the sleazy ascent of the Clintons and makes clear what some voters have long suspected: that Hillary is far more dangerous and corrupt than Bill ever was.

What listeners say about Hillary's America

Not suitable for Audible

This is a book full of right wing lies and propaganda and has no literary value whatsoever. It should not beOffered by audible. In fact it should be a reason not to subscribe to Audible it should be removed from inclusion. It’s not worth the paper it’s written on.

Really good. Very well written and spoken. I learned a lot of history and will listen again in time. Thank-you.

Wow! What a book!

Although I read/listened to this book long after the 20106 election, I found it so interesting. I was amazed at the amounts of money that the Clintons have made since leaving the White House and the things that money is connected with. I also found the history of the Democrat party very interesting. I learned so much about the Progressive Movement that I knew nothing about. Thank you Mr. D"Souza, because I know this must have been a challenging book to write and get published. I am also thankful for your recent pardon, as I can only view your conviction as based on politics. No one, in any political party, should be convicted because of his/her personal political views or for speaking out about those views.

Censorship? Who does this?

Someone decided to censor the "N" word. I don't really care, but why do that and leave in this quote attributed to Bill Clinton: "She's probably eaten more p***y than me"? Real nice to have that pop out with my daughter listening.

This book has made me realize how important history is to making informed decisions and why knowledge of the history of our government is especially critical. Dinesh has created a need with this book to learn even more.

Full of Anger and biased

I read this book to understand the history behind Hillary and the Democratic Party and because a close friend pointed me to it.

I received what I perceive as an extremely bias opinion of the Democratic Party that painted a very black vs white picture of democrats vs republicans. And we all know the world is not black and white.

This audiobook is well done and well read. the message is a message for all Americans. Worth every penny.

WOW! Detailed History with a Punch

I am a history buff, but I have never consumed so much detailed,documented enlightening history in one sitting. I have to give it to him, it was never boring.

Lots of Clinton and Democrat current & ancient history! Lots of a'hah! moments. Explains so much. Read it now before the Clintosn call for it to be burned!

Where does Hillary's America rank among all the audiobooks you’ve listened to so far?

Clearly Democrats will call this propaganda, but if it is the truth, is it really propaganda? If people would just open their eyes and minds to how demonic the history of the Democrat Party is, and how corrupt the Clinton's are, and will likely continue to be, our country would be so much better off. Sadly, in America there really is no such thing as equal and blind justice, if there were, Hillary and Bill would be spending the rest of their lives in a federal prison.

Best book I've read yet!! Loved it. ALL AMERICANS should read this!

This book was incredible!!! I have already been recommending it to everyone I know!!! Extremely informative and eye opening and never was there a boring or dull moment. Learned so much more about our history and a lot of things that was never spoke of or taught.