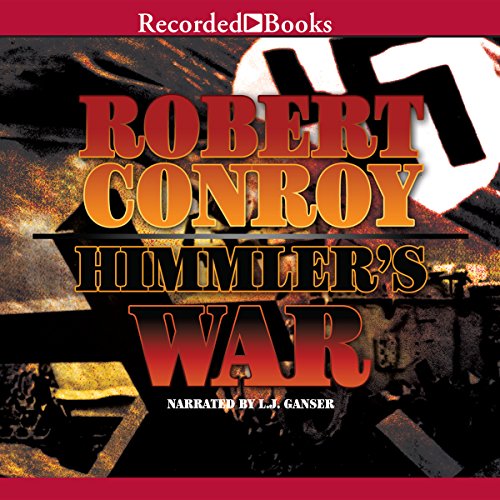 In the days after the Allies’ landing at Normandy, Adolf Hitler is removed from his position atop the Third Reich, and SS chief Heinrich Himmler assumes control. Meanwhile, the Allies begin grappling with competing solutions for bringing the war to an end. But with a second wind - and a potentially devastating secret super-weapon - the German war machine is primed for a final assault.

What listeners say about Himmler's War

Well Worth A Listen

Conroy begins his story with a lost and damaged American bomber struggling to get home and dumping it's bomb load over a military installation in East Prussia. This installation is the infamous "Wolfs Lair" and Adolf Hitler is removed from the board by this accident of war shortly after D-day. Himmler seizes power with the support of the German army and things begin to happen differently from the world we know.

The story developments flow smoothly from this action and most of them seem to be logically consistent. The story is well crafted and the characters are believable and sympathetic. Conroy follows Harry Turtledoves recipe of telling the story from multiple character viewpoints. The recording was seamless and the narrator, Mr. L. J. Ganser, was highly professional.

While I did have some trouble believing in a Russo-German ceasefire and a Nazi bomb these, rather far fetched, developments did not interfere with my enjoyment of the book. If you enjoy alternate history tales as I do I think you will find this one well worth a listen.

What did you love best about Himmler's War?

Even though there were some plots Conroy could've gotten rid of to exspand on to other plots; the overall story made me want to listen to it even after getting to my next location.

With a more capable leader behind the reins of the Third Reich, the Second World War would have been very different indeed. Both creative and historically believable. This novel offers an interesting 'what-if', with viewpoints from both soldiers and civilians alike.

Mostly entertaining but not really interesting

The outcome is basically the same except for different and more likeble people surrendering to the Allies. The story is therefore a bit too realistic for the alternet world. The Atombomb is maybe the one thing that might have made this story interesting but the use of it did nothing for it.

Denigrates the US capabilities in Europe to make a story

Conroy’s stories are incredibly detailed, well researched and suspenseful. But this story is predicated on a denigration of US capabilities in Europe in WWII. US AirPower commanded the skies and outside of the bad weather around the Battle of the Bulge would have made most of the events in the story impossible. US AirPower would never have allowed the Rhine Wall to be built and would have made the German retreat to behind it very very costly. The repeated lack of air support is ludicrous. It makes the story difficult to enjoy.

Very good, on par with old school Tom Clancy - well worth the time and credit to listen to

Great read! i really enjoyed it.

however the narrator needs to work on pronunciations. Otherwise it was a great book and wonderful story.

hated to finish ssd h liked it a lot. I recommend it to anyone., that likes good war stories.