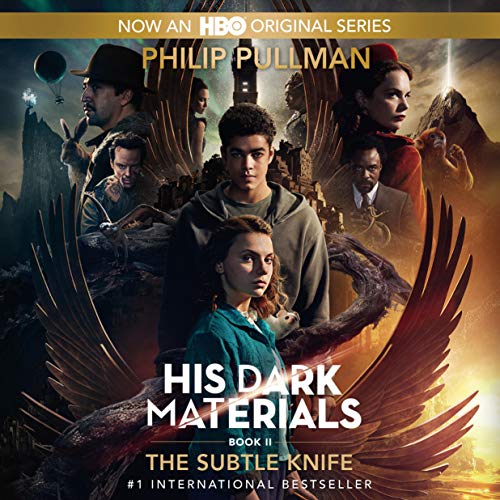 Coming soon! A new HBO series, His Dark Materials, based on Pullman’s books.

The spellbinding sequel to The Golden Compass, the modern fantasy classic that Entertainment Weekly named an "All-Time Greatest Novel" and Newsweek hailed as a "Top 100 Book of All Time", continues the epic adventure, catapulting listeners between worlds and toward a devastating discovery.

Lost in a new world, Lyra finds Will - a boy on the run, a murderer - a worthy and welcome ally. For this is a world where soul-eating Specters stalk the streets and witches share the skies with troops of angels.

Each is searching - Lyra for the meaning of Dark Matter, Will for his missing father - but what they find instead is a deadly secret, a knife of untold power. And neither Lyra nor Will suspects how tightly their lives, their loves, their destinies are bound together...until they are split apart.

“Just as quick-moving and unputdownable as The Golden Compass.... The mysteries deepen and the wonders grow even more extravagant.” (The Washington Post)

"The superb production of this fascinating fantasy epic makes it a heart-thumping listening adventure." (AudioFile)

"More than fulfilling the promise of The Golden Compass, this second volume starts off at a heart-thumping pace and never slows down." (Publishers Weekly)

What listeners say about His Dark Materials: The Subtle Knife (Book 2)

I really enjoyed the story, and the narrators did a wonderful job.
The only downfall really was the horrendous music between chapters, at times it was quite disturbing.

It was not as good as the first one. It wasn't as exciting or suspenseful in my opinion.

love the different actors voices, makes the story more realistic. very short book. kind of disappointed by how it was separated in multiple chapters instead of the regular 15.

this story weaves a rich tapestry of fantasy and fascinating characters over an epic arc. you definitely should read this series.

loved it!!! all the different voices made this story come to life. I recommend this for those fantasy lovers.

Great except for jarring music between chapters

Love the story and the readers. But the jarring music between the chapters was unnecessary.

it's a good read and the story is amazing the proformanes can be a little shrill but it's not bad.

Philip Pullman could well be the Tolkien of Gen X . The story is a terrific adventure. The performance makes it even better. I will listen again at some point.

A very entertaining listening experience. I appreciate that the audio issues with the first book were fixed for this one. Much easier to listen to.

The second book in a fantastic trilogy!

His Dark Materials, of which this is the second book, is a terrific fantasy. While aimed at younger readers, the series holds up brilliantly for adults, as well.

In the second book, Lyra's adventure continues, as she finds herself in another world and discovers Will, a young boy who becomes her companion through the rest of the series. Lyra & Will also find other types of beings in this world, angels and witches; some are helpful, some not so. You'll enjoy taking the journey with them, and the narration -by author Philip Pullman and a full cast- helps pull you into the story.

I listen to A LOT of books on audible.com. This and Golden Compass received great ratings except for those who wrote a review. I see this often. I guess we have some literary critics who haunt audible.com. :) I found The Golden Compass and this book wonderful stories. The narration on both were great, and the music didn't bother me a bit. I'm starting the 3rd book with great expectation. If you like a well read, great stories then these books are for you.

In many parts it sounds as if someone is having a conversation in the next room, or an annoyingly repetitive chirping sound distracts you from the content.

This is the second book of the trilogy, and I thought if anything it surpassed the first with the introduction of new and compelling characters and plot developments. The actors and production are superb. Perhaps the best youth recorded book I have heard, including all of the Harry Potter books. Very highly recommended.

This book is amazing - the narriator is very good as well. I loved these books when I read them - and I loved them just as much while listening. You won't be disappointed.

The second part of the trilogy is wonderfully compelling. The musical interludes between chapters are terrible -- ear piercing interrruptions to an otherwise great dramatization.

Enjoyed as much as the first

Great second book. I love the narration in these books. Each character has it's own voice. The books really come alive.

Not as good as the first novel in the collection

The story was a bit stale. I found myself waiting for it to be over...

If you’ve listened to books by Philip Pullman before, how does this one compare?

Not as good as Golden Compas which had me on the edge of my seat!

Have you listened to any of Philip Pullman and full cast ’s other performances before? How does this one compare?

Did The Subtle Knife inspire you to do anything?

It inspired me to give up on the golden compass story

If you read the Golden Compass you have no choice but to continue this series. I wish I could say this was as an enjoyable, but I can't. I can say that it is an interesting, if not a tad confusing. In general the series walks a thin line between young-adult and adult literature. There are times I found it a tad childish, and there are moments when I can't see a child understand the complex story.

Like most trilogies, this is an in between story that mostly sets up the next and final book.

The production is first rate. 20 year of audio book listening I can say it is one of the best on that level.

I am half way through the third book and I can say that I look forward to listen to them all again which is something I seldom do.

Great book, Titles are off as is the Chapers

Also, the biggest issue is the chapters Book Chapter 1 is chapter 1 through 7 (approx. 43 minutes). This goes on with the other chapters. In the first book The Golden Compass the chapters are laid out correctly and labeled.