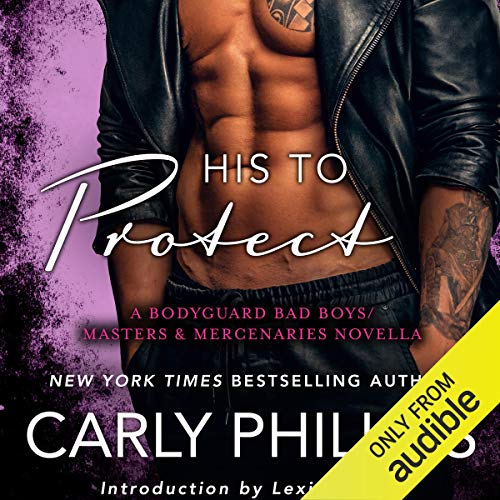 Written by: Carly Phillips
Narrated by: Sophie Eastlake
Try for $0.00

Talia Shaw has spent her adult life working as a scientist for a big pharmaceutical company. She’s focused on saving lives, not living life. When her lab is broken into and it's clear someone is after the top secret formula she’s working on, she turns to the one man she can trust. The same irresistible man she turned away years earlier because she was too young and naive to believe a sexy guy like Shane Landon could want her.

Shane Landon’s bodyguard work for McKay-Taggart is the one thing that brings him satisfaction in his life. Relationships come in second to the job. Always. Then little brainiac Talia Shaw shows up in his backyard, frightened and on the run, and his world is turned upside down. And not just because she’s found him naked in his outdoor shower, either.

With Talia's life in danger, Shane has to get her out of town and to her eccentric, hermit mentor who has the final piece of the formula she’s been working on, while keeping her safe from the men who are after her. Guarding Talia's body certainly isn't any hardship, but he never expects to fall hard and fast for his best friend’s little sister and the only woman who’s ever really gotten under his skin.

What listeners say about His to Protect

I listened to this as part of the Crossover from Masters & Mercenaries. This one kept the same excitement as the M & M series. It had great characters & hot sex scenes. Good narration. Don’t miss this one.

This was a terrific read/listen. I could not put it down. It was fast moving and the characters were interesting and had a great backstory. Talia is a scientist for a pharmaceutical company that she found a breakthrough medication that others don’t want her to have so she needs protection which brings her back to Shane, her brothers best friend and her crush from their childhood, who is a bodyguard for McKay-Tagart. When they go on the run they find out they both still have chemistry and both decide to just have what time they have together. But somehow whoever is after Talia they keep finding them. There is always something big going on in this book. There was so many twists and turns and the ending was great. Carly Phillips did not disappoint in this book. I highly recommend this read. Sophie Eastlake narration keeps you wanting more.

This novella had a lot going on and didn't have any dull moments, but I felt like it was lacking depth. I didn't feel like the characters were fleshed out well enough. As a result of the short length, it seems like the decision was made to focus on action more than the emotional aspect of the story, which might work for some people.

Had a sleepless night and needed to relax, this story was perfect. I liked the story and the characters. This was an easy, fast, almost predictable second chance even. Great if you love to love.

This contribution to the Masters and Mercenaries extended world was interesting and kept you hooked. The hero and heroine were a good match. Sophie was an excellent narrator.

One of the worst books I’ve ever read. It was painful to finish the book!!

From student tutor to Protector

When your lifestyle works is hanging in the wind and someone is trying to kill you. What do you do you call your big brother who calls his buddy. Little did you know it would be your student from high school.

Finally getting there forever

Quick romantic suspense...when Talia Shaw’s lab is destroyed and her cancer research is stolen, she goes on the run. Her brother sends her to his childhood best friend, and professional bodyguard, Shane Landon. The same Shane Landon whom Talia has crushed on since high school. Can Shane keep Talia safe while they find her reclusive mentor? Will their friendship become more?