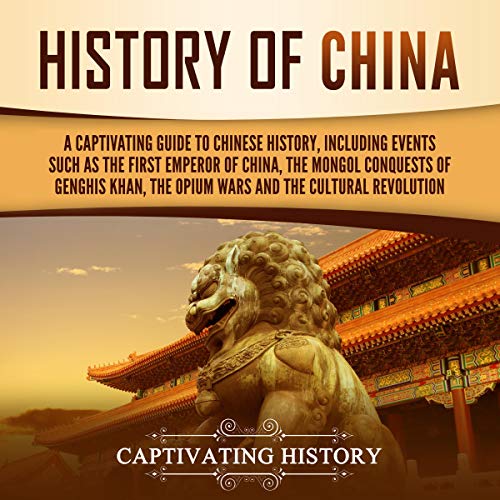 Written by: Captivating History
Narrated by: Edwin Andrews
Try for $0.00

If you want to discover the captivating history of China, then pay attention...

The history of China is complex - perhaps, more complex than that of other nations. The ethnic groups that compose China go back to prehistoric times, and each group lent its own color to the enormous nation. It is not like a diluted mixture of all its cultures; rather, it is a collage.

Yet, there are immutable elements still present today. Rice originated in China, and so did stir-frying. Anyone who has enjoyed a snack or two from a delightful swimming pool imitates the same practice in the water towns of China from times past.

Brocade and printed silk fabrics were first created in China. Iridescent porcelain is a product of the Ming dynasty. The Chinese were among the first to develop blast furnaces. They were the first to invent fireworks and gunpowder. And the list goes on and on.

As you listen to this book, you will note that history tends to repeat itself in the rise and fall of the many dynasties of China. However, you will also notice that there are clear distinctions between one era and the next.

In History of China: A Captivating Guide to Chinese History, Including Events Such as the First Emperor of China, the Mongol Conquests of Genghis Khan, the Opium Wars, and the Cultural Revolution, you will discover topics such as:

So, if you want to learn more about the history of China, scroll up and click the "buy now" button!

What listeners say about History of China

Every important name, event, or place is terribly mispronounced! So much so that they are not recognizable to what the actual names are. Makes this knowledge non-transferable.

High level details, several miss pronunciations, and a perceived sympathy to the goals of Mau-ist communism.

Pronunciation of the proper noun.

Good overall review.
The narrator pronunciation many names, people, names and events in English sounds. This was especially true for things happened over 100 ago. Would be lots better if the narrator used a native speaking Chinese’ proper sounds to narrate.

good overview of the Chinese history

The initial part is a little slow. once on gets in the middle ages, it picks up. last 200 years history is an eye opener

I'm so happy that this audiobook has definitely been made possible. It's fresh and new but because of the intense secretness of the official archives, the whole doom prospects being deleted from modern memory.

I imagine you would not recognize China except you see it from a different view which is what Captivating History offered me.

A Short History Of China, that the end tolls in China, completely its documented 4000 years of history are ........" often wavering, showing not only a contempt for human life" and with that also gives a "vast and endless supply of workers". In the end, this audiobook takes hatred and unlimited supply into focus.

Such a rich and vast history.

I am very interested in Chinese history. This audiobook provides me some of the basic information I wanted.

This audiobook is a gift for my friend who has the enthusiasm to understand Chinese history and society. When he receives this audiobook and start to listen to it, he told me that he loves it.

Well worth the time

Got away with a better judgment of the sweep of Chinese history. Many distressing parallels with modern America and our negative political infighting.