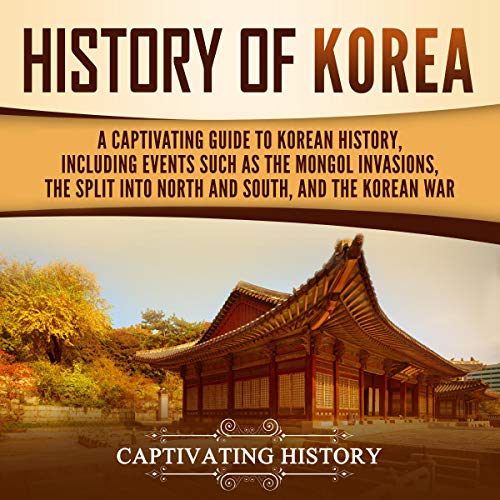 If you want to discover the captivating history of Korea, then pay attention...

The Korean Peninsula today is divided into two, but there was a time when this peninsula was divided into many states. Over the course of time, and besieged by expansive transient dynasties outside of this modest piece of land, many clans and tribes overran their lands. Of all those malicious and greedy potential overlords, none managed to prevail.

The soil is rich with the blood of the people who made Korea happen, and it is the Korean people who rose victorious among the maelstrom of dead empires led by hated tyrants and wars fought by people in lands far beyond their own. The Koreans are survivors, known for their persistence and courage.

In History of Korea: A Captivating Guide to Korean History, Including Events Such as the Mongol Invasions, the Split into North and South, and the Korean War, you will discover chapters, such as:

So, if you want to learn more about the history of Korea, scroll up and click the "buy now" button!

What listeners say about History of Korea

The information given was succinct, but I wouldn't call it "captivating". It fell like I was being read a series of encyclopedia articles.

The narration was pretty bad. Korean words/names were pronounced incorrectly and inconsistently. I counted at least three different pronunciations the narrator used for "Joseon" (a major Korean dynasty), and all three were incorrect. I don't expect native-level accuracy of Korean names, but there are accepted English approximations that the narrator seemed to not care to look up and no one in post-production checked his pronunciation. As someone who lives in Korea, it took me forever to figure out some of the cities that were being spoken about, in one case it was a city I'd lived in for a year, but the narrator's pronunciation made it unrecognizeable.

This audiobook is about the history and hidden true story of the Korean war. I fully recommend you audible this story. Yes, however in south Korea there are many struggles to delete this history by pro-Japan and pro-USA party for over 70 years.

While this was a great book and I definitely learned a lot from it, what kept me from giving it a full 5 stars was that it left me feeling unfulfilled. I would have liked to see them put more detail in to some of the chapters. Still a must listen.

Inaccurate, vague, and the few accurate statements rarely go more in depth than a Wikipedia article

I am in the process of learning Korean but I am way more interested in the culture and food. I think inorder to better grasp the culture I need to know as much about the history of Korea as possible. from this book, I've learned that Korean people, both northern and southern, are resilient and hard-working. I can't wait to learn more!

This audiobook shows much data that has helped me understand the Korean War. It gives information that is more comprehensive than any article on the subject. I would highly suggest it to anybody doing Level History or anyone involved in Asia.

This audiobook included a lot of useful information in a simple to understand format. What a lousy bunch of politicians worldwide.

An unbelievable history that was very enlightening. I’ve got 2 history standards but I’ve not been shown to the horrors of this catastrophe by our civilian & service leaders during that period in the history of our nation.

This is a necessary examination with teachings on considering global strategy for now and for the future. Here we go again: Korea, the sound of history repeating!

These decisions had results which in turn gave birth to more results that bend and change lives and decision making. A lot of the choices reflect a total lack of knowledge of the region but a powerful belief that they are "right". And hence, totally wrong.