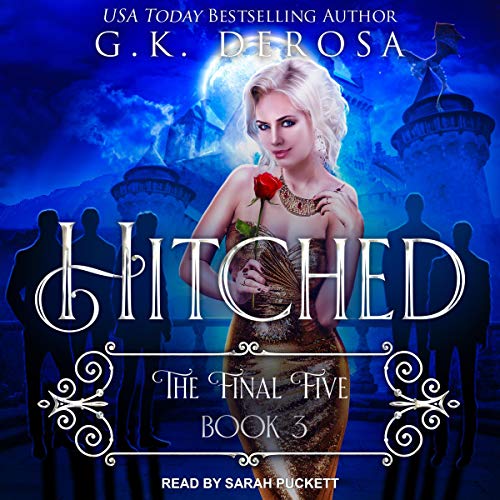 Written by: G.K. DeRosa
Narrated by: Sarah Puckett
Try for $0.00

Kimmie-Jayne thought discovering the bachelors were supernatural was tough, until she finds out she has to spend the week with their families.

Now she's whisked off to meet four of the most powerful families of Azar. If she can survive dragon lords, daunting angels, the intrigue of Fae court, and the Underworld, she'll end up with the man of her dreams. Or so she hopes.

But nothing is as it seems in each of these households, and perils loom in every corner of the vast estates. As more secrets and betrayals surge to the surface, Kimmie-Jayne can't deny that following her heart might get her killed.

Will the men she loves be able to protect her or will the supernatural world prove too much for her as she struggles to choose the final two?

What listeners say about Hitched: The Final Five

this 3rd book of the Hitched serie is very good. Only negative is that as for the other 2 books, it is way to short. The whole series could have been writen in 2 books.