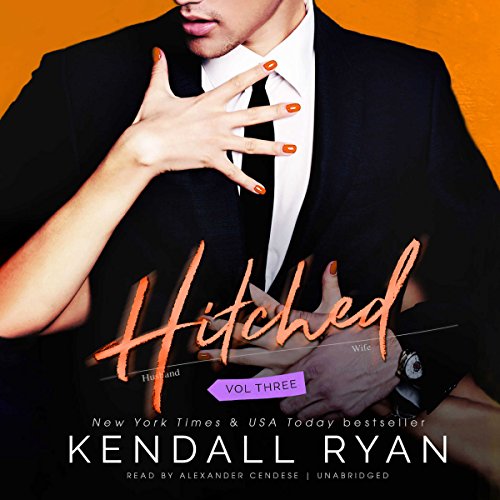 Written by: Kendall Ryan
Narrated by: Alexander Cendese
Try for $0.00

From New York Times best-selling author Kendall Ryan comes the third and final volume in the hilarious and lust-filled tale of a man determined to win over the one woman who wants nothing to do with him - his fake wife.

Marry the girl I've had a crush on my whole life. Check.

I have 90 days to knock up my brand-new fake wife. There's only one problem: she hates my guts. And in the fine print of the contract? The requirement that we produce an heir.

She can't stand to be in the same room with me and says she'll never be in my bed. But I've never backed down from a challenge, and I'm not about to start now. Mark my words, I'll have her begging for me, and it won't take 90 days.

On the heels of her smash hit and New York Times best-selling Screwed series, Kendall Ryan brings you Hitched, a romantic comedy that delivers heart and heat.

What listeners say about Hitched, Vol. 3

The narration is so bad it distracts you from the story, it was hard to finish the book. Do the people who hire him even listen to the books he narrates? I only listen to the 2 and 3 book because I have the romance package other whys I wouldn't have bothered. When I see Alexander Cendese is the narrator I know the performance is gonna be bad.

the first book was perfect with the male and female voices. then book 2 and 3 was bad with Alexander Cendese only no female voice made it very difficult in listening the books

I have never been so disappointed with a book series in my life!!! Book one was great and made me want to listen to the rest. But book 2 and 3 where not only a waist because it should have only been one long book but not having the narration done by the same in book one or at least having a female voice was just bad judgement!!! Not only did it make it hard to listen but it took away from a already bad story. Olivia's story was far fetched, annoying, and just down right unbelievable!! I get trying to write a book that is new and fresh but this is not Kendall Ryan first book and she should know by now that her fan base trust her not only for a great story but look forward to her work. I never write lengthy reviews but I hope she see this one. If this series was not included in escape I would have requested my money back! Books 2 and 3 need to be redone with a female voice added or simply make one long book. I only finished because of Noah! I wanted to see how in the hell he managed to keep his right mind and not walk away. I will still look forward to the next Kendall Ryan book but if they are anything like this one I will pass!!!

...once again great story, great ending...poor narration by Alex. I don't see how the guy gets steady work. His female voices sound mostly like Spongebob Squarepants. I say mostly because he's never consistent with it.

Narrator Destroyed this story for me.

The first book was awesome leaving me excited for the 2nd book but the narrator killed this story for me. I hoped that they changed the narrator during the third book but they didn't and he got worse I cringed everytime he did Olivia's voice. Too whiney!!

Same rough, gravely voice of narrator used for female character which was confusing. I kept thinking it was male character talking instead of female. This caused brakes in continuity of story. Please hire a narrator that can sound like a female next time. Otherwise the story was good but difficult to follow.

What happened to original narrators?

The narrator was terrible, not suited for this story. Should have kept the narrators from the first volume.

It was hard to distinguish between the male and female. Wish there was a female sounding voice.

This actor is the wrong guy for the narration on this book. I could see him reading a gritty PI novel.