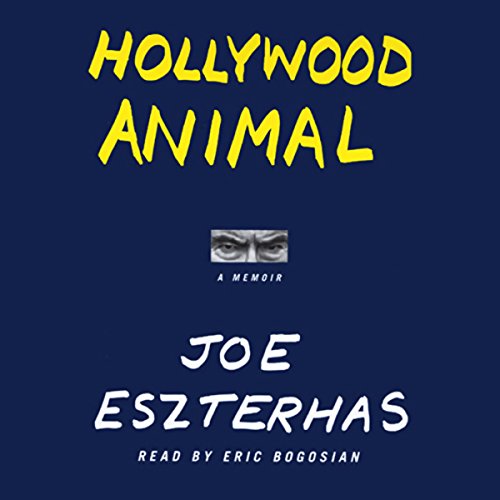 He spent his earliest years in post WWII refugee camps. He came to America and grew up in Cleveland, stealing cars, rolling drunks, battling priests, nearly going to jail. He became the screenwriter of the worldwide hits Basic Instinct, Jagged Edge, and Flashdance. He also wrote the legendary disasters Showgirls and Jade. The rebellion never ended, even as his films went on to gross more than a billion dollars at the box office and he became the most famous, or infamous, screenwriter in Hollywood. Controversial, fearless, extremely talented, and totally unpredictable, Joe Eszterhas has surprised us yet again: he has written a memoir like no other.

On one level, Hollywood Animal is a shocking and often devastating look inside the movie business. It intimately explores the concept of fame and gives us a never-before-seen look at the famous. Eszterhas reveals the fights, the deals, the extortions, the backstabbing, and the sex, drugs, and rock'n'roll world that is Hollywood. But there are many more levels to this extraordinary work. It is the story of a street kid who survives a life filled with obstacles and pain...a chronicle of a love affair that is sensual, glorious, and unending...an excruciatingly detailed look at a man facing down the greatest enemy he's ever fought: the cancer inside him...and perhaps most important, Hollywood Animal is the heartbreaking story of a father and son that defines the concepts of love and betrayal.

This is a book that will shock you and make you laugh, anger you and move you to tears. It is pure Joe Eszterhas: a raw, spine-chilling celebration of the human spirit.

"The story about Mr. Eszterhas and his father, buried at the heart of Hollywood Animal, is a powerful and affecting one." (The New York Times)

What listeners say about Hollywood Animal

If you love behind the sceans of hollywood you will love this book!
easy listening narration and full of great stories. 28 hrs of listening went like a flash.If your into Hollywood and movies... this book is for you!

Very well done. Worth the time. A piece of American history and film history. Enjoy.

MUST READ FOR ASPIRING SCREENPLAY WRITERS

Joe Eszterhas is a TRUE Hollywood animal. I knew the guy was a character, had to be Look at his body of work Show girls, Basic Instinct and Flash Dance. I LOVED THEM ALL!!!!!! A must read for any aspiring screenplay writer. Joe candid brutal honest truth is refreshing and enjoyable in a town that dose not like to air it dirty laundry. Kudos for Eric Borgosian masterful narration Loved it.

Would you try another book from Joe Eszterhas and/or Eric Bogosian?

NO, THANK YOU. THE BOOK IS A LITTLE "INSIDER" FOR ME.

THE BACK STORY OF JOE'S FAMILY WAS RATHER INTERESTING BUT THE INSIGHT AS TO THE GREED AND THE AIR OF SELF IMPORTANCE THAT PREVAIL IN THAT INDUSTRY ONLY SERVES TO CONFIRM WHAT MOST ALREADY SUSPECTED.

A LOT ABOUT JOE,A LITTLE ABOUT HOLLYWOOD.

Joe Eszterhas memoir is a strong, engaging romp through Hollywood of the 80s and 90s. "Romp" may be the wrong word, "stomp" might be better. But it's a lot of fun and very revealing. Great stories of an audacious character, who has a fascinating life history as well. The reading by actor Eric Bogosian is wonderful. My only regret is that I had to listen to the abridged version. I had waited to order the unabridged version, and for some reason it does not seem to be offered at this time?!? This abridgement is thoroughly enjoyable, but I think it's only about a quarter of the length of the unabridged book. I'm sure I'm missing a lot.

What a life! The great part for us is that it is well written. The writer does waste words.

Other than the author's exciting life, the book is all about Hollywood. You hear the good, bad and ugly.

This is one audiobook that I will relisten to after the passage of time.