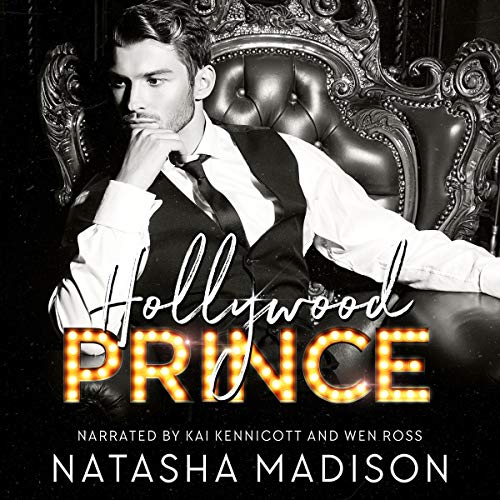 Behind the "lights, camera, action" of Hollywood lies a world of deception, love, and seduction.

Are you ready for Hollywood royalty?

A blonde, a brunette, a redhead...he can have his pick of them all on any given night and he knows it. They wait, hoping he looks up and gives them his signature smirk, choosing them over the others because that’s his game.

Except now he's signed the contract of a lifetime, one with a pesky little clause that says his zipper must stay up and his playboy image has got to tamp down. It'll be fine, a piece of cake, even - he can do this, and he’s almost convinced himself of that...and then she walks in the room.

The new PR girl whom they’ve hired to change his image. She's the star of all his dreams, but there’s one tiny little problem...she can't stand him and all of his player ways.

He knows he has only 30 days to show her why they call him Hollywood’s prince. He’s up for the challenge, so game on.

What listeners say about Hollywood Prince

The first half was 5 stars but it was downhill from there... a bit of a slog to finish after the dumb drama midway. Too bad because the characters were potentially some of my favorites...

ANOTHER 5 STAR WINNER FROM N.M.

What an enjoyable story this was. The pacing was perfect, the journey was delicious, the balance of sex to story was just right, the characters were loveable, the romance was swoon-worthy and the two-tier epilogue was the cherry on top of a cake bursting with fruit, flavor and feels. The dual POV duet style narration by Kai and Wen was (of course) spot on and my absolute favourite type of narration.. they became the characters, they created the journey’s emotional tides, they brought the story to life and (for me) they are a 5 star couple who always deliver.

Worth a credit? Definitely. We all know the storyline ‘handsome spoiled playboy meets the one’.. the one who doesn’t take his crap, doesn’t fall for his abundant charms, doesn’t drop her panties on his command (.. well unless they’re playing) and somehow sees beyond his face, fame and fortune. However, it’s in the unfurling of the plot that we can truly see the author’s skills as a storyteller.. whether they’ve peeked our interest, drawn us in, stirred our imagination, grasped our emotions, tickled our fancies and led us on a delicious journey that steals us away until its final words. This, for me, was one of those stories. With a loveable hero that, at one point, you’re gonna want to shake some sense into, a strong heroine who didn’t just fall at his feet, good character development, some nice romantic images well balanced in amongst its scenes of forbidden lust that will eventually turn into love in an entertaining storyline you’ll get lost in. And, what I really liked, was that when the inevitable ‘stumbling block’ came, it took a while to mend bridges, heal hearts and put them back on track for a HEA ending.

This is really a great book. Great series ender. Perfect narration. Natasha is one of my faves.

I really got emotional with this book. Oh my word, Carter and Erin had me bouncing around by the time when they finally got to sit down and listen to each other. Then when Carter finally realizes he was wrong and makes his way back into Erin’s heart, I really truly swooned.

The very best part of this book was picturing Wen and Kai in the characters they so eloquently read in this audiobook. I really enjoyed seeing in my minds eye both of them as these characters.

I’m so in love with Carter at the end of this story that he is going on my top book boyfriend list for sure. His journal entries had me crying so much, but definitely happy tears.

Only a story narrated by Kai Kennicott and Wen Ross, that was written by Natasha Madison would be able to make me cry!

Ya’ll. It’s not even a sad story!!! But the emotional pull between the characters is so well executed that I could not help by cry towards the end of the book. I don’t want to give anything away so I’ll just leave it at: there is a scene where you are presented with a very emotional point of view from one of the characters AND IT RIPPED MY HEART OUT!!

I really can't say enough about this whole series. Hollywood Playboy not only got me hooked on Natasha Madison, but also on Kai Kennicott and Wen Ross. THEY ARE MAGIC TOGETHER!

Their hearts fell in love

I just can’t say how much I loved this story. Their hearts knew they were meant to be together. Love love love

In a way, an enemies to lovers romance

Carter is an arrogant star that does as he pleases. This is hurting his rapport with his female fans. In comes Erin, and she is hired to save his reputation. Erin is the perfect person to control Carter's wild ways, but will she eventually fall for his charms as well. I loved the chemistry between these two. The spunk Erin had to stand up to Carter added so much to the story. This story is filled with fun, steam, and enough angst to keep you turning the pages.

Wen Ross and Kai Kennicott have a natural chemistry that shines through Carter and Erin. Wen is a wonderful Carter. His voice is perfect to bring out the arrogant attitude that Carter has. Kai has an amazing voice for Erin. Kai narrated Erin exactly as I imagined her, strong, full of spunk and even sweet. Wen and Kai made this story a movie in my mind.

Wow, Madison makes each book in the Hollywood Royalty series better than the last! Carter is a young arrogant Hollywood playboy. He sees nothing wrong with his lifestyle and isn't happy being forced to clean up his image. But he is excited about the new role he won so he goes along with the plan. What he didn't expect was to be attracted to the sweet, fiesty woman in charge of revamping his image. PR intern, Erin, is strong, ambitious, and isn't about to let Carter get away with anything. She isn't happy she has to babysit the entitled man before her. But as she settles into her duties, the more she discovers he isn't the jerk she thought he was. They effortlessly settle into their routine, and soon their attraction sparks hotter. To protect both their careers, they decide to keep their affair secret. But Erin has a hard time dealing with the women who appear from Carter's past. Their misunderstandings will tear them apart before they ever have a chance at something real. I loved how sweet yet strong Erin is, and Carter turned out to be so caring and swoony! Kai Kennicott and Wen Ross are an amazing team at bringing this story life. The way they portrayed Erin and Carter in all their strengths and vulnerabilities was so authentic and their chemistry was palpable. They made this fun and steamy romance even better.

I really enjoyed the performance by Kai Kennicott and Wen Ross. Great chemistry, super sexy, well done narration! I hadn’t read Hollywood Prince before listening to it, it’s also the first book by Natasha Madison for me. It won’t be the last!

This is another great story. These two are definitely an unlikely couple. She is assigned to him to change his brand. He is the Hollywood Prince playing the field. Narration was great!

"A Piece Of Cake"

Hollywood Prince (Hollywood Royalty, Book 3) takes a well known storyline and spools into the plot a journey that will have you slip away until you finish listening. A perfect balance of flirtatious moments and story. Carter and Erin's romance is fun, witty, & luscious. I love the double dose epilogues which was like eating chocolate curls on top of a decadent german chocolate cake.

The dual pov duet style naration by Wen Ross and Kai Kennicott was ideal. They bring their own style and turn into the characters bringing the story to life.