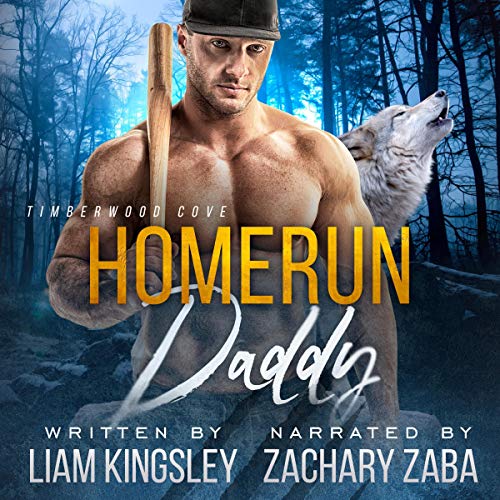 Written by: Liam Kingsley
Narrated by: Zachary Zaba
Try for $0.00

Not only is Jaxon a born alpha, he is also one by choice. Or, at least, he's about to be. His adoptive father wants to pass on leadership of the Timberwood Cove Pack to him, but Jaxon has reservations. Why? Because, this shifter wants his mate.

When Jaxon scents his fated mate at a local diner, he knows it’s only a matter of time before he claims the man. But their courtship is complicated. Even though Bryce is an omega, he has no idea shifters exist. What's more, he blames a wolf for the death of his sister and his current painful circumstances.

After causing an accident that left his sister dead and himself with chronic injuries, Bryce can’t screw up raising his nephew. Money is tight, and Bryce’s new disabilities make caring for a young boy even more difficult. When he meets Jaxon, the man is too good to be true - a caring alpha who coaches his nephew’s baseball team and looks at Bryce with heat and tenderness.

Will their rapidly growing family strike out? Or will they be a home run?

What listeners say about Homerun Daddy

Such a great first book!

I am finding Liam Kingsley to be quite adept at crafting shifter stories. I loved how Jaxon and Bryce's interactions felt so real. I was hoping for a bit more to come of the information we learn regarding Bryce's sister and what it might have meant for complications with shifters and Jaxon's pack. Zachary's voice for Jaxon was so good! I love the deep rumble of it, it screamed alpha! I did notice that Zachary isn't the narrator for the following book which is a disappointment for me but im excited to try out the next books!

I really enjoyed this story. It’s low in angst and sweet. I like the Bryce and Jax even if Jax frustrated me with his choices a few times. I’m glad it worked out for them. Oh, and these two were hot together.

I wasn’t expecting to get teary eyed but Liam just stole my heart. His singing to his mom “You are my Sunshine”, his tears of despair for her help on his important day, him dedicating that Homerun for her.. it just broke my heart. So pure. 💜 it’s moments like this that connects a lot to a reader.

This must have been Zachary Zaba’s earlier narrations because I found it a bit funny that a story set in Pacific Northwest is being narrated with a bit of Canadian accent. But other than that, he did good on this one.

I haven't finished the story yet, still only in the first chapter. I gave it this rating because the reader is so extremely monotone that I am already having a difficult time. I may give a new rating if I manage to get through it. But damn! I'm happy to see the narrator was replaced after this book.

After hundreds of listens on Audible, I can say that this book is the most confounding story I’ve ever run across. I’ve read numerous stories involving ‘shifters’ who become wolves but never one that completely ignores biology and makes no sense at all! After an Alpha shifter finds the MAN who is his “fated mate,” the human “goes into heat,” becomes pregnant and conceives a PUP after having anal sex with the Alpha! ! Absolutely no explanation is given to how this could possibly work. The human man’s anatomy is described as having the regular male genitalia. NO ONE is the least bit surprised by this impossible development. Of course after 9 months the man gives birth through a caesarian section (as opposed to delivering the baby through his penis ?? What the hell is going on here? I kept listening expecting some explanation but one never came. I want a freaking explanation ! None of the other reviews even mention this bizarre and nonsensical anomaly.

Good story but leaves out some details that would make the story way way better. The performance seemed raced and flat. That didn't help but you can separate the two out.

This was so good and Liam i just wanted to hug him and take care of him. I really enjoyed Jaxon and Bryson so much

This book and narration blew me away. Well written and kept me locked in the entire time. The story line took me to a place that I hope to see. A world where being who you are and who you love just is. I found myself breaking down the barriers of our reality and was fully immersed in this story. So thankful for reading it and living in a time where I can.

Liam Kingsley has Done it again. This is a great start to this new series. I absolutely enjoyed it. The storyline, characters, and writing. LK is one of the best authors out here, and I'm a huge fan of his work. Zachary Zaba also did a nice job with his narration of the characters. I look forward in listening to this complete series when it becomes available on audible. I highly recommend you check this series out. You will not be disappointed. I certainly wasn't.🙂

Would I listen to it again: yes
Did the story keep me engaged: yes
Was I invested in the characters: yes
What did I like about the story? Has a good pace and likeable characters. There's some good world building and backstory that sets up for future instalments.

Jaxon, former baseball star and soon to be pack alpha, meets his fated mate the day Bryce literally falls into his arms. Bryce is raising his nephew after his twin sister is killed in the car accident that has left him with permanent injuries. Being human, Bryce is unaware wolf shifters exist and telling a human about the shifter world comes with huge responsibility, but Jaxon knows Bryce and Liam are his future.

I like that Liam plays a role in the story and isn't just a supporting character and I thought the mating ceremony and Bryce's changes were well written. I would have liked it to be a little longer with a more character development. But overall an interesting start to the series.

I enjoyed Zachary Zaba's narration and think he's done a good job on Homerun Daddy. I had no problem distinguishing characters or feeling the emotions of the story. I did think the narration was a little fast, but each character had their own voice so it wasn't too hard to follow.

Liam Kingsley hit out of the park on this book!

Jaxon, soon to be pack alpha when his father steps down, scents his fated mate in a diner after ball practice. Bryce doesn't know about fated mates or shifters. Bryce's sister died in a car wreck that he blames himself for. Now he is taking care of his nephew and trying to adopt him. Jaxon and Bryce have to find a way make everything turn out right. I loved the story line, characters, and narrator. Highly recommend this audio book!