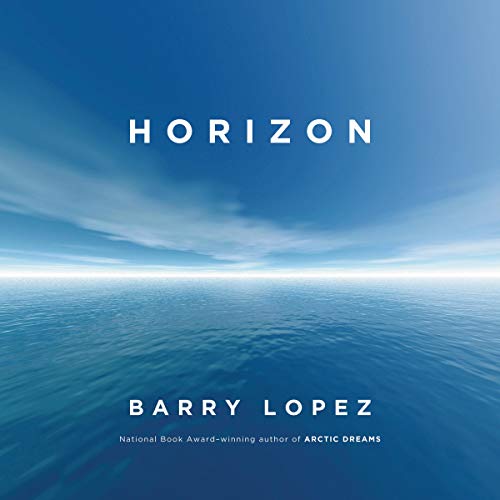 Written by: Barry Lopez
Narrated by: James Naughton
Try for $0.00

From the National Book Award-winning writer, humanitarian, environmentalist and author of the now-classic Arctic Dreams: a vivid, poetic, capacious work that recollects the travels around the world and the encounters - human, animal, and natural - that have shaped his extraordinary life. Poignantly, powerfully, it also asks "How do we move forward?"

Taking us nearly from pole to pole - from modern megacities to some of the most remote regions on the earth - Barry Lopez, hailed by the Los Angeles Times Book Review as "one of our finest writers", gives us his most far-ranging yet personal work to date, in a book that moves through decades of his life as it describes his travels to six regions of the world: from the Oregon coast where he lives to the northernmost reaches of Canada; to the Galapagos; to the Kenyan desert; to Botany Bay in Australia; and in the resounding last section of this magisterial book, unforgettably to the ice shelves of Antarctica.

As he revisits his growing up and these myriad travels, Lopez also probes the long history of humanity's quests and explorations, including the prehistoric peoples who trekked across Skraeling Island in northern Canada; the colonialists who plundered Central Africa; an Enlightenment-era Englishman who sailed the Pacific and a Native American emissary who arrived in Japan before it opened to the West. He confronts today's ecotourism in the tropics and visits the haunting remnants of a French colonial prison on Île du Diable in French Guiana. Through these journeys, and friendships forged along the way with scientists, archeologists, artists and local residents, Lopez searches for meaning and purpose in a broken world.

With tenderness and intimacy, Horizon evokes the stillness and the silence of the hottest, the coldest and the most desolate places on the globe. It speaks with beauty and urgency to the invisible ties that unite us; voices concern and frustration alongside humanity and hope; and looks forward to our shared future as much as it looks back at a single life. Revelatory, powerful, profound, this is an epic work of nonfiction that makes you see the world differently: a crowning achievement by one of our most humane voices - one needed now more than ever.

“Lopez writes with fervid wonder and fascination about all he’s seen and experienced . . . gripped by an urgency to tell ‘a coherent and meaningful story’ about the threat of humanity’s extinction as a result of climate change. . . . [Horizon] makes any travel writing that doesn’t share Lopez’s sense of responsibility and purpose seem derelict by comparison.” (The Atlantic)

“[Horizon] reflects on a lifetime of travel and exploration to some of the most extreme places on earth.... Lopez is a masterful writer, able to mix history and science with personal observation in a wonderful way. Of course, with so much of our world in imminent danger, his message about our place in a damaged world is particularly timely.” (Jessica Walker, rabble.ca)

“Barry Lopez is a straight-up magnificent writer. To read Horizon is to be transported to wondrous landscapes far beyond the pale, and thereby obtain an astounding perspective on our increasingly uncertain future. Lopez expresses faith that our species can avert annihilation by investing ‘more deeply in the philosopher’s cardinal virtues’: courage, justice, reverence, and compassion - virtues this book possesses in abundance.” (Jon Krakauer)

“Horizon is magnificent; a contemporary epic, at once pained and urgent, personal and oracular. . . . This is a book to which one must learn to listen. . . . [Lopez] has given us a grave, sorrowful, beautiful book, 35 years in the writing but still speaking to the present moment.” (The Guardian)

What listeners say about Horizon

Interestng but jumps all over the place

The anthropology was fascinating, however the author jumped too much from his experience to the remote past. I had no problem separating the timelines but would have preferred a more linear story and interpretation.