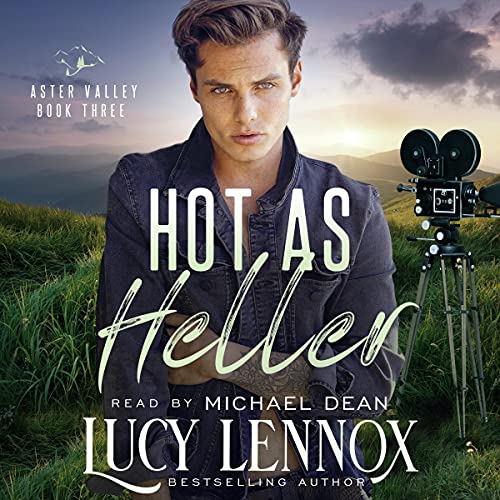 Written by: Lucy Lennox
Narrated by: Michael Dean
Try for $0.00

The man asked me to valet his damn car.

Look, I left LA for a reason. I’ve had my fill of big Hollywood stars and their even bigger egos. I want something genuine. Something real. And it doesn’t get any realer than being the new sheriff of Aster Valley, Colorado.

That is, until entitled Finn Heller appears on the scene, handing me the keys to his convertible like I’m his personal servant. The former child star and wannabe action hero is the hottest thing I’ve ever seen. He’s also a snarky party animal with legions of adoring fans and attitude for days.

Or so I thought. The longer the film crew stays in town, the more I begin to wonder if Finn is hiding his true self, one that’s as beautiful inside as out. He’s a star alright, but the kind that shines bright enough to light up the night sky...the kind I want to make a wish on. A wish Finn will find a way to make things work with me, even if it means his next role is my very own leading man.

What listeners say about Hot as Heller

This book had big laughs, excitement, love, sexy times, and wonderful characters. Highly recommended!
I would love to live in Aster Valley!

Another great listen from Aster Valley.
Love that all the couples stay Together and hang out together.
Great bunch of men.
HEA for everyone so far.
Smoking hot sexy scenes, so hot!!!
Michael Dean NEVER disappoints. Always enjoy Lucy Lennox and her writing.
well worth the credit and your time to listen.

PLEASE MORE ASTER VALLEY. I'M CONFIDENT YOU CAN CREATE A GOOD STORY INCLUDING ALL THE CURRENT COUPLES.

I RECOMMEND THIS BOOK, ITS WORTH THE $ AND/OR CREDIT.

I absolutely loved this story I couldn't get enough of it. please give this book a chance you won't regret it.

I could go for some more .

I liked it . very different. I honestly would read again . I like the chemistry they had between them . I also love Lucy lennox

This was a hot, sexy and wholesome enemies to lovers romance!!

I absolutely loved the fun banter and the characters were likeable and enjoyable.

The storyline was engaging and I had such a fun time listening to this one.

I definitely need more of Aster Valley! I'm not done with this town yet.😍

Great book, kept my attention all the way to the end, amazing audio delivery, loved it. Will be reading again, every chapter was received amazingly do recommend you give it a read.

The continuation of the stories from Aster Valley continue to make me listen all the time!! I find myself listening as much as possible so I can hear the rest of the story! The storyline is engaging and keeps me in the edge if my seat!

Should be read in order

I actually started with book 2 bc it sounded the most interesting. I waited awhile before finally getting books 1 and 3, not expecting anything great. Wow, was I wrong. I actually like 1 and 3 better. The narrator is very good as well.

the queen of MM has done it again. great story, with an interesting plot. i found myself listening to it in one day! sad it's over however, now I'm ready for the next story!

A fun addition to the series. Nothing different, but still well written and enjoyable if you're joke kicking it on a nice relaxing summer day and wanting some romance read.
I always enjoy Michael Dean's readings and paired with this lite romance, I found it a great addition to this series.