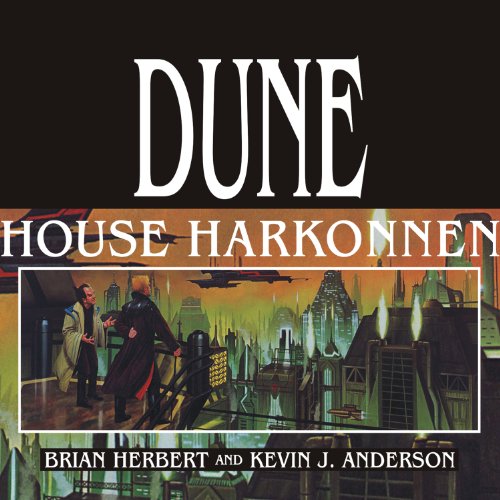 Returning to the vivid universe of Frank Herbert's Dune, this title continues the saga begun in Dune: House Atreides.

As Shaddam sits at last on the Golden Lion Throne, Baron Vladimir Harkonnen plots against the new Emperor and House Atreides - and against the mysterious Sisterhood of the Bene Gesserit. For Leto Atreides, grown complacent and comfortable as ruler of his House, it is a time of momentous choice: between friendship and duty, safety and destiny. But for the survival of House Atreides, there is just one choice: strive for greatness or be crushed.

"[T]he authors succeed in spinning a gripping adventure while going off in some unexpected directions. Anderson, who has written many successful Star Wars novels, has noted his particular admiration for The Empire Strikes Back, and his desire to emulate that film's dark take on the genre." (Amazon.com review)

no chapters just a 25 hour long file that makes it

This review is the same for all three books of the “House Trilogy.”

The author of the Dune [Chronicles] Saga, Frank Herbert, died in 1986 before completing the final installment, Dune 7. According to his son, Brian Herbert, a couple of years after the passing of his father, a safety deposit box was found with copious notes about the saga’s past and outlines for its future completion. His son collaborated with Kevin J. Anderson on the final book but also several prequels including a Prelude to Dune trilogy about the three prominently featured houses or families of the saga: Atreides, Harkonnen and Corrino.

I thoroughly enjoyed the audio version of the original Dune years ago. And, after just finishing the entire “House” trilogy, I reread the original to more freshly compare them. I must say, I think that I enjoyed the prequels more. However, I don’t know that I would have had I not read the original first. Before going on about the “House” series, because one cannot edit a review on Audible once it’s posted, a comment here about Book 1 might be helpful. The original Dune is narrated by Scott Brick, Orlagh Cassidy, Euan Morton, Simon Vance and a cast of others. At first it seemed like a good idea to have each character in the book have a unique voice. Unfortunately, from the way the book sounds, each narrator performs in a different studio setting. How do I know? Because it sounds that way. The dialogue sounds stilted, jerky and downright amateurish. Everyone of the characters in the prequels is played by Scott Brick. And they are far superior recordings. Scott Brick’s character dialogues are fluid, of the same ambience and just don’t sound dated like the original.

To continue about the prequels, they have an added depth to them. The characters are more fully fleshed out. The separate and familial relationships among all the characters are more fully explored. I realize this in not in accord with some other reviewers who sometimes seemed to find conflict with the original material. On the contrary, I found mostly only continuity that added to and enriched the original.

In the prequels we learn how Paul Atreides becomes the product of the generations of genetic “engineering” (selective breeding) of the Bene Gesserit to obtain the Kwisatz Haderach. And we learn of the backgrounds of all the other major players: Baron Harkonnen and his maniacal family, Emperor Shaddam and his, Jessica, Rev Mother Mohiam and a whole lot of background on the other Bene Gesserit “witches.” There was a mystical context in the original chronicles but these prequels greatly amplify on that.

The Guild Navigators and their relationship to the spice is mentioned only tangentially in the Original but plays a significant part in the prequels. All the female characters of Dune Prelude play a much more significant role and that too is much to the credit of these authors. It’s always nice to have that balance. We could just go on and on but why spoil it. Hopefully, I’m communicating my sense of excitement about the Prelude to Dune Trilogy. I think that each “House” installment was just excellent and the old man would have been proud of his son and his coauthor. If you’re a fan of the Dune Chronicles, you owe it to yourself to read the “House Trilogy.”

while I enjoyed this book quite a bit there is an issue where audible only has it set into 3 chapters the longest being about 24 and 1/2 hours making listening on multiple devices or in multiple sitting is quite difficult if the devices don't sink properly.

I was slow in warming up to the idea of Brian Herbert/Kevin Anderson adding side-bar stories to Frank Herbert's classic SciFi series. Had it not been for Audible including this title, House Harkonnen, in one of their periodic $4.95 sales, I would likely have never bought it. After having listened to this book, I've now added other Dune books by the Herbert/Anderson team to my wish list.

This book is well written and well performed (by Scott Brick). I appreciate how it remained true to the character personalities portrayed in the original series. Within the first hour, I was immersed in the ever-familiar universe of Dune. It seemed the writing duo made every effort to keep Frank's voice alive in this tale.

Having listened to this book, I now better understand many of the characters and plot setups in the original Dune book. I would recommend this book to any who may have enjoyed the original Frank Herbert series.

If you are new to the Dune series, it may be worthwhile to start with the House series and The Machine Crusade. These books should prove to be a great back-story to the original series.

You know you have a good book when you start down-loading the next one (like I am now) before you finish the one you're listening to now, or the one you have recently purchased by the same author.

better than the first book

Would you consider the audio edition of Dune to be better than the print version?

I like learning the backstory of my favorite characters from the original series.

What does Scott Brick bring to the story that you wouldn’t experience if you just read the book?

The narrarator helps flesh out the characters a bit.

No, it is too long for that.

This is a good book, in a good series. It was a bit formulaic and didn't quite mesh with the original series. It still is a good book on its own merits. You can tell these are the first attempts of the authors to address the material. They get it much better in later books. (legends of Dune series) as the authors hit their stride.

I absolutely LOVE ALL of the DUNE books, my favorites being The Legend of Dune series. But, it's so interesting to go back and read this trilogy because it reveals so much detail in how the plots and intrigue of the future books were set up, including the mysterious "no-ship" that is a major part of Chapterhouse Dune. This is another series that I can't get enough of, and apparently, Herbert (Frank and Brian) couldn't get enough of writing it either! There are so many branches that take off from the "main" books. I'm actually reading the whole series over again, in order, as much as I can figure out, starting with this Trilogy. I know someday I will go back and read Legends of Dune -- wonderful!

One long audible file for the book and needs to be broken into segments for each chapter as it is a pain every time one loses their place and needs to hunt to regain it. Also, the story is more of what is expected from the authors from their previous Dune books, less than polished writing and difficult story to give a hoot about. Scott's performance is on point making it almost bearable but not worth a recommendation.

Wordy, wooden, weak and self indulgent

This shouldn't have gotten past the editor.
Way too long and sloppy. Atreides, the first volume, is now revealed as the beginning off a slide into mediocrity.

Too much focus on other than Harkonnen plot. Much of the novel seemed to focus on House Atreides. Not enough Harkonnen history.