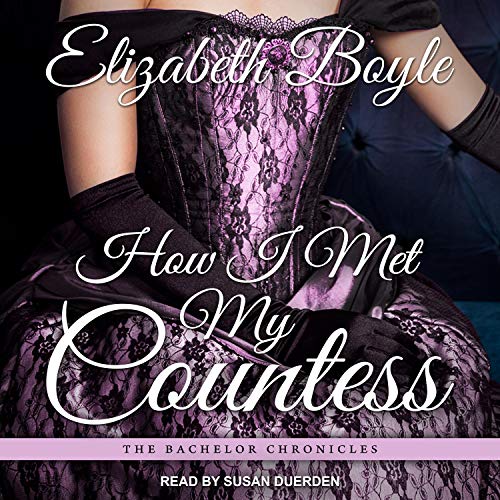 How I Met My Countess

Lucy Ellyson, the improper daughter of an infamous spy, saves the life of the Earl of Clifton. He intends to make her his countess after the war ends, but when he finally is able to return to her, he finds that she's vanished.

Meanwhile, Lucy is living a new life in the heart of Mayfair. But she's as scandalous as ever, and when Clifton finally happens upon her, she's landed in the sort of trouble that only a hasty marriage can solve. He's more than willing to step in, but their future is all too quickly threatened by secrets from the past.

What listeners say about How I Met My Countess

Not the best book for the Covid era

I use to really like this author, but I don't think she does well with long series, as the plots start to go down hill with every book. I had this one in my cart for several months before purchasing...I regret it and I am only on chapter 2!!
The story begins with the h/h meeting and going over the death of the hero's brother. Then its a flashback in chapter 2 to when they originally met , and when the brother is still alive. This reminds me too much of what's happening in real life, when someone has died and you then hear about how great they were . I was constantly trying to skip over any flashback to the brother so that I would not become invested in him, as I knew what would eventually happen to his character. There is also another death close to the heroine. I just don't think it is the kind of plot I want to read in a time when there is so much death around us. I am not sure why I am so troubled by this plot, but I guess everyone has there limits.
I bought the book for the narrator , as she is one of my favorites. I wish she would read other authors more often.
Maybe this plot would be okay in another time. I will stop now and go back to it at a later date.