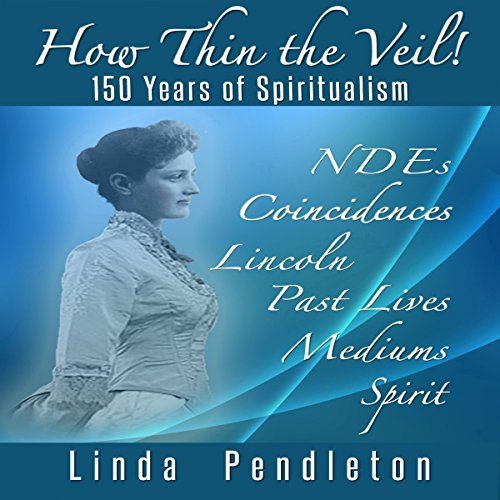 How Thin the Veil!

Written by: Linda Pendleton
Narrated by: Tim Danko
Try for $0.00

In about 1850, spiritualism reached a high interest and continued for a number of years, not only in America, but worldwide. The poets, philosophers, artists, and politicians of the time, along with the ordinary man and woman, in surprising numbers came to accept spirit communication as a comforting and fulfilling life experience.

Within Linda Pendleton's book, you will hear about the early days of spiritualism and how it became a new era that brought with it a profound understanding of human destiny after death, and of the relationship between heaven and earth.

Many historical figures considered themselves spiritualist, some more openly than others. One of our greatest presidents, Abraham Lincoln, communicated with spirit on the other side through mediums and referred to spirit as "our friends from the upper country". It has often been said his writings and speeches were inspired by spirit, especially the emancipation proclamation.

The veil between worlds continues to grow thinner, communication is increasing, and part of the increase in communication may be a result of fear being released, and openness prevailing. Curiosity, yes, but probably more than that when intuition is allowed to have a role in everyday life. When attention is paid to those subtle messages or nudges, when intuition is trusted, when new spiritual understandings come along, the mist separating our worlds begins to fade away, to soften, and life can take on new purpose and new direction.

What listeners say about How Thin the Veil!

love the history of Spiritalism in the United States of America. it has a basis that is often overlooked. the part women have played as many mediums are women