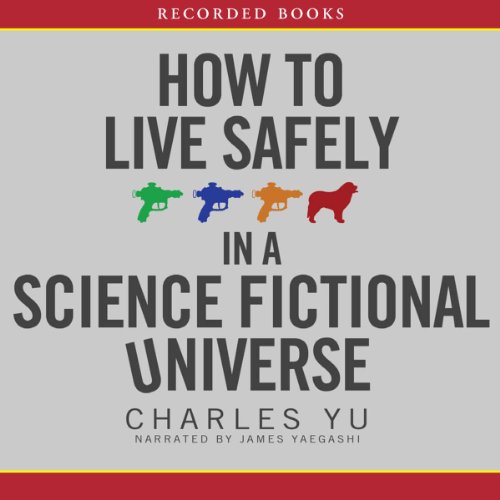 How to Live Safely in a Science Fictional Universe

Minor Universe 31 is a vast story-space on the outskirts of fiction, where paradox fluctuates like the stock market, lonely sexbots beckon failed protagonists, and time travel is serious business. Every day, people get into time machines and try to do the one thing they should never do: change the past. That’s where Charles Yu, time travel technician—part counselor, part gadget repair man—steps in. He helps save people from themselves. Literally. When he’s not taking client calls or consoling his boss, Phil, who could really use an upgrade, Yu visits his mother (stuck in a one-hour cycle of time, she makes dinner over and over and over) and searches for his father, who invented time travel and then vanished. Accompanied by TAMMY, an operating system with low self-esteem, and Ed, a nonexistent but ontologically valid dog, Yu sets out, and back, and beyond, in order to find the one day where he and his father can meet in memory. He learns that the key may be found in a book he got from his future self. It’s called How to Live Safely in a Science Fictional Universe, and he’s the author. And somewhere inside it is the information that could help him—in fact it may even save his life.

Audio Not the Way to Go Here

Would you try another book from Charles Yu and/or James Yaegashi?

I would not rule it out for either, though I was more fond of the performance than the writing. I also understand that the print version of the book has a lot of visual material which adds to the experience. I can't help but feel that, missing that in the audio version, I missed too much about what makes this book work. Perhaps I'll read Yu in the future, rather than listen.

Has How to Live Safely in a Science Fictional Universe turned you off from other books in this genre?

No. That's insane. I resent the question itself.

James Yaegashi's performance was workmanlike at least. It can be hard for me to separate the performance from the text when I don't like the latter, but perhaps it's a testament to Yaegashi that I found the performance solid despite the text.

If there's one thing that stands out to me, though, it is how much I appreciate the fact that a book written by an Asian American, featuring an Asian American protagonist and narrator, was cast to an Asian American performer when, in theory, any disembodied voice would do. That's good representation, and it's worth points in my book.

I felt mostly disappointed by the book, and it's possible to chock that up to misguided expectations. I was expecting a playground of references and in-jokes and meta-genre wackiness, and the book mostly dispenses with these early on. Later, when I started to understand that the book was thinking about the first-generation experience, I expected it to... I don't know... do more with that. Too much of the text ended up being devoted to tedious accounts of watered down time travel theory and extremely labored reminders of non-linearity. This was, to some extent, by design -- the narrator's inability to move forward with his life is demonstrated by how focused he is on meaningless tedium. But it was, well, really, really tedious.

As I said above, I learned later that a lot of the fun of this book is tied up in its visual play, and I can't help feeling that the text doesn't work very well without that.

I enjoyed Yu's metaphorical look at modern life and family. Sometimes fantastic situations are the best way to relay profound truths. It reminded me of Vonnegut.

How to Whine About Daddy for 6 Hours

The title of this book seemed so promising, the real disappointment was that it had next to nothing to do with Science Fiction or time travel. Even the idea of using a time machine to explore memories could be interesting, but it seems to be spend almost entirely wallowing in self-pity.

What could Charles Yu have done to make this a more enjoyable book for you?

I wish this book had lived up to the concept and title and blurbs, or those had been more accurate to the actual content and feel of the book. There was a lot that could have been done with the premise, if only it hadn't been so fixated on family issues.

Which character – as performed by James Yaegashi – was your favorite?

The boss / spreadsheet program was actually pretty fun. So much of the book was inner monologue that the other characters got a bit washed out.

What character would you cut from How to Live Safely in a Science Fictional Universe?

The main character's father and mother. Yes, they're the primary motivation of the book, but maybe without them there could actually be some time travel and science fiction going on.

I really wanted to like this one going in, but I was profoundly disappointed. Every time there's a hint of something interesting about the world going on, there's another ten minutes of inner monologue whining about his father and time and memory and regret and a zillion other things.I'm less tolerant than most of characters that dwell on their feelings, but I still couldn't see myself recommending this book under any circumstances.

This book is an allegory reminiscent of Richard Bach's Illusions or Jonathan Livingston Seagull. Although effective for its genre, this isn't really science fiction and shouldn't be filed here.

Weird and Ultimately Worth It

Would you listen to How to Live Safely in a Science Fictional Universe again? Why?

This is a rare audiobook I might indeed listen to again. It's so much about time loops that going back to the beginning of it makes sense.

It does drag around its central moment, but that's the point. How do avoid what you know is inevitable?

This is strong sci-fi; it's inventive in its technology, and it raises genuine logical conundra. I'm not sure it resolves all of them in entirely satisfying ways, but it does have a payoff.

What does James Yaegashi bring to the story that you wouldn’t experience if you just read the book?

He had just the right trace of an accent to make this work. He reads well, and I thought it added to the nature of what the book is doing.

I love time travel stories, and I love science fiction... Those aspects of this book were great, and I really enjoyed the writing style. What I couldn't get past, was the lack of story. It's a worth while read/listen for the science fiction, but if you're looking for a story, it's just not there...

It was a cute time story. Some parts of the characters I didn't like but they grew on me and over all it was pretty great. I am honestly really bad at writing reviews .

I was not blown away by this story. It felt like two different books smashed together. About aman trying to rekindle his relationship with his father and a hyper technical sci-fi time travel story. I was let down by the end.

When it happens, this is what happens...

I think this is well worth a credit given the entertainment factor and that it's not an overly-long book. That said, I'm planted firmly in the *I adore this and no one can change my mind* side of things though, so I'm admittedly biased. I would recommend this novel for anyone who loves Vonnegut's "Slaughterhouse Five" or maybe even Douglas Adams' "The Hitchhiker's Guide to the Galaxy"

It has heart, humor, it makes you think about life and your mortality. It makes you think about how you view and experience the world. My absolute favorite gem from the book is this (paraphrased) bit about how "time heals ... time is a machine ... it will force you to move on and you have no choice in the matter" because it's stated so simply and yet, it had not occurred to me to be quite so aware that I should pay attention to actual in the moment feelings. Even the painful ones.

James Yaegashi is a wonderful narrator and I can't wait to listen to more from him. Likewise, I look forward to more novels from the author Charles Yu.