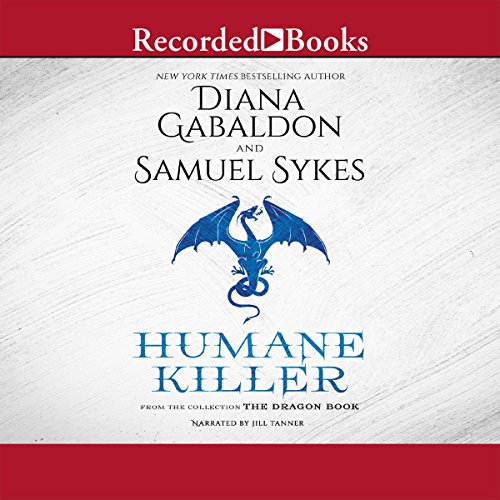 Diana Gabaldon, New York Times best-selling author of the immensely popular Outlander series, teams up with son Samuel Sykes to pen this supremely funny satire on religion, sexism, and power. A decidedly unusual pairing, half-breed sorceress Armecia and her constantly stoned sidekick, Sir Leonard of Savhael, join forces with a cowardly church vassal and a giantess posing as a nun. Their quest? To catch and kill Zeigfried, a fiery - if not too fearsome - dragon.

What listeners say about Humane Killer

I had no idea what to expect from this book. What I got was a wonderfully well written, humorous, sometimes grossly detailed, fairy tale styled short story. LOVED IT. The trio made up of the authors and the reader is unsurpassed! Enjoy and be prepared to laugh!!

I can’t recognize Gabaldon’s touch in this book. I can’t get past the opening scene. Ms Tanner does a good job with a boring text, however, it’s just way too tedious to keep me engaged.

You're going to be disappointed.

If you buy this expecting Diana's brilliant writing, you're in for a bad shock. The story jumps in chunks. It moved in such a weird way that I kept thinking I missed chapters. The most aggravating part of the book was the overuse of the word "grimace" and the bizarre way the narrator pronounced it. She kept saying "grim-MACE". Like 40 times. The editors should have caught that and fixed it.

This was a great short story.

As always Diana Gabaladon grabs you right away and keeps you sucked in. These two authors together are nothing short of amazing. Dragon hunting and wayward hero's, what more could you ask for?

Short and amusing story. Sort of a zombie parody. The word grimace was used frequently and the narrator just could not say the word correctly. She kept saying gri-MĀCE with the emphasis on the second syllable and a long A, rather than GRÏ-mäce. It was rather disconcerting and detracted from the narration. Is this really how the British say the word?

Not What I Expected But Okay

What made the experience of listening to Humane Killer the most enjoyable?

The narrator was good and made the characters interesting. I don't guess I care for fantasy like this. I bought it because of Diana and her son but it isn't a story type that I like.

Would you recommend Humane Killer to your friends? Why or why not?

No. I think most of my friends would not like it.

Which character – as performed by Jill Tanner – was your favorite?

I liked the sorcerer but really none of the characters grabbed me. I found that it didn't really matter to me what happened to any of them. I was glad to see the dragon didn't die.

Nothing extremely good or bad. I'll try another book by Sam Sykes.

Didn't grow on me

This story just didn't hold my attention...Although I really wanted to support my favorite author and her son... Perhaps I just need to hear it again...

Always carefully chosen narration.
Diana Gabaldon is master at her craft.
Sam Sykes is a fine blend and balance.

I would call this a story snippet

The story was Not bad. The length of it not good. The story could have shed more background on the characters.
At 1st I felt like the narrator was scolding or lecturing me or the characters I'm not sure she was very harsh. I went and sampled some of her other work to see if this is how she always reads stories and with the exception of one she seemed to hold a softer tone. so I'm not sure what was going with that. The narrative got better towards the end.

Sorry I wasted my money on this.

A good try. Although the author had some bright moments in this book, it was very disjointed and not smooth. One good thing is that it was short. sorry.