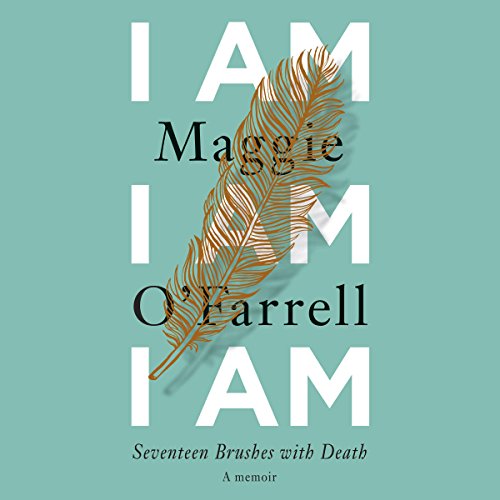 Written by: Maggie O'Farrell
Narrated by: Daisy Donovan
Try for $0.00

An extraordinary memoir - told entirely in near-death experiences - from one of Britain's best-selling novelists, for fans of Wild, When Breath Becomes Air, and The Year of Magical Thinking.

We are never closer to life than when we brush up against the possibility of death.

I Am, I Am, I Am is Maggie O'Farrell's astonishing memoir of the near-death experiences that have punctuated and defined her life. The childhood illness that left her bedridden for a year, which she was not expected to survive. A teenage yearning to escape that nearly ended in disaster. An encounter with a disturbed man on a remote path. And, most terrifying of all, an ongoing, daily struggle to protect her daughter - for whom this book was written - from a condition that leaves her unimaginably vulnerable to life's myriad dangers.

Seventeen discrete encounters with Maggie at different ages, in different locations, reveal a whole life in a series of tense, visceral snapshots. In taut prose that vibrates with electricity and restrained emotion, O'Farrell captures the perils running just beneath the surface and illuminates the preciousness, beauty, and mysteries of life itself.

"How appropriate that this audiobook memoir, an unlikely examination of life through brushes with death, is narrated by the talented Daisy Donovan. Her tone of voice exudes a veneer of vulnerability overlaying a steely strength, and her delivery is ideal for this collection of interconnected remembrances.... Donovan's pacing and appealing accent make the vignettes come alive for the listener." (AudioFile)

emotionally written and read by Daisy Donovan. a perfect voice for all of Maggie O'Farrell's work.

Her prose is beautiful!

Have you ever listened to a book where the prose is so beautiful that it makes you want to cry? A book in which every sentence astounds you? A book with sentences that make you want to exclaim, “What inspired her to write it like that? Where did those words come from?”
This is that kind of book.

Daisy Donovan does a splendid job of narrating this tragic yet inspiring story. I am moved by the strength and tenacity of Maggie O’Farrell and great full that she has chosen to share her struggles and triumphs with the world.

It’s amazing to think that one person can have such an interesting, drama filled life. It was very entertaining. The one thing that I didn’t care for was the abrupt ending. It’s definitely worth the read though.

This book is written differently than any other book I have read/listened to. The author is all over the place when it comes to time frame and, surprisingly, I enjoyed it. She also switches back and forth from 1st person to 3rd person narrative. She is very disruptive in her writing and makes you feel what she felt. It was a nice change up.

This is one book I’m so happy to have picked up audibly. Maggie O’Farrell’s writing is beautiful and paired with Daisy Donovan’s performance this telling is essentially brilliant. I cannot say enough great things about it. Looking forward to more work from both.

I’m off to read everything else Maggie O’Farrell has ever written. No extra words, such precise perfect language.

As Brilliant as Ian McEwan

I was blown away by this memoir. Each chapter is devoted to a near death experience told in a fractured way with language so brilliant that my jaw dropped. O'Farrell dissects every moment, holding time in abeyance for dramatic effect. These were the features that reminded me of my hands-down favorite writer Ian McEwan. O'Farrell is as superb a writer. I am looking forward to reading her entire oeuvre.

I AM, I AM, I AM is an autobiographical tale of Maggie O’Farrell’s life, told in 17 brushes with death, and how these experiences shaped her life. Each experience was unique unto itself. Certainly an unusual way to tell the story of ones life, yet completely spell binding. A unique way to explore the value of life. “We are, all of us, wandering about in a state of oblivion, borrowing our time, seizing our days, escaping our fates, slipping through loopholes, unaware of when the axe may fall.”

From a lorry that passed so close that she could feel it touch her head, to a childhood illness, to being aboard a plummeting airplane, to being caught in a rip tide, to a stranger with a machete, to a cesarian section gone awry O’Farrell shares her thoughts and experiences with us. In breathtaking detail and beautiful prose she tells us of the incident, what led up to it, and what happened afterward as she insightfully sees her own vulnerability and urges us to do the same. “Death brushed past me so near that I could feel its touch."

There is something magical about Maggie O’Farrell's writing. Her narrative, her language, her openness and her familiarity make her books special. This is the second book of hers that I have read and, although they are very different, I was immediately swept up by it. ⭐️⭐️⭐️⭐️⭐️ This book got me thinking about my own brushes with death: a car crash, a swimming pool, a rip tide and child birth (mine and my child’s), just to name a few. A reminder to value our lives and not take them for granted.

Maggie OFarrell is a magician when it comes to writing words. I don’t think I will ever forget this story.
Narration by daisy Donovan is excellent I could listen to her read the ingredients off a cereal box and still want to hear more.

Brilliant and captivating narrative. Narrator did an exceptional job bringing the story to life. I would highly recommend.

The searing reality of a memoir written by a talented novelist. Written to show how each of these events happened and also how they felt and how they impacted her life later.