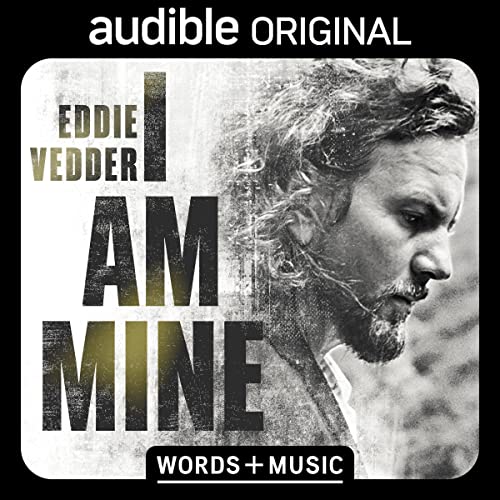 In the summer of 1990, Eddie Vedder left the surf and sun in San Diego to join a group of friends working to put a new band together in the Seattle underground. Within months, they were anything but underground; they’d found their lead singer, and Vedder went on to lead Pearl Jam on a global takeover of ‘90s culture. In this latest edition of Audible’s Words + Music series, Vedder dives deep, reflecting on a life at the intersection of art, sensitivity, and masculinity.

One of the best-selling artists of all time, Vedder is characteristically honest about the challenges of remaining authentic in the face of staggering success. He delivers a raw, emotional story on the perils and joys of fame and friendship, passing on the option of dishing out tales of rock and roll hijinks. Now you can hear his take on the power of accountability and what it takes to keep the creative flame burning as a father.

What listeners say about I Am Mine

I Am Mine - Eddie Vedder

So wonderful to listen to Eddie talk about Pearl Jam during the early years, how the band was formed, the ups and downs of success and fame, and the inspiration behind some of their music. Most profound for me, as a writer, were his thoughtful insights about creativity and his writing process. I related so much to his thoughts about creativity fuelled around trauma. As a longtime fan, listening to him both speak and sing is sublime.

I never write reviews, but this deserves one.
This is not a book. This is like sitting down with Eddie Vedder in your living room and having him tell you a story and play songs for you.

I love a good origin story and this is it. I enjoyed his acoustic performances throughout.

Grab a glass of wine and enjoy the chat.

Absolutely loved it, I could listen to Eddie read the phone book, this has great stories and insight, wonderful music as well.

Please do another one Eddie!

It’s like being in the same room with Eddie!

Listened over two nights driving home from work and it’s great! I highly recommend it for any Pearl a jam fan even if you think you know everything about Eddie Vedder

Eddie, the only artist who makes me weak at the knees, and yet his words make me feel stronger. The acoustic songs, general background about the inspiration behind them, and hearing about his greatest joys and tragedies as an artist has just made my heart grow about TEN sizes.

Wow, an 80 minutes that I absolutely loved.

Ed at his core. This is a fascinating tale. Thank you for sharing Eddie.

Eddie at his finest!

A must listen to, especially if you are a fan of Eddie Vedder. Perfect Ed!!

As far as the history, nothing new that Pearl Jam fans don’t already know, but definitely some new details and perspective on the stories Ed tells.

Light hearted, scattered and his guard is down…which makes for great ramblings of takes and tales that, for me, has made Pearl Jam one of the most important bands of my time.

As a 52 year old, husband of 21 years, father of an 18 year old son, scars, triumphs, insecurities, strengths, and many memories involving concert experiences with the band Pearl Jam- the simplicity, agenda free honesty of this personal share some how closes the gap between icon and human. Clearly we are closer by virtue of our common traits than we are different defined by who is on stage or who is watching the stage. Thank you for sharing- the words within this share is likely a part of what makes the fans appreciate the experience you’ve created- something rooted in flawed perfection- similar to all of us- one world.

All PJ fans need to listen to this!

Hearing stories straight from EV’s mouth and the acoustic songs in between stories…So inspiring, insightful, and amazing. A must listen!

The voice of a generation

Words + Music continues to impress me with the artists chosen and the amazing stories they've shared. This is no exception. For such a short piece, Vedder showed amazing focused insight and openness. Highly recommended for fans of him or this series.

Eddie at the heart

Loved the glimpse into his heart and music . Thanks Ed for great view . John W

Rocket fuel can be fatal!

I'm happy to hear these lyrics in this format, especially Better Man. All are familiar of course, but to hear the chorus, "I want to be a better woman, but you need to be a better man" is new, exciting and refreshing all at once! TU Eddie. I hear a woman's true feelings in that particular (and new to me) lyric/chorus.

Of course it is wonderful, it’s Eddie and he is so real. As an 80’s rock girl I love the 90’s grunge bands and Eddie brings it all home with his realness and ability to stay close to the feminine point of view in his lyrics and song. Total heart!

Thanks to Eddie Vetter for sharing

It felt good to hear, in Eddie's own words and voice a few glimpses into his life. Though there was understandably not a lot of intimate personal sharing (the world eats enough of the famous), I thought it brave that he spoke of the Roskilde concert, and the Ticketmaster- power- monger s---ts, and sent him another thousand blessings for taking on such a noble cause, even when the outcome was so disappointing. Did everyone thank them for that? I hope so.