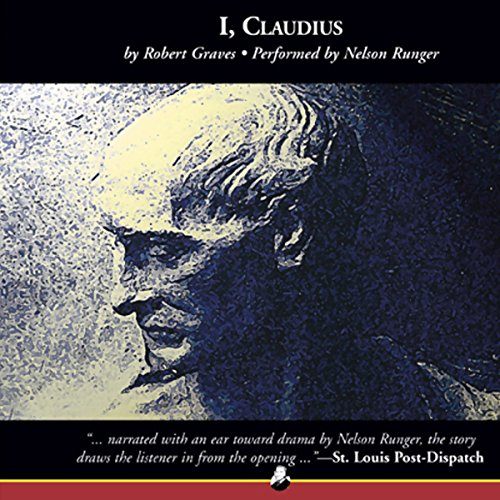 Written by: Robert Graves
Narrated by: Nelson Runger
Try for $0.00

Here is one of the best historical novels ever written. Lame, stammering Claudius, once a major embarrassment to the imperial family and now emperor of Rome, writes an eyewitness account of the reign of the first four Caesars: the noble Augustus and his cunning wife, Livia; the reptilian Tiberius; the monstrous Caligula; and finally old Claudius himself and his wife, Messalina. Filled with poisonings, betrayal, and shocking excesses, I Claudius is history that rivals the most exciting contemporary fiction.
©1934, 1961 Robert Graves (P)1987 Recorded Books
Classics Historical Fiction
Show more Show less

What listeners say about I, Claudius

Put aside all thought of stuffy classics. Think well-spun tale, full of twists and turns, subterfuges and bloody tyranny. Bear in mind that the BBC at the peak of its tour de force of TV drama production in the '70s and '80s made these two books into a masterpiece surpassed only (perhaps) by Brideshead Revisited. You can't do that with dull material.
As the title siggests, the books are written in the first person, as the autobiography of the partly disabled, sickly survivor of the Claudian wing of the Roman aristocracy who became emperor by flying below the radar and outliving all the other candidates. The choice of reader is critical, as we are listening to an elderly man tell his long and convoluted life story. Nelson Runger's voice rumbles along with just the right timbre and clarity for the character of the wily and learned Claudius. More importantly he has such a fine actor's grasp of text and meaning that we never, for one moment, feel that we are being read to. We are simply being told the bloody, scheming, erotic and shocking tale of Rome's ruling dynasty at the peak of its imperial power, spun out as an captivating yarn.
While never claiming officially to be an historian Graves was a close descendant of German historian Leopold von Ranke and prized historical accuracy. So much, if not all of the two books is historically accurate, a perspective which serves as the binding sauce to Graves' words and Runger's delivery.
One of my very best Audible purchases, which I will listen to again and again.

This book is a superb read if you enjoy historical fiction. It's also excellent if you enjoy biography/autobiography so long as you don't take the subject matter as entirely accurate. It's written as "autobiography" of Claudius, fourth emperor of the Roman Empire. Though the book (and it's sequel, Claudius the God) finds it's foundation in the Roman biographies of Suetonius and Tacitus, much effort has been made by Graves to cast Claudius in as favorable a light as possible. To this end, Claudius is a sympathetic and intelligent character whose base neglect by the earlier Caesars is only to the detriment of the empire.

This book carries the life of Claudius from the political intrigues before his birth up until his comical accession as emperor. Graves' second book, Claudius the God, carries the story practically up to Claudius' death.

The reader is excellent and his voice along with the text allows you to lapse into thinking that you are listening to Claudius himself.

This book is an excellent way to acquaint yourself with the character of Rome at the dawn of the first century. I, Claudius plunges you into a world of intrigues, murder, cruelty, and vice-- in short a world in which "Poison is Queen."

If you are anticipating a page-turner-'novel' don't purchase this audio book. It is more like a well dramatized history. The story is told in first person by Claudius himself, and follows his life from its earliest years to nearly the end of his life. Claudius was born a cripple and a stammerer, and it is amazing to see how he not only overcame his disabilities, but how he used them to his advantage. Hundreds died in the struggle for power, but every killer overlooked 'the half-wit.'

The narrator is top notch. I couldn't give his performance a higher rating. The sound quality is excellent.

A good book, not a sensational one. I might find myself re-listening to it someday just to re-aquaint myself with this era in human history.

I highly recommend this audio book. The book itself, by Robert Graves is a classic. Its an in depth , richly painted portrait of the Julio-Claudian dynasty as seen through the eyes of its most unlikely members. However, the performance of Nelson Runger as narrator makes this a particularly good listen. He did a great job of becoming Claudius. When a narrator can disappear into the part, and really become the part, thats pure joy!

Claudius of this book is not the Claudius of history. That is a very good thing. The real Claudius was not likable. This is Grave's autobiographical account of Roman emperor Claudius. Claudius is physically weak, drools and stammers-and this is what kept him breathing, while all other threats to his grandmother Livia's schemes drop dead. There is lots of intrigue, sex, murder, suspicion and more intrigue. You will have fun listening to this one.

Be sure you get the version narrated by Nelson Runger. He is superb as the voice of the stammering idiot, and he shines. I have another version done by Fredrick Davidson, whom I love as a narrator, but he did not fit the role of Claudius.

DONT PASS THIS BOOK UP!

This book is one of my favorite listens of all time. As well as being one of the best Historical Fiction books ever written. Take a chance on this one. But if you do, here are a few things to read first:

Firstly, forget that this book was written in the 1920's. If I hadn't known this fact, I would have never guessed. I am a great fan of modern historians and shy away from books written in the early 20th Cent. Robert Graves is the exception.

No soap-opera has more intrigue, lust, murder, betrayal and excess than the true tale of the reign of the Caesars of Ancient Rome. The tale is complicated and full of twists and turns and too many minor characters to keep track of. What makes Mr. Grave's telling of the tale so engrossing is the way he uses the oft disregarded "Uncle" Claudius as the fly on the wall witness to the madness. The real Caesar Claudius was a historian before he was anything else, making the telling of his tale believable and reasonable in its details.

There have been a few reviews complaining that the narrator is boring. NONSENSE. Nelson Runger MAKES this story seem totally believable. His unassuming, self-depreciating, kindly voice is the exact illustration of what "Poor Claudius" might have sounded like. HE IS PERFECT. No inexplicable English accent to make it sound more "historical" here.

Another complaint I've read is that Graves uses the modern names of regions and countries in his tale. This is FICTION and most of us don't know exactly where GAUL was back then. But I sure know where Germany is. It's a non issue. If you are THAT superior in your tastes, perhaps you should stick to true biography's.

One caution: I waited until the last chapter of the book expecting to hear the tale of Claudius's actual reign included - he doesn't tell. The book ends with the first moments of his ascension to the throne. The good news is that there is a follow up book that does. Much to my delight!

I thoroughly enjoyed this book

I felt like I learned an immense amount about ancient classical figures whose names I had known but couldn't have told you much else about them. In addition, I was entertained, engrossed, and even horrified (by the how violent their world was). I'd recommend it if you like history and/or historical fiction (this isn't fiction, but it reads like it). The reader was very good.

Even though it was written over 75 years ago, I, Claudius outshines many modern works of historical fiction in its detail, drama, and accessibility. Its narrator may not have had the most interesting life story himself, but as a fly-on-the-wall witness to several generations of backstabbing Roman politics, debauchery, and familial intrigue, not to mention turbulent times in the life of the empire itself, he plenty of tales to tell. It's obvious that Graves took some fictional (and a little bit of mystical) license with his history, but he seems to have done his research. I learned a great deal about Rome during its Imperial Period.

Perhaps the book's a little too fact-oriented at times; it relates a lot of minor events and anecdotes that don't have much to do with any larger plotline. The large cast of briefly-seen minor characters and the complicated family lineages of Roman nobility can be confusing, as well.

But, none of that undermined my enjoyment too much. Graves provides a few heroes to root for and plenty of villains you'll love to loathe, particularly the cruel, cunning Livia and the depraved Caligula (a leader who makes America's worst heads of state look like saintly paragons of wisdom and virtue). For patient readers, I, Claudius is an absorbing historical soap opera. Nelson Runger's grandfatherly voice is a perfect fit for the audio version.

A very good story and enjoyable history/historical fiction.
This account is questioned by historians in several areas including whether Livia could have poisoned all of the people she is alleged to have in this book. However, I have heard one college professor of Classical History say that you absolutely should read this book to understand this fascinating period of history.
Highly recommended!

I, Claudius was written as if it were the confidential autobiography of Claudius, the fourth emperor of Rome 41-54 A.D. The main caricature Claudius tells of the intrigues of his day and age. The story starts off a bit slow but the story is laying the foundations of the future intrigues of sex, murder and betrayals.

The audio is good quality.