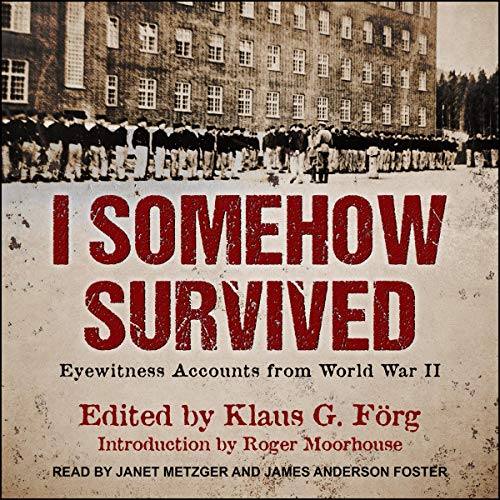 The first in a series of books, I Somehow Survived is an extraordinary collection of true stories giving testimony to those who survived World War II. Based on interviews with numerous veterans from across the spectrum of wartime experience, the book documents and reflects upon one of the most gruesome times in history.

From anti-partisan warfare in the French mountains and atrocities in East Prussia to the experience of a Norwegian concentration camp, the accounts include rarely heard stories from a range of people caught up in the war. With the distance of time, these survivors have been able to offer new perspectives on their experiences and expose truths they would not have dared admit several decades ago.

German Army officers reveal their role in the Vercors and Kiev massacres. A Luftwaffe officer-applicant who never flew describes service on the ground. And a Norwegian woman writes of marrying a German Kriegsmarine while her mother was in a Norwegian concentration camp for political activity and her father was in hiding from the Gestapo. "I have no objection to your marrying him," her father told her, "I just want them to give us our country back."

What listeners say about I Somehow Survived