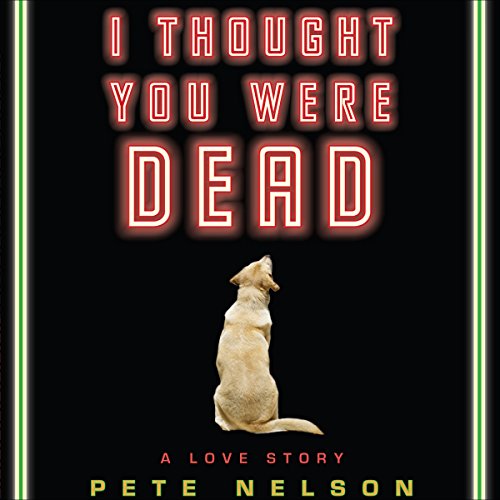 I Thought You Were Dead

Written by: Pete Nelson
Narrated by: Josh Clark
Try for $0.00

Early Audio Release - get I Thought You Were Dead here five weeks before print/CD publication.

For Paul Gustavson, a hack writer for the wildly popular For Morons series, life is a succession of obstacles. His wife has left him, his father has suffered a debilitating stroke, his girlfriend is dating another man, he has impotency issues, and his overachieving brother invested his parents' money in stocks that tanked.

Still, Paul has his friends at Bay State bar, a steady line of cocktails, and a new pair of running shoes (he's promised himself to get in shape). And then there's Stella, the one constant in his life, who gives him sage advice, doesn't judge him, and gives him unconditional love. However, Stella won't accompany Paul into his favorite dive bar. "I'll roll on dead carp, I'll even eat cat turds, but that place grosses me out." Stella, you see, is Paul's aging Lab-shepherd mix, and she knows Paul better than he knows himself.

In I Thought You Were Dead, author Pete Nelson delivers a novel that is all at once heartwarming, heartbreaking, and heart-wrenchingly funny. Most of all, it's a story that proves that when a good dog is by your side, especially one with whom you can have an engaging conversation, life can be full of surprises.

“A cunning and completely winning novel. . . . You will fall in love.” (Susan Cheever, author of American Bloomsbury)

What listeners say about I Thought You Were Dead

By the title of my review, you might think I am talking about the perceptive, prescient, and highly verbal dog, Stella, best friend to the main character. However, it's not about that. She's terrific, believable and completely relatable.

It's that I just wonder why or how anyone can maintain two concurrent significant others, and why or how said SO's are willing to tolerate the uncertainty. Once I got past that roadblock, however, I found the book completely enjoyable and full of spiritual and emotional learnings, especially concerning what constitutes a suitable mate - is it the ability to provide economically and to furnish the comfortable life circumstances that would allow access to more opportunities for the individual ? Or is it compatibility on a deeper level, a connection that renders two people more like soul mates?

I found the conversations between the main character and his stroke-victim father particularly full of feeling, in addition to being an inventive literary device, using the computer and the IM system. The words "yes" and "no" have never been so weighty.

I did not, however, think Paul's sudden conversion to an alcohol-free life was realistic. After a curt message from his father, Paul simply destroys all the alcohol in his house and never again consumes another drop. It just doesn't happen that way, unless you are NOT an alcoholic in the first place. And in that case why such extreme measures?

I thought the narrator's hoarse and husky voice gave the impression that Paul was more of the self-defined "loser" than he actually was. Even though the narrator did an excellent job of conveying nuanced emotion, the voice had a touch of vulnerability that I didn't want. I would rather have thought of Paul as more of a strong and vibrant personality, even though his life circumstances were not optimum.

Still, a four-star read, and well-worth the price!

This is a well written book about the gradual awakening of the main character. He has quite a bit of trouble relating to people and his main companion is his dog. This book will be great for dog lovers who struggle with intimacy with people. Although well written - and at times touching and funny - when it was all over I felt like I could have spent my time better reading a more interesting story.

A Glimpse At Life With Stella and Paul

My first disappointment is that I could find no other audio books by the author, Peter Nelson. That said, I slid into the story, page-by-page, my interest deepening as the chapters unfolded; bringing me closer to Paul and Stella. Then I grew to appreciate the other characters presented to me through their interaction with Paul and Stella. Stella's indomitable spirit and her heartwarming relationship with Paul I found to be refreshing, touching, and naturally believable. As a human who contends life is so much more fully enriched when shared with a furry soul-mate, the conversational exchange between Paul and Stella was delightful, familiar, and credible. There was a point in the book where I felt I might not be able to finish hearing about the world that was Paul and Stella. But, I was quickly surprised by the author's gift for offering other avenues--newly opened doors; other roadways the character could take.The author did this with such commendable timing and subtle redirection that I soon found my attention and focus shifting, following Paul's questing heart and discovering, with him, what life holds for those individuals willing to risk the known and comfortable for the often scary and seemingly-threatening choices we must sometimes take if we are to survive, grow strong, and appreciate life. The narrator was engaging and able to paint, in my mind's eye, the visual rendering of each character and pair those images to their personalities with delightful clarity. I hope this author has other books in the works, and that Paul and the other charismatic individuals he introduced us to in this book will be featured in more stories.

Adorable. A must for all real dog lovers.

I am strickly a murder mystery,who dune it listener. While looking for something really meaty I stumbled across, 'I Thought You Were Dead.' After reading the notes and realizing this was far from a murder mystery, "I thought Oh Why Not". Being a lover of dogs and the owner of a 10 year old aging cocker, I fell into the book very quickly. What a fun listen. Stella was logical, intuitive and lovable. I couldn't help but look at my COCO and wonder what she might say if she could talk. If you are dog lover, your heart strings will get a tug......enjoy

Where does I Thought You Were Dead rank among all the audiobooks you’ve listened to so far?

This was my first audiobook I've listened to and I loved it. I have a 10-year-old dog named Stella, so the story really touched me.

Have you listened to any of Josh Clark’s other performances before? How does this one compare?

No, but he did a wonderful job and I would listen to him again.

Who was the most memorable character of I Thought You Were Dead and why?

Stella, because I imagined her humor and wit to be similar to my Stella's if she could talk.

Before listening to this, my first audiobook, I was skeptical of the whole concept of listening to a story rather than reading it, but I thoroughly enjoyed it and can't wait for another.

If you could sum up I Thought You Were Dead in three words, what would they be?

Inside look as to how our dogs thing of us and how much we really confide in them.

What was one of the most memorable moments of I Thought You Were Dead?

Spoiler Alert: when the inevitable happened...the narrator just did this scene so well. I had tears pouring down my face.

If you only knew what your dog was thinking!

For All Lovers; Particularly Dog Lovers

This is a bittersweet tale. Our hero has a lovely relationship with his aging dog Stella, although the reader can't be sure whether Stella is talking to him or she is his conscience. As he goes through his passage to maturity with his girl and his family, is Stella the voice of reason or is she his enabler? All this will be solved by the ending, but I caution the reader not to expect a comedy. It is funny, but mostly it will take your heart on a marvelous emotional excursion.

I don't normally read such "touchy-feely-finding-oneself" books because usually they are just too sappy. This one is actually surprisingly addictive. I couldn't relate to Paul or his life or his relationships (girlfriend, family, dog) and yet I kept reading because I wanted to see whether or not he grew up, grew a pair, sorted out his life, and had a happy ending.

It is extraordinarily believable for a book that has a talking dog as a main character. One might think that this basic premise would make the book silly, but Stella acts/reacts exactly how one would expect a dog to act.

It is emotionally heavy and his and his girlfriend's behaviors had me frustrated (in a good way) throughout most of the story. She was just a bit too "holier-than-thou" for my taste. I also have a little dislike for the last 1/5 of the novel which took on an Alcoholics Anonymous flavor which was just a tad convenient and somewhat preachy.

The narration is very good.

Stay with this one long enough.

I recommend this novel, esp. to those in want to believe in the potential for transformation and the power of love. The first half is very slow and, honestly,I struggled w not careing much about what happens to the main characters. But, I hung in there and was rewarded wtih some interesting and surprising turns.