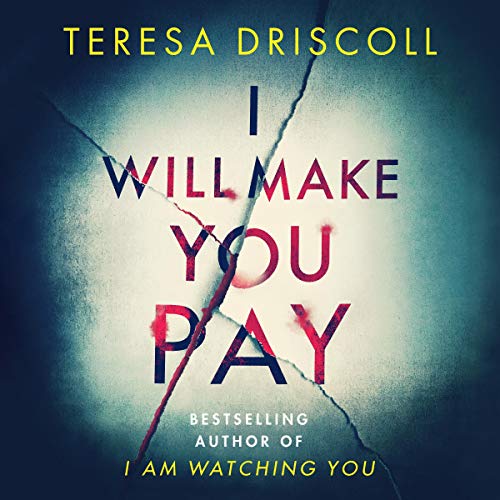 I Will Make You Pay

It seems like an ordinary Wednesday, until the phone rings. A mysterious caller with a chilling threat. Journalist Alice Henderson hangs up, ready to dismiss it as a hoax against the newspaper. But the next Wednesday, the stalker makes another move - and it becomes clear that this is all about Alice.

Someone wants her to suffer, but for what? Her articles have made her a popular local champion - could it be her past rather than her work that’s put her life in danger? Alice is determined not to give in to fear, but with the police investigation at a dead end, her boyfriend insists on hiring private investigator Matthew Hill.

With every passing Wednesday the warnings escalate, until it’s not only Alice but also her family in the stalker’s sights. As her tormentor closes in, can Alice uncover what she’s being punished for before the terrifying threats become an unthinkable reality?

What listeners say about I Will Make You Pay

I have to start recognizing Knowelden's name because I can't stand her breathy whispery yet melodramatic delivery.with lots of spitty s-sounds. All the reviews indicated a good story but I just couldn't stay with it long enough to find out. That's why God invented Kindle.

I really wanted to like this book. I could not get past the breathy, weirdly whispering narrator voice.

Liked the title, have read other books by this author, didn’t like this one.

This is a must read!! This Author is amazing! Leaving you with just enough information to keep you guessing and interested! I love her other books and if you are on the fence, get it! Your mind will be blown!

Well writtwn but too long and the ending is disappointing. Too many carachters that bring nothing to the story.

Started out well, but about 2/3 into the story it started seeming ridiculous and I stopped caring.

Perhaps it was too long.

Exciting & captures your attention from the start!

I sort of suspected the villian from the beginning, but thought "no way". There were too many things that led me to think otherwise. The author did a wonderful job of unraveling all the twists!

It has suspense and I loved the way the pieces fit together. Liked the character development. Nice work by author and narrators.

You never really know the people around you

This book had a lot going on at first and I had a hard time following it. It was jumping from different people and their perspectives and back again. As I gained more information into characters it began to be easier to follow. This book will make you think about the people around you and how much you really know about someone. Driscoll does a great job of pulling you into the psych of her characters and making you understand why they are the way they are. A great listen for the fellow psych thriller fan.