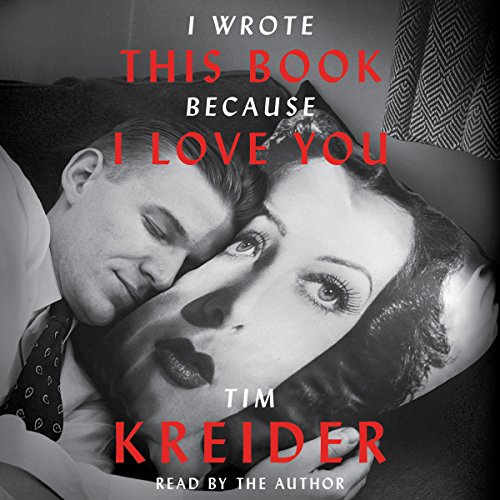 I Wrote This Book Because I Love You

New York Times essayist and author of We Learn Nothing, Tim Kreider trains his virtuoso writing and singular power of observation on his (often befuddling) relationships with women.

Psychologists have told him he's a psychologist. Philosophers have told him he's a philosopher. Religious groups have invited him to speak. He had a cult following as a cartoonist. But, above all else, Tim Kreider is an essayist - one whose deft prose, uncanny observations, dark humor, and emotional vulnerability have earned him deserved comparisons to David Sedaris, Sarah Vowell, and the late David Foster Wallace (who was himself a fan of Kreider's humor).

In his new collection, I Wrote This Book Because I Love You, he focuses his unique perception and wit on his relationships with women - romantic, platonic, and the murky in-between. He talks about his difficulty finding lasting love, and seeks to understand his commitment issues by tracking down the John Hopkins psychologist who tested him for a groundbreaking study on attachment when he was a toddler. He talks about his valued female friendships, one of which landed him on a circus train bound for Mexico. He talks about his time teaching young women at an upstate New York college, and the profound lessons they wound up teaching him. And in a hugely popular essay that originally appeared in The New York Times, he talks about his 19-year-old cat, wondering if it's the most enduring relationship he'll ever have.

Each of these pieces is hilarious and profound, and collectively they further cement Kreider's place among the best essayists working today.

Tim is a sensitive and witty writer who can spin a great yarn, bringing humanity and a great turn of phrase to a reader yearning for both. He can certainly be self-aware and self-critical, but in politics and related social culture, he is hectoring and tiresome. To be fair, this book is only dominated in parts by such pandering to a social tribe. But how many hairs in one’s soup should one tolerate?

Now some may consider me harsh here in my criticism, but those are the same people who revel in being of the same tribe as Tim here. This is the tribe of self-satisfied progressives who are just as pig-headed and annoying, when they speak like Tim does here at times in this book, as those on the right whom they so eagerly put down as luddites, or worse. Both sides are part of the problem and not the solution. I identify with neither group. I don’t want to constantly hear the prejudices and limited worldviews of either side, since the news and popular culture are both drowning in the noise that such political grandstanding engenders. Pandering to your tribe never looks good nor wears well. It is lazy – both morally and intellectually. I may agree with much of the progressive agenda, but this is all more nuanced than the caricatures portrayed in this book. Tim, you’re writing now - not cartooning. And good cartooning includes subtlety and shading, in order to communicate and not simply resonate,

The truth is that the progressives are especially annoying in one way. They see themselves as particularly and uniquely open-minded and enlightened. At least most on the right are not so confused, and frankly delusional, to claim that moral high ground.

I’ve no doubt that Tim is a nice guy. I’ve no doubt that I’d love to spend time with him and I suspect that we could even be great friends. He is uncommonly wise and perceptive in so many areas, and his wit and writing are supremely entertaining. I see us sharing drinks on a sunlit patio having the time of our lives, laughing and solving the problems of the world, as we delve into our own addled psyches. But when the conversation veers into politics, I’d be forced to yell “shut up Tim”. Heeding my admonishment, good times would return.

I write this Tim, as a friend.

Grappling with angst as a chronically single man - with a cat. As Erica Jong said, “Writing is easy just sit at the typewriter and open a vein.”

We have all been there is some degree or another and the questions we asked of ourselves at the time and later are better explained by a person who is smart and has an expansive understanding of the English language and poetic delivery too make the most uncomfortable truths palatable.
Thank you Tim.

Not his best one but still enjoyable

What did you love best about I Wrote This Book Because I Love You?

Krieder's humor is very contagious and relatable on many levels.

What other book might you compare I Wrote This Book Because I Love You to and why?

It's very similar to his previous book: We Learn Nothing

He is a great narrator.

I felt that during some parts of the book he tended to ramble or the dryness of his humor didn't really catch on for me, hence why I have given this 4 stars.

This book is delightful company, and reads like a conversation with a best friend. I wholeheartedly recommend it to anyone who is interested in intimacy that defies categorization.

I could listen to Tim talk about his life all day. Life so simple yet so complex.

I needed this book

I have been in a crumbling relationship and this book came at an opportune time to help me revisit my own relationships, where they went wrong and how I got to where I’m at. Tim takes you to those dark places in your head that you should probably spend more time in. It’s a great listen, so glad I found it.

Great book!
The narrator has a lot of passion but sometimes changes volume too much (he gets suddenly quiet) so it can be tricky to catch all the words at times

Can’t wait until Tim does another one... the way he reads makes it even better.