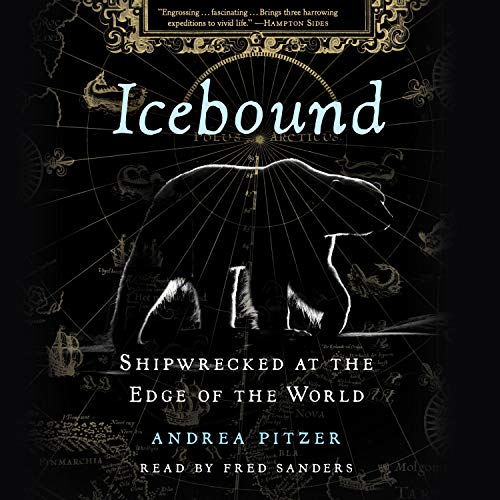 Written by: Andrea Pitzer
Narrated by: Fred Sanders
Try for $0.00

In the best-selling tradition of Hampton Sides’ In the Kingdom of Ice, a “gripping adventure tale” (The Boston Globe) recounting Dutch polar explorer William Barents’ three harrowing Arctic expeditions - the last of which resulted in a relentlessly challenging year-long fight for survival.

"Narrator Fred Sanders's grave voice and understated performance work well for this grim and brutal history of Arctic exploration. In the sixteenth century, Dutch explorer William Barents set out three times from Amsterdam to search for a northeastern passage through the Arctic to China. Everyone made it home the first time. The second time, Barents lost crew members to polar bear attacks, drowning, and a mutiny. The third expedition was a disaster, with the ship lost and the crew forced to overwinter in the Arctic. Sanders's narration is quiet and grim, a style that makes the grisly polar bear attacks easier to handle." (AudioFile Magazine)

What listeners say about Icebound

Decent story of adventure. I found the tone kind of impersonal which made it hard to really get into. I think it was important to include all three journeys, but the true survival story is really the third journey. This is worth the credit to listen tp, but not nearly as good as Endurance.

Before reading Icebound, I was so confused about William Barents I thought he was of Bering Strait. Wrong. This is "Barents" from the Netherlands who explored the Arctic in the 1590s (!) - not far from the Middle Ages. Barents was the first to attempt a northeast passage from Europe to China through the Arctic. Of course such a journey with primitive equipment and knowledge was doomed, retold in glorious detail by Pitzer, but Barents and his crew were arguably the first "modern" polar explorers. Before the Arctic was unknown. After, the Arctic was a destination unto itself. Every polar expedition since traces back to Barents. When they returned home and wrote a best selling book, there was popular hunger for more. Centuries further exploration followed culminating in the golden age in the late 19th and early 20th century. Essential reading for polar literature fans, and 16th century European history.

This is a 5-star book all around. The author deserves full credit. However, the publisher's decision not to include a PDF with maps is unconscionable. The maps are critical to this book of exploration. I was able to piece the route together using Google Maps but it was not fun or easy. Sadly I must lower the rating, which might have the effect of lowering sales of the book, but this is frankly the situation, the book is incomplete.

I felt SO COLD

This is another book that may be better read than listened to, plus I wonder if the printed book has maps, etc. to illustrate exactly where these voyages were. I myself had to get out an atlas to see where Nova Zembla was. I knew nothing about this story so I can't comment as to its veracity as others have done. However, the men the sea, the lands and wretched cold and ice, blizzards night after night, were all so adequately described that I felt the stinging numbing cold of those unfortunate men. I was glad to learn the men stayed together and cared for each other-- a drop of humanity in a beyond-frozen icescape. The reader did a good job, expressing emotion but not wallowing in it. I am a sucker for an inspirational story but I didn't cry at the end of this book. Instead, I felt proud of the men who survived by the grace of God and their own wit, strength, and humanity.

After reading Endurance, and Labyrinth of Ice, I started Icebound expecting a similar tale of survival. The book focuses on the three polar expeditions of William Barents; unfortunately, the account of the first two expeditions left me bored. This is at least in part because of the narrator - his delivery style turns a harrowing journey into a dull commute. I hope that I can try this in audiobook form at a later point, with a different narrator.

Artic winters, aggressive polar bears, many life and death moments, but narrated with all the excitement of an actuary reading a phone book.

great book about Polar exploration. it's full of great tidbits from other explorers and the root story of the Barents crew is awesome. I learned a lot and enjoyed every bit of it. highly recommend (keep a map of the Barents Sea and Kara Sea handy)

Fascinating story told as if you were there

This visceral tale of hardship and death that took place 500 years ago feels if if you're following along today. The research, writing, and narration are all great and it was suspenseful even as a historical piece with a fixed outcome.

Made me appreciate the simple things

While listening I imagined being there and what the brave sailors went through on a good day let alone the desperate situation they were in. Amazing any of them survived to tell the story and build a legend.

It was interesting but too much was about how cold it was, not surprising

While the author had to draw largely on the day to day log entries, the story came alive with animated prose and a real feel for the struggles of the crew.

an amazing adventure that I had not heard of before. Incredible man over nature Survival Story