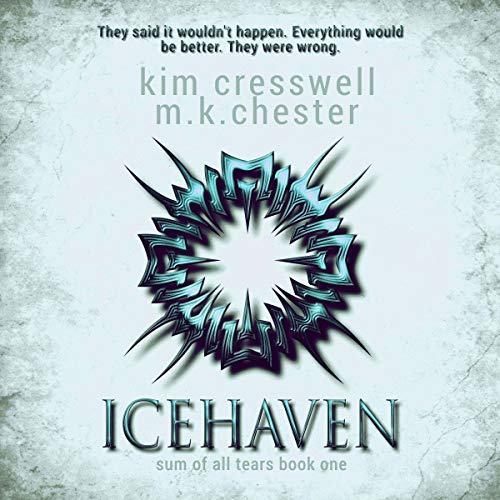 They said it wouldn't happen.

Everything would be better.

After a climate-change experiment goes terribly wrong, August Madison finds herself resurrected in a frozen wasteland.

With most of the world's population and food sources annihilated, depraved nomadic gangs patrol the lawless landscape as outlasters claw for survival.

Amid the chaos, Graysen Marx, iron-fisted leader of the domed settlement, Liberty, emerges from the catastrophic event with his own agenda.

When August crosses his path, he sees an opportunity he must exploit.

She sees an evil she must destroy.

What listeners say about Icehaven

Experimenting with climate control leads to an unexpected result. Now the survivors come together to form settlements and try to survive, and one man takes control. Is this what’s best for everyone? I was immediately drawn into this post apocalyptic tale. The authors put their own unique spin on things, and I loved it. Jennifer Swanepoel’s performance was great. She really brought out the characters personalities and emotions in this fast paced story. I was given this free review copy audiobook at my request and I have voluntarily left this review.

'No good deed goes unpunished' August' dad's climate change experiment goes horrible wrong leaving the world into a frozen wasteland. Some people have mutated genes that leave them with special gifts; Graysen Marx knew the experiment was going to go wrong that he set himself up a compound (domed settlement) where he was ruler.

The story is very entertaining and clear narration. I enjoy listening to the audiobook from beginning to end.

After her fathers climate change experiment goes very wrong August finds herself resurrected in a harsh winter land, unsure of how much time has pasted and if any of her family has survived or not. Things go from bleak to worse for August and her new friends when the the people that have been helping them make them move to the domed settlement of Liberty and do what they say, but when people are separated from each other and not allowed to talk, August knows something is wrong and with the help of a long time family friend that is now in the guards they vow to find out what it is. This book moves fast and never slows down, the action and suspense are non stop and will keep you on your toes. I loved this book and how the characters developed and interacted, it goes well with the disaster they have been thrown into. Narrator Jennifer Swanepoel does a wonderful job on the audio version, she made me believe I was there in the story with August and the others sneaking around and getting ready to move against the old guards, Graysen, and Graysen's agenda. This is a awesome book and I can't wait for more.

I would recommend this book to anyone. The narrator done a great job telling the story. Looking forward to listening to the next book by this author.

This book has pretty much everything you can think of. I was really caught off guard by a few things, gross. lol Wouldn't have thought the author would go there but she did and wow. Narration was great, she did a fantastic job bringing everyone to life and giving them personality. This book is worth thrre time and money.

Icehaven, Sum of All Tears. . Unique storyline. Well written and quite fast paced. Lots of action and Intrigue to keep your attention up until the final page. The narration moves the story along nicely. And is very easy listening. I received a free copy of this audio book at my own request and voluntarily leave this review.

I found this to be a fast-paced, well-imagined, beautifully executed story about the possible devastating effects of tampering with climate change. Of course, the intentions of said tampering were good, hoping to avert the inevitable disaster resulting from global warming, but the intentions were not the problem. Mankind’s meddling serves to hasten rather than prevent disaster and the catastrophic consequences thrust the main character, August Madison, and the rest of humanity which managed to survive the initial calamity, into a frozen and desolate world where food, shelter, and survival are not to be taken for granted. I found the premise intriguing, the storyline captivating, and the characters likeable and believable. I chose to read along as I listened to the audio version of this story and was delighted with the wonderful narration provided by Jennifer Swanepoel. I believe enthusiasts of this genre will be very pleased with this selection whether they choose to read or to listen (or both). Enjoy! While I did purchase a copy of the book, I was given a free review copy of the audiobook version at my request and have voluntarily left this honest and unbiased review. If you find this review helpful, thank you for so indicating.

Awesome new take on a post-apocalypse world! August Madison is a twenty-two year old college student on the day her father is to unveil his world changing new invention that has the potential to solve global warming. Something goes terribly awry though! The next thing she knows she awakes in a wasteland of ice and snow. Luckily she is found by some survivors that take her in to their small group. She soon discovers the cold is not the only thing to be concerned about. She learns that when the group found her she was dead, literally dead and its days after the catastrophe actually happened. She also will face gangs of raiders and a community called Liberty that promises sanctuary. Liberty is run by one of her fathers financial backers an infamous billionaire Greyson Marx. Something about Greyson and Liberty just does not seem right but it may soon be the groups only choice. This book delivers action, adventure, as well as emotion and a bit of romance. I definitely think this is worth buying or using a credit on, and I'm excited for the story to continue in the next book.

I thoroughly enjoyed trying to puzzle out how the characters were going to make it through the book. I loved the Grayson Marx characters complexity, and that the hope for survival is in the hands of our heroine. August is inquisitive and develops nicely throughout the book. I liked that her story unfolds piece by piece and isn’t just thrown at you in the first chapter. We learn about her with her throughout the entire story. The action is intense! It reminded me a bit of a Mad Max feel mixed with the book of Eli, but I’m wary of comparing the two because there are a lot of differences in the plot and storyline. The novel also had some great themes about caring for the earth and humanity as a whole. If you enjoy action/dystopian writing then this is a great book for you. I was given this audiobook in exchange for an honest review.