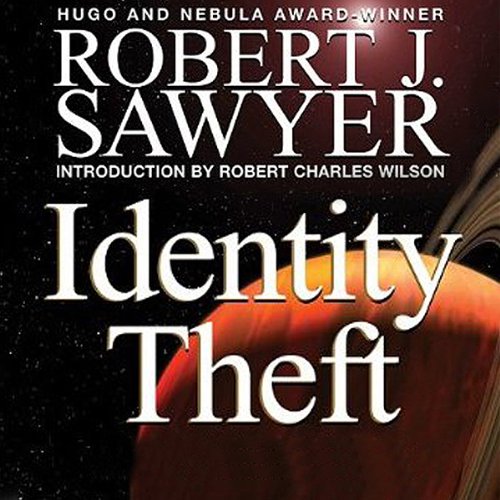 Identity Theft is a hard-boiled detective novella set on Mars. Cassandra and Joshua Wilkins are fossil hunters who have both recently transferred their minds into artificial bodies, but now Joshua has mysteriously disappeared. Cassandra must hire Alex Lomax, the only private detective on the red planet, to locate Joshua before sinister forces get to him.

Robert J. Sawyer has written 18 novels, and his short fiction has been published in numerous magazines and anthologies. He has won 41 national and international awards, most prominently the 1995 Nebula Award, the 2003 Hugo Award, and the 2006 John W. Campbell Memorial Award.

"At every opportunity, Sawyer forces his readers to think while holding their attention with ingenious premises and superlative craftsmanship." (Booklist)
"Identity Theft is on the Hugo ballot, and it is easy to see why....The conclusion is non-stop action - literally slam-bang. Highly recommended." (Ann Cecil, Sigma, the newsletter of Parsec, the Pittsburgh SF Society)

What listeners say about Identity Theft

It was a little too hard-boiled for me, touching on the typical cliches of a dame approaching a private eye but not telling him everything. The stilted style of the book kept me from ever being too engaged, but if you like old-school detective books, there are some fun sci-fi ideas about the possibility of being able to download your mind into another body.

Interesting short story but I prefer his longer books; still, it wasn't bad at all.

Where does Identity Theft rank among all the audiobooks you’ve listened to so far?

What was one of the most memorable moments of Identity Theft?

The twists in the plot!!

Alex Lomax, a private detective on Mars, has been hired by Cassandra Wilkins to find her missing husband, Joshua Wilkins. At first the solution to the mystery seems obvious, but Lomax soon discovers that it???s a lot more unusual, complicated, and dangerous, than he originally thought. Both Mr. and Mrs. Wilkins are Transfers ??? they???ve had their consciousnesses uploaded to artificial bodies. But that???s not the only reason the Wilkins case isn???t routine ??? it also involves a paleontologist who has discovered a large cache of valuable Martian fossils. Can Lomax solve the crime without getting himself killed?

Identity Theft is fast, fun, exciting, and peopled with interesting characters in an original setting. The idea of uploaded consciousnesses isn???t new for Robert J. Sawyer, but he asks some intriguing questions about that idea here. I???m looking forward to reading ???Biding Time,??? another story featuring the clever detective Alex Lomax.

Identity Theft has been published in print in Down These Dark Spaceways, The Nebula Awards Showcase 2007, and Identity Theft and Other Stories. It was a finalist for the 2005 Hugo and Nebula Awards and won the top SF award in Spain in 2004. I listened to the audio version which is 2?? hours long. It was produced by Blackstone Audio and read by Anthony Heald who is excellent.