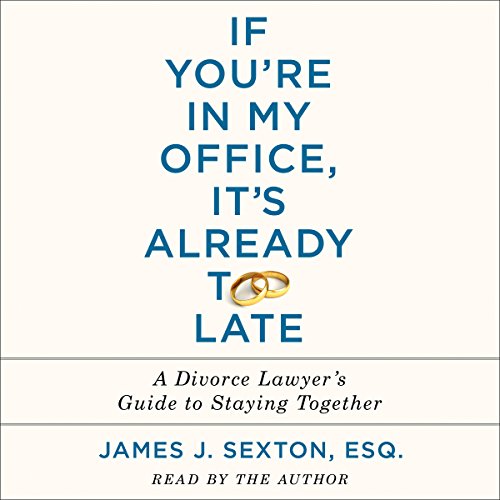 If You're in My Office, It's Already Too Late

In this pertinent audiobook, hard-hitting divorce lawyer James Sexton shares his insights and wisdom from the frontlines of divorce to keep you out of his office and improve on your relationship

Described by former clients as a "courtroom gunslinger" and "the sociopath you want on your side", Sexton tells the unvarnished truth about relationships, diving straight into the most common marital problems. These usually derive from dishonest - or nonexistent - communication. Even when the alleged reason for separation is one spouse's new "personal trainer", there's usually a communication problem that predates the fitness kick. Symptom and root cause get confused all the time.

Sexton has spent his career working with spouses-to-be-no-longer. Reverse-engineering a relationship can help to identify and fix what does not work. Ever feel like you're holding back criticism of your spouse because you just can't have that fight right now? Sexton will tell you to "Hit Send Now". Maybe you aren't as adventurous as you used to be, or need some you-time, but for some reason, it seems weird or exhausting to change up the routine now.

Sexton knows where that mentality leads and offers viable alternative paths to take. Though he deals constantly with the heartbreak of others, he still believes in romance and the transformative power of love. This audiobook is his opportunity to use what he has learned to help couples that aren't so far gone get back on track.

"Sexton's narration debut is impressive. He reads smoothly, with animated conviction and passion for his subject that shine through." (AudioFile Magazine)

What listeners say about If You're in My Office, It's Already Too Late

Not ideal for anyone who's suffered from an abusive or coersive relationship. It was entertaining. But not very uplifting and not very nuanced. A the end of the book it still hadn't really decided what tone it wanted to take. I was a bit disappointed. As someone in a happy relationship now, it lacks any new or insightful ideas. As someone who was in a not so healthy relationship, it's kind of triggering. but also he's a good enough storyteller that I made it to the end. so there's that

excellent book!! truly insightful, with a great sense of humor and so well narrated!

I loved this book and the authors candour and advice. I have been thru a divorce and wanted to be set up for success in my future relationships. This has helped me a ton! THANKS

I absolutely loved this book, and will definitely be listening again! From the entertaining and at times sad tales of divorcing couples, to the very real practical advise and thought provoking questions, this is a must read for anyone- single, coupled or married.

One of the most useful relationship books I ever read!

Relevant, helpful and thought provoking. The examples resonate with great precision. A book you would need to refer to from time to time!

Absolutely loved this book! After going through my own divorce I was on the hunt to help make sure that didn’t happen again.... this book a perfect, it’s funny, serious, and sensible. Highly recommend it!

I listened to this whole book in 2 days and found it very entertaining and educational. Highly recommend it to those who are married, those who are single, really anyone who wants to be or is in a relationship. Well done James!

This book opened my eyes to a lot of things about life in general- and not just marriage/divorce. It made me both laugh and tear up.

I loved this book, I found it very helpful and have me a lot of insight into my current relationship as well as past mistakes. Recommended for everyone. Doesn't hurt that it was funny with a hint of voyeurism into stranger's divorce.

This book blew my mind. I’ve been married for 18 years and learned more about marriage from this book then my own experience has.

I laughed out, nodded in agreement and nearly cried while listening. If you believe that the decline or demise is your partner’ fault this book gives you the sign & signposts you would best be heeding to begin to reconnect and recover from the less than stellar current state of your relationship.

Have just started listening to this book for the second time.

I truly enjoyed this book. A lot of lessons about how to be a better spouse so you don't end up needing a lawyer, or how to be a decent person if divorce is inevitable. I've been married almost 17 years, and I'll be the first to admit that marriage is hard. I'm always looking for ways to make it less challenging as well as remembering to appreciate the good things that can easily be taken for granted. This book helped me with both. In fact, I want my spouse to listen to it next. Mr. Sexton is an awesome narrator and story teller, and by the time you are done listening to this book, I'm pretty sure most will think twice about going through a divorce without really giving their marriage their best shot. I also don't want to forget to mention how hard I laughed at many of Mr. Sexton' s stories. Highly recommended this book.

Where does If You're in My Office, It's Already Too Late rank among all the audiobooks you’ve listened to so far?

What about James J. Sexton’s performance did you like?

He is a amazing story teller , full of humor and great marriage advise . i will reread this book many times through out my life . i give it a 10 out of 10

I experienced a full spectrum of emotions through out this book . it was a entertaining and enlightening and educational journey full of wit and humor.

Everyone should read this!

I am not married, nor have I ever been, but this book is a must read even if you have never been in a position to need a divorce attorney. James Sexton shares wisdom about relationships that is candid and spot on. The kind of stuff that if you have ever been in a relationship can be applied to any couple. Hindsight is 20/20 and this book gives you that look into what your life could be life, hopefully in time to fix the problems before they start. He uses wit, anecdotes from his years of experience on the other side of the table (the "too late" he is talking about) to really get to the heart of why people have relationship issues and what they should do instead. Like I said, I have not been in a situation to need a divorce attorney, but this book was so compelling and entertaining I actually just read it because it was interesting. The author himself reads it and he has the right personality to really make you want to keep listening. (Not entirely joking, but he was likable enough that he is now one of my new "celebrity crushes" because his ideas were so refreshingly candid! He sounds like he would be fascinating to talk to in real life!) It was one of those books where you keep nodding your head like, "Oh yeah he is totally right. That is so true!" It is common sense but not the kind of thing you would think about until after you have a problem. Totally recommended reading for anyone who is in a relationship, wants to be or is just fascinated by human interpersonal dynamics.

Who knew  divorce could be so fascinating.  I never thought I would be so absorbed by a book with this subject matter. Jim is overall a great story teller and laugh out loud funny. A much needed look into relationships in the time of Facebook and social media.

Didn't need all the F bombs!

As a marital therapist, I found it interesting with some good points. At times the stories droned on. The foul language was hard to put up with for me.

A commercial for his practice. Horrible book. Would never recommend. I can’t believe my counselor recommended this, go figure I fired her.

Not a good book if your plan is be married

Honestly just finished the book because I already started. I don’t recommend it if you want be positive about marriage

Absolutely amazing work on this one from Mr. Sexton!
Personnal stories intricated with real cases analysis.
Finished it once for an overview.
Will study it one chapter at a time for real world implementation of the content i feel concerned!
5 stard without a doubt!