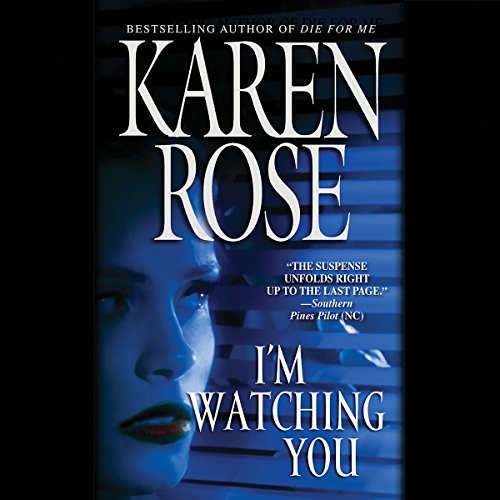 Written by: Karen Rose
Narrated by: Dani Cervone
Try for $0.00

I know their crimes.

Star prosecutor Kristen Mayhew has a dangerous secret admirer. He seems to know her every thought, her every move. He sends her letters. And he kills the criminals she herself is powerless to stop.

I hunt down the guilty.

This avenger even knows Kristen's deepest secret - the one that has kept her from surrendering her heart to Abe Reagan, the police detective sworn to protect her. Like Kristen, Reagan is haunted by the loss of something precious that can never be regained. But in the shadow of a calculating serial killer, the two turn to each other and dare to rediscover passion...even as the messages and vicious murders continue. Even as the killer's thirst for retribution makes Kristen a target for murder.

What listeners say about I'm Watching You

I enjoyed listening to this book. The narrator did a great job of making it very intense. I usually figure out “who dun it” before the end. This book kept me guessing and revising my theories until near the end. The storyline with the main characters was good.

This book was fantastic and I loved it all... until the last 5 minutes. Maybe it’s because it hits close to home for me but I just have to say: IT WAS FINE THAT SHE COULD NOT HAVE A BABY. NOT EVERYONE NEEDS CHILDREN TO BE FULFILLED. Also, I’ve had said cone biopsy. It is not a traumatic event, it does not take away your ability to have children, and it does not take away half of your cervix. The ending of this book just really irritated me. The woman in this book seemed somewhat smart until then. There is NO WAY you would have that procedure and NOT understand what it was. NO FREAKIN WAY.

So...I loved this book until it made me actually tell WTF.

This was a mostly enjoyable listen. There were some predictable situations and I figured out who the killer was, early on but, the whys took longer. The one thing that I didn’t appreciate is that the Heroine, especially since she knew better, had apparently never sought out treatment for her past trauma. Instead, she knowingly handled the situation the wrong way while counseling other victims otherwise. I despise hypocrites.

best of both worlds... romance and murder mystery

I love a good romance and I love mystery and suspense. These books give you a bit of both and keep you engaged and guessing until the end!!

I loved the story but there are way to many characters in this book to keep track of. Not as much romance in this book as there was in Have You Seen Her.

This book was not near as good as the last two...

And I want Michael Ferraiuolo BACK!!
This female narrator is alright but she isn't near as good as MF.
This book is a bit boring compared to last two previous books.
Just nit all that great in my opinion.

Really a great story! once I started listening I didn't want to stop. definitely recommend. excellent!

I loved it! It was both suspenseful and intriguing, I listened straight through. I can't wait to read another Karen Rose novel!

The many definitions of love.

A beautiful story of misguided love within the heart and mind. Justice has many faces.