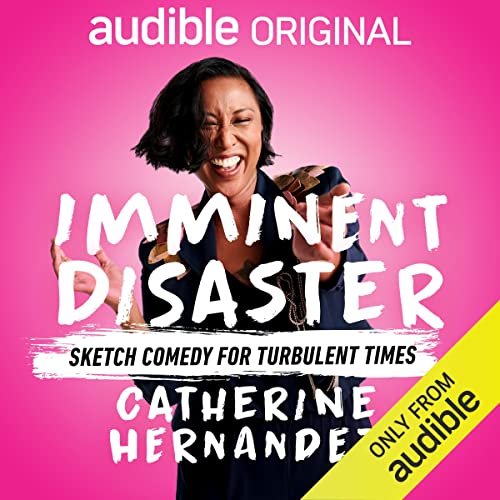 Catherine Hernandez (she/her) is an award-winning author and critically acclaimed screenwriter. She is a proud queer woman who is of Filipino, Spanish, Chinese, and Indian descent and married into the Navajo Nation. Her first novel, Scarborough (Arsenal Pulp Press), won the Jim Wong-Chu Award for the unpublished manuscript. It was also a finalist for the Toronto Book Awards and was longlisted for Canada Reads. Her children’s books include M Is for Mustache: A Pride ABC Book (Flamingo Rampant) and I Promise (Arsenal Pulp Press). She wrote the screenplay for the film adaptation of Scarborough, produced by Compy Films, which had its world premiere at the 2021 Toronto International Film Festival and was picked up for distribution by levelFILM. Her second novel, Crosshairs (HarperCollins Canada, Atria Books US, Jacaranda Books UK), was shortlisted for the Toronto Book Award and made the CBC's Best Canadian Fiction, NOW Magazine's 10 Best Books, Indigo Best Book, Audible Best Audiobooks, and NBC 20 Best LGBTQ Books list of 2020. She is the creator of Audible Original’s audio sketch comedy series Imminent Disaster.

What listeners say about Imminent Disaster

Catherine sounds like a lovely, heartfelt jovial person, but the stories portrayed here were lacking any real comedic impact.
The whole thing ended up feeling like it was like a grown up version of a children’s daytime tv show, especially since she has that kind of voice adults put on when talking down to a child, which in itself was especially weird when talking about going through menopause.

I’m not exactly sure who this audio series’s audience is supposed to be, but it surely isn’t for the more seasoned or sophisticated comedy fan or someone looking for opportunities to laugh out loud.

I hope Catherine finds her niche/audience that better makes use of her upbeat demeanour and go getter attitude.

This was just painful. Every skit was an absolute labour to get through. Who is the audience for this? Young mothers angry at the world and the only way that they can get back at it is by this incipit woke drivel. "We're being so funny and insightful, giggle". I feel bad for writing a negative review but no one should have to live through this.

I loved this series. Especially episode 2. that was my favourite. I laughed so hard.

Wonderful diversity in characters representing what I really see around me in the world.

And expertly crafted with nice jokes within jokes sprinkled in.

I had never heard of this comedian/writer before but will be checking out more of her work after this podcast.

Typically comedy includes jokes.
The first sketch goes like this:
1. Two woman are talking about how terrible the world is and how we are all going to die.
2. The first woman suggests they kill themselves early. The second woman, agrees.
3. The end.
What part of that was supposed to be the joke? Was it that you delivered it in the voice of a five year old? This is literally the opposite of a joke.. its just depressing.

The pick-me up with a side of coffee...

I so needed this podcast on my work commute this morning. Fictitious hilarious Imminent Disaster stories that are dead-ringers for what I've experienced in my life,... that made me nod my head (yes), laugh, smile, and reminisce, as I drove into work this morning. This podcast is what you'll need with your side of coffee. Catherine Hernandez says what you're thinking, what you wished you said outloud, and her great story telling abilities has you imagining all of the scenarios. You even find yourself talking back and clapping with laughter. I can not recommend this podcast enough. Imminent Disaster deserves more than 5 stars!

So far very funny, but seems like Episode 3 has been deleted/not included.... please fix?

This really hits my funny bone. I inhaled all episodes, adoring so much of it, admiring the whole. About to re-listen to favorite bits. Wow, I needed this. Thank you so much!