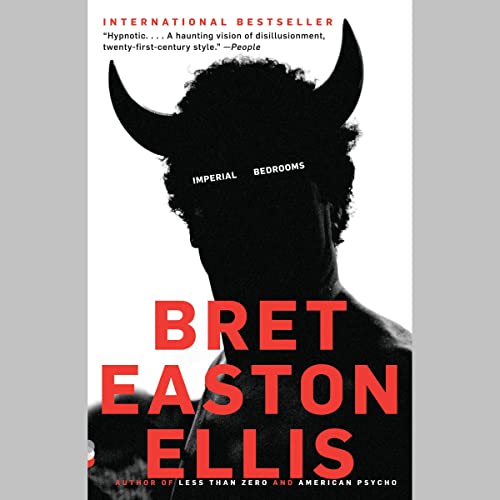 Bret Easton Ellis’s debut, Less Than Zero, is one of the signal novels of the last 30 years, and he now follows those infamous teenagers into an even more desperate middle age.

Clay, a successful screenwriter, has returned from New York to Los Angeles to help cast his new movie, and he’s soon drifting through a long-familiar circle. Blair, his former girlfriend, is married to Trent, an influential manager who’s still a bisexual philanderer, and their Beverly Hills parties attract various levels of fame, fortune and power. Then there’s Clay’s childhood friend Julian, a recovering addict, and their old dealer, Rip, face-lifted beyond recognition and seemingly even more sinister than in his notorious past.

But Clay’s own demons emerge once he meets a gorgeous young actress determined to win a role in his movie. And when his life careens completely out of control, he has no choice but to plumb the darkest recesses of his character and come to terms with his proclivity for betrayal.

"Ellis fans will delight in the characters and Ellis's easy hand in manipulating their fates, and though the novel's synchronicity with Zero is sublime, this also works as a stellar stand-alone." ( Publishers Weekly)
"A page-turner… Imperial Bedrooms is a quicker, more controlled fire than its predecessor, and, like a good showman, Ellis has learned to save the best of the novel’s many tricks for last…Devastating…Old age and treachery have served Bret Easton Ellis quite well.” (Foster Kamer, The Village Voice)
“Its dirty charms are indisputable.” (Amy Grace Lloyd, Playboy Magazine)

What listeners say about Imperial Bedrooms

It's great to hear Andrew McCarthy narrate this novel after having portrayed the protagonist on screen and formed part of that generation. More importantly, he's a fantastic narrator with great subtle irony. While not great literature, this is great entertainment although the violence gets rather gratuitous at the end.

The story isn't as good as Less Than Zero and the narrator for this just doesn't fit the book. While I still enjoyed it I decided to listen to it directly after listening to Less Than Zero having already read both books. It just pales in comparison to the immersiveness of the LTZ recording. Not saying he is a bad reader, he just doesn't work for this book.

If Californication had been Written by The Devil

A novel's protagonist who was a passive and directionless freshman in a famous "Less then zero" returns to LA again 20 years later and becomes mixed up in mysterious situation vaguely connected to crime.

Like a typical Chandler character he talks with different people and learns fragmented info about the situation and different characters' motivations.

There is also a familiar noir element of protagonist playing the parties against each other at one point.

The biggest difference perhaps is the more we learn about middle-aged and much more active and ambitious Clay, the more we suspect he might be one of the more narcissistic and evil characters in the story himself.

It is like a neo-noire where an anti-hero starts to look more and more like a villain as we move forward with him.

Ellis took a character who was kind of a passive criminal as a youth, ignoring the situations that perhaps it was unacceptable and pathological to ignore, and asked a question - would the years of experience make him an active criminal, a predatory person.

I must say even being an Ellis fan I mostly didn't get and like this novel upon a first reading, but got and liked it much more when I returned to it, being more conscious of details, knowing more about author's intentions and even seeing some of his newer work like the movie "Canyons", which has some similar themes and surprisingly made me understand this book better.

I still found some of the dialogue and narration akin to a pulp novel or a bad movie, which might be intentional, because the narrator is a B-level screenwriter who is said by Bret Ellis to narrate a story like one of his screenplays.

Oh well, I might like the bits I thought were bad the next time I re-read the book, maybe they just weren't obvious enough.

So in my opinion this is a better and deeper book then it might seem at a first impression, which might or might not also contain bad lines at times.

I loved the voice of Andrew McCarthy who reads the audio book, the only problem with it being that his voice for some reason sounds so kind and friendly to me, that I can't associate him with a book's villainous protagonist.

If you want the actor to really sound like a dark Ellis narrator it is probably better to go with James Van Der Beek who narrated "Linar Park" audiobook.

But listening to Andrew McCarthy narrate this book is also a pleasure, just a different kind.

Herky jerky story line. Not even sure what the story was supposed to be. Thought I was listening to the abridged version. Thank goodness Andrew McCarthy was the narrator because he was the only saving grace to this book. And he's not all that great. All the characters sounded the same. It's not a good book done in poor taste relying on lots of pitiful sex scenes to try to keep you interested.

Riveting to the last drop

Narrated by Andrew McCarthy, a.k.a. Clay, this will keep you engaged until the very end. If you’ve read Less Than Zero, you’ll be as excited as you are disappointed to learn the truth.

eh. It wasn't the biggest waste of my time ever. Rereading Less than Zero after 20 years and then this back to back I have to wonder what all the fuss was about. If you drink every time you hear " AND" you will be dead of alcohol poisoning like the protagonist is trying to be. One can simply not suspend one's disbelief enough to hear Clay's sociopathic friends diagnosing him repeatedly with sociopathy because...o yea, they are ALL sociopaths. More pointless than the first one AND any uni associated with BEE ought to be ashamed of its English dept.

It is an interesting sequel... but Ellis tries a little too hard at certain points.

Andrew read this beautifully and was the perfect choice. Fast paced and nuanced. Loved it.