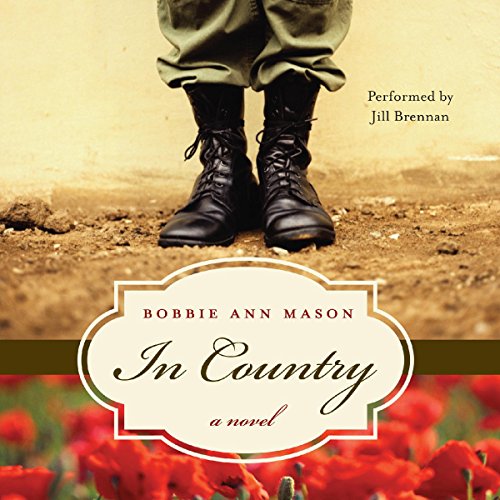 In the summer of 1984, the war in Vietnam came home to Sam Hughes, whose father was killed there before she was born. The soldier-boy in the picture never changed. In a way that made him dependable. But he seemed so innocent.

"Astronauts have been to the moon,” she blurted out to the picture. “You missed Watergate. I was in the second grade.”

She stared at the picture, squinting her eyes, as if she expected it to come to life. But Dwayne had died with his secrets. Emmett was walking around with his. Anyone who survived Vietnam seemed to regard it as something personal and embarrassing. Granddad had said they were embarrassed that they were still alive. “I guess you’re not embarrassed,” she said to the picture.

What listeners say about In Country

It seems odd and unfortunate that a story this powerful is capable of generating only one review in the last two years, that review being decidedly unfavourable. I'm no American (as you can tell by my spelling of the word "unfavourable") but I felt very at home within the world of this story and with the characters that populated it - once I got to know them. Unlike the other reviewer, whom I'm sure had her reasons for seeing things differently (bless her but she never bothered to expand upon them) I welcomed the accents. I wouldn't have wanted them any different. I thought they were entirely appropriate and well executed.

I am a admirer of the Norman Jewison film adaptation with Bruce Willis and Emily Lloyd which I re-watched before reading the novel. I couldn't get the presence of Bruce Willis or Emily Lloyd out of my head when their characters (Emmett and Sam, respectively) were speaking in the audiobook. Even though the film did a great job of encapsulating the story in under two hours, the novel dives deeper into the backgrounds and motivations of the characters and helps explain the relationships between them.

The novel gets high marks for mixing humour and tragedy so well. Everyone has a little hurt and a little sadness buried in their souls and no one gets pulled out of it unless they start the process themselves. There are setbacks and there are tragedies but there are triumphs along the way as people learn to change. The ending is heartbreaking but also joyful.

Perhaps this book has been avoided because it fascinates itself with the awful truth about the Vietnam War and what it did to the survivours who returned home and to the loved ones of those who did not. I can understand why it would be preferable to leave a reality such as that in the past and look only to the future. The Vietnam War happened to people far away from me in a place that was even farther. That might explain why I was able to immerse myself in this story. I have no links to the world on which it is based.

I think the book was well written and I think the narrator did an excellent job. As I said in the title, I might go back to the beginning and listen to it all over again. I probably won't but it will take a while to work this story and this voice through my system before I can comfortably settle into another story with a different narrator.

Story was credible, but the quality of scenes and characters was sabbotaged by narrator's accent.